Rise of the Indian woman: Historical shift in higher education

PLFS must consider that the 15-29 years’ workforce could have seemingly shrunk because more are in school and college. In the 18-23 bracket alone, AISHE data demonstrates increased enrollment year-on-year in colleges. 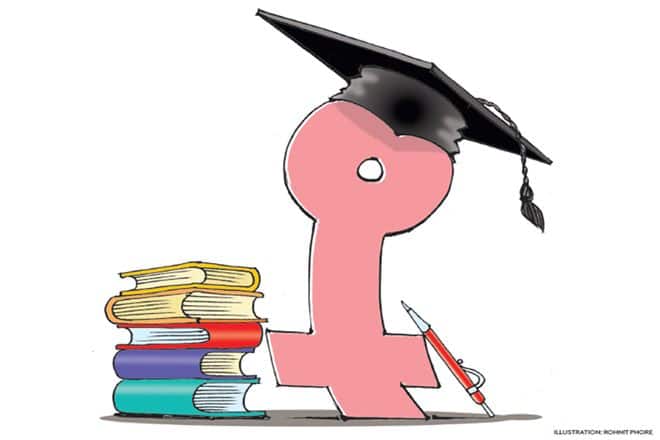 This is the first year that the all-India female GER has risen above male GER, which stagnated at 26.3

Every year since 2012, MHRD compiles and presents data on India’s higher education (HE) base through its AISHE reports. The recently released 2018-19 report affirms India’s rapid progression towards higher enrollment and inclusion. By harnessing this correctly, we can develop human capital to accelerate economic growth.

How is it that even though women enrolment in absolute numbers is lesser, female GER is higher? GER is calculated as the ratio of students enrolled to the eligible 18-23 age—in which there are fewer women, at 48.6%, than men. Interestingly, in the seven years between 2011-12 and 2018-19, the number of women in the eligible 18-23 age population increased from 6.7 crore to 6.9 crore whereas the number of men decreased from 7.33 crore to 7.3 crore. These dynamics combined with the rapid increase in women enrolment is yielding a female GER that is overtaking male GER. The 2020-30 decade will see the rise of the Indian Woman; as more educated women join the workforce.

Focus on expansion and quality
The number of registered HE institutions has risen from 49,964 in 2017-18 to 51,649 in 2018-19. AISHE estimates the eligible 18-23-year-old population was 14.2 crore in 2018-19. FICCI’s Higher Education report indicates GER could rise to 50 by 2030. Today, GER of 50 indicates a potential capacity of ~1,375 students/institution. Instead, because GER is only 26.3, average enrolment is 693/college. For now, India has adequate base infrastructure for rapid brownfield expansion, which is easier, quicker and more effective. The need of the hour is to expand and enhance our current institutions and improve quality of education and GER.

Graduates need follow-on employment opportunities
Total number of graduates who completed their course in 2018-19 is 90.9 lakhs, up from 89.7 lakhs in 2017-18. Tamil Nadu has India’s highest GER at 49, and third highest number of graduates at 8.64 lakh. Bihar’s GER is among the lowest in the country, at 13.6 barely up from 12.0 in 2011-12. It produced 3.81 lakh graduates, only 4% of India’s total. If Bihar with such a large population and high fertility rates does not focus on human capital development, it is a demographic disaster in the making.

Uttar Pradesh has the highest number of graduates—15.3 lakhs amounting to 16.8% of the total. The state has been the highest producer of graduates every year. Moreover, more than half the graduates are women! Providing these graduates with gainful employment in the state will greatly boost UP’s economy.

PLFS must consider that the 15-29 years’ workforce could have seemingly shrunk because more are in school and college. In the 18-23 bracket alone, AISHE data demonstrates increased enrollment year-on-year in colleges. MHRD data shows enrolment in secondary school and pre-university is also increasing, which means more children in the 15-18 age bracket are in school. Putting the two together, more than half of the 15-29 age bracket surveyed by PLFS are increasingly in school/college, which could account for the perceived drop in workforce participation. Secondly, after receiving an education, many women do not get employment opportunities in their home states. On average, men are more mobile than women and are able to move elsewhere in search of skilled work. Both these counts could explain the increase in unemployment rates among women as reported by PLFS. Today, PLFS is only conducted across 1.02 lakh households; there is need to expand the sample size while also considering education as a factor for perceived non-participation in the workforce.

Government’s focus on HE has benefitted previously disadvantaged classes who have developed dramatically. Representation from the population designated ‘general merit’ is regressing. Between 2012-13 and 2018-19, other groups increased by 17.2 lakh (SC), 7.5 lakh (ST), 41.8 lakh (OBC), and 10.1 lakh (minorities), while the ‘general merit’ enrolment decreased by 4 lakhs—from 45.6% representation to 35.7% in six years. NDA-II was probably responding to this decline when they instituted the 10% EWS reservation to support low-income families in general category.

AISHE clearly indicates aspirations are on the rise. We have enough capacity to get bullish on increasing enrolment and improving access to high quality education. We must build on the momentum to push this through to the peak of human capital development as India rises.