Expert Opinion: Why pulses are pricy and what can be done to bring rates down

While the pulses-MSPs are much below market rates, stocking caps and export bans are regressive steps 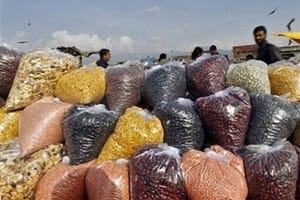 The price fall was witnessed across metros and other major cities: The price of tur, for instance, fell 24% between April 29 and September 4 in both Delhi and Mumbai; it fell by 17% in the month to September 4.

Pricy pulses are upsetting the food budget of many poor families. Soaring retail prices of dals—urad at R170/kg, tur/arhar at R160/kg, gram/chickpea at R127/kg, moong at R111/kg and masoor at R100/kg—are making dal a luxury for the dal-bhaat and dal-roti eating population. But not very long ago, wholesale prices of gram, arhar and urad stood below their Minimum Support Price (MSP). Inflation in pulses was 14% in August 2013, but started rising in the latter half of 2014, crossed the double-digit mark in January 2015, and thereafter, it was soaring at 58% in November 2015. Though it has declined somewhat since then, it still stood strong at 26% in June 2016.

Politically, such high inflation in pulses is damaging. As the Monsoon Session of Parliament started in July, Congress held a major demonstration against the Modi sarkar for its failure to rein in prices. Earlier, one may recall, how tur prices had become a rallying point in Bihar elections. Given that crucial state elections in Punjab, Uttar Pradesh and Gujarat are approaching, the Union government cannot afford to be complacent on this issue. It has swung into action by setting up an expert committee under the chief economic advisor, to suggest a way out. Any rational approach would suggest carrying out a thorough diagnostics first, of what led to this price surge, and based on that, suggest potential solutions.

Here is our diagnosis of what has led to shooting prices of pulses. Back-to-back droughts in 2014 and 2015 reduced production from 19.25 million metric tons (mmt) in 2013-14 to 17.06 mmt in 2015-16. With demand remaining somewhat sticky, imports of pulses increased from about 3.4 mmt in FY14 to 5.8 mmt in FY16. But if imports made up for the decline in domestic production since 2013-14, why did prices increase so precipitously? The answer lies largely in global markets.

Also Read
PEs lukewarm on realty
A case for nuclear energy
Understanding the four Vs of operations management – volume, variety, variation and visibility
Opening the gates

Take, for example, the case of chickpea (chana/gram). Its domestic production dropped from 9.53 mmt in 2013-14 to 7.48 mmt in 2015-16. Traders, however, estimate the 2015-16 production to be around 6 mmt. This put a lot of pressure for imports of chickpea. But, in Australia, one of the largest exporter of chickpea, production dropped by 31%—and by 21% in the US—in 2014-15. No wonder, with global supplies shrinking, and Indian demand for imports rising, global chickpea prices shot up since June 2014 from R2,800/quintal to R7,000/quintal in June 2016. This set the domestic prices of chickpea soaring during FY16, with its inflation still at 33% in June 2016. Fresh supplies are likely to come now from Russia in August-September and from Australia in November-December, and from domestic markets from March onwards. Almost a similar story is repeated in many other pulses’ prices. However, with monsoon likely to be above-normal this year, there is a possibility of the easing out of supply pressures on kharif pulses like tur, urad and moong from October-November onwards.

What has been the policy response? To curb surging prices, the government has tried to augment supplies by keeping imports duty-free. Recently, the government also signed a long-term contract with Mozambique for import of 100,000 tonnes of tur and other pulses in 2016-17, aiming to expand it to 200,000 tonnes by 2020-21. Indian teams are also scouting for possible government-to-government (G2G) imports from Myanmar and certain pulses-producing African countries. Export of all pulses (except kabuli chana and up to 10,000 tonnes/year of organic pulses and lentils) have been prohibited. The question arises: When imports are open at zero-import duty, why should there be export bans? High international prices can induce growers to increase production if exports are kept open.

The government is also inching towards a much-desired buffer-stock policy for pulses—it has decided to raise buffer stock of pulses from 1.5 lakh tonnes to 8 lakh tonnes and, recently, has also proposed to raise it to 2 mmt. Though a bit late, this is a step in the right direction. Remember, price stabilisation comes at some cost—creating and maintaining buffer stocks equivalent to at least 10% of production is critical to avert price surges.

The Union government has also directed states to impose strict stocking limits on pulses, and raid hoarders breaching that limit. Futures and forwards trading in all pulses (except squaring up of position in running contracts in chana) has been suspended. These measures are regressive and futile, and remind one of the controlled and rent-seeking economy of the 1960s. They also expose the hollowness in understanding of policy-making circles about the running of a market economy.

A bonus of R425/quintal on MSP of kharif pulses—arhar, moong and urad—has been announced to incentivise their production. But the prices thus fixed are still far below their respective wholesale prices. There is also a need for a crop-neutral incentive structure—the current one is tilted heavily in favour of rice and wheat. The input subsidies on fertilisers, power, water, and agri-credit, that wheat and rice consume in, say, a state like Punjab, cross R10,000/ha. If pulses have to be given similar incentives through bonuses, it would amount to a minimum of R1,000/quintal. Only then can a level playing-field be created for cultivators across crops.

The Union government has also urged states to delist pulses from the APMC Act and abolish local taxes levied on them. It would be good if it can lead by setting this example across all NDA-ruled states. Further, reconstituted dals from soya flour can be promoted to fill the wide deficit of proteins for the poor at a low cost.

Lastly, the government should recognise the huge failure of the Technology Mission on Oilseeds, Pulses and Maize, which has been going on since the mid-1980s, and dismantle that.