Pulses farming and the context of food system transformation in India

The study suggests that for promoting pulses, government schemes should look at the inherent heterogeneity within pulses and the intricacies in the larger cropping complex. 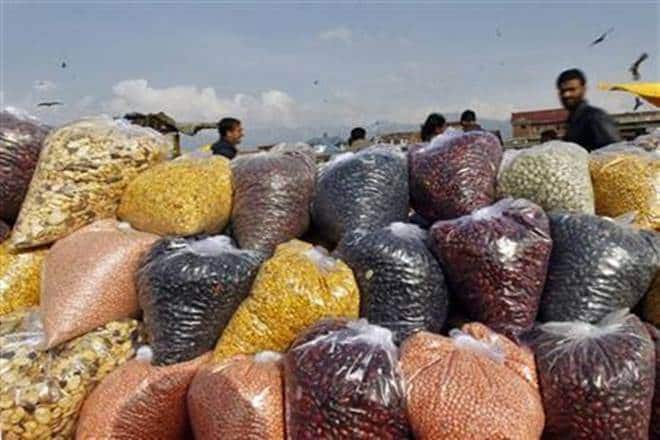 Even as the world celebrated February 10 as the World Pulses Day, the crop remains an enigma in India, notwithstanding the record 25 million tonnes produced last year. The story of pulses’ production and consumption in India has historically been marked by dwindling output and recurrent shortages. Even though India is the largest producer and consumer of pulses—25% of global production and 27% of consumption—domestic production has not been able to meet the growing demand. Every year, until 2018, 2-6 million tonnes were imported from Canada, Myanmar, Australia and African countries to meet domestic demand. Even with imports there has been a trend of declining per capita availability of pulses—from 62.19 gm/capita/day in 1961, to 39.45 gm/capita/day in 2013.
Ironically, the sliding performance of pulses in India began with the Green Revolution. India became self-sufficient in wheat and rice, but pulses lagged behind, literally crowded out by cereals. Production of rice and wheat, respectively, went up by over 225% (to 106 million tonnes) and 808% (to 95 million tonnes) in 2013-14 compared to 1960-61. But pulses grew merely 47% (to 18.5 million tonnes from 12.5 million tonnes), despite various schemes such as the National Food Security Mission (NSFM) and the Integrated Scheme on Oilseeds, Pulses, Oil palm & Maize (ISOPOM).
Inter alia, pulses seem to be suffering from the ‘Air India syndrome’—the responsibility rests with the government and the private sector is absent. Various factors can be attributed to its lacklustre performance. First, even with a conservative estimate, more than 80% pulses production is in rain-fed conditions and mainly grown as a residual crop on marginal lands. Poor availability of quality seeds, lack of market infrastructure and ineffective procurement add to farmers’ woes and increase price volatility. For instance, between 2012-13 and 2014-15, procurement of pulses was negligible (1-4% of production of pulses) compared to 28-30% of cereals; this forced farmers to sell their crop at a loss, as per a report by the Commission for Agricultural Costs and Prices, 2015.
While there are a number of issues with the pulses sector, there are fixes, too. In our research to assess the impact of pulses promotion in the states of Bihar, Uttar Pradesh and Odisha, we undertook different evaluation protocols to examine the sector in India owing to its unique characteristics and its position in the cereal-dominated cropping complex. The study internalises the fact that pulses comprise a whole portfolio not only in consumption with limited substitutability (chickpea isn’t used in sambar, for instance), but in production as well.
The study suggests that for promoting pulses, government schemes should look at the inherent heterogeneity within pulses and the intricacies in the larger cropping complex. We need to look beyond area, production and yield performance of the crop—the APY fixation. Adoption of technology or even the crop itself is often a discontinuous and non-linear process in pulses. Identifying this feature, our research tries to assess the characteristics of farmers who adopt pulses and investigates the tenure of their adoption. Effectively, we look into the microcosm of the larger ecosystem of pulses at the macro level by gauging the cases of adoption, dis-adoption and, at times, flickering adoption. We find that intricacies of pulses are reflected in farmers’ strategic waiting—farmers wait and watch results of other farmers who cultivate pulses—before deciding on pulses themselves. This wait is even after access to free, improved seeds. Also, being a heterogeneous set of crops, the external environment may differ across pulses and on that basis impinging upon farmers’ choices.
Who, then, are the takers of pulses and accompanying technology upgrade that we intervened with? Our study emphasises access to technology, credit (Kisan Credit Card), effective access to social safety net programmes like PDS, caste, landholdings, ownership of livestock and awareness about nutritional benefits bear on adoption as well as dis-adoption of pulses by farmers. Households with expecting mothers were more likely to cultivate pulses, even if it was on a small piece of land, reflecting possibly some nutrition consciousness. An important finding that speaks of the larger issue with regard to pulses’ standing in the cereal complex is that farmers with access to irrigation shifted towards cultivation of cereals and, therefore, the irrigation enigma needs to prioritised in case of pulses.
As far as the prospects of pulses are concerned, there is a need to look beyond the binary and take the tenure of adoption and even dis-adoption seriously. Programmes that assume compliance by implementing a pulses-centric intervention and not accounting for the larger ecosystem around pulses in the cropping system are bound to produce below-average results. Also, the heterogeneity across farmers and across pulses needs to be taken seriously. Our findings show that the role of risks, adoption of pulses or supply responses have to figure in the risk premium. A small change in price will not make a large difference in terms of adoption (acreage and intensification) as pulses are a risky crop. Pulses need to be incorporated into the cereal farming complex and understood from the context of food system transformation in India where secondary processed pulses might lead the way forward.
(Authors are with the Tata-Cornell Institute, Cornell University)

Follow us on
Latest News
GST dept steps up anti-evasion drive
Binance is set to buy cryptocurrency exchange FTX
India’s G20 presidency will be opportunity to share expertise with world: PM
Paytm loss widens after Indian fintech firm spends on expansion
Govt appoints 15 judicial, technical members at NCLT
MKU set to supply sighting system to ASEAN and MENA region
Justice Chandrachud to become 50th CJI on Wednesday
Photos
Lunar Eclipse 2022: Did you get a glimpse of Chandra Grahan? This is how the Moon appeared in different parts of the world
1 hour agoNovember 8, 2022
Happy Guru Nanak Jayanti! A festive look into the celebrations from across the nation
8 hours agoNovember 8, 2022
Dazzling & Astounding! Proposed design of the to-be redeveloped Dakaniya Talav Railway Station in Rajasthan-PHOTOS
3 days agoNovember 5, 2022
Read More
×
India must reinvent interest policy by surmounting past legacy
Muddying the waters
Green bonds: Work on the ‘greenium’
Premium
Tweeting blues
Given its track record, India has the moral heft to bring the developed countries to the negotiating table
Data Drive: The adpatation agenda