If ethanol substitutes for petrol, it must be priced at Rs 47 per litre but since the govt has massively over-priced cane, sugar mills need at least Rs 52 to be viable. 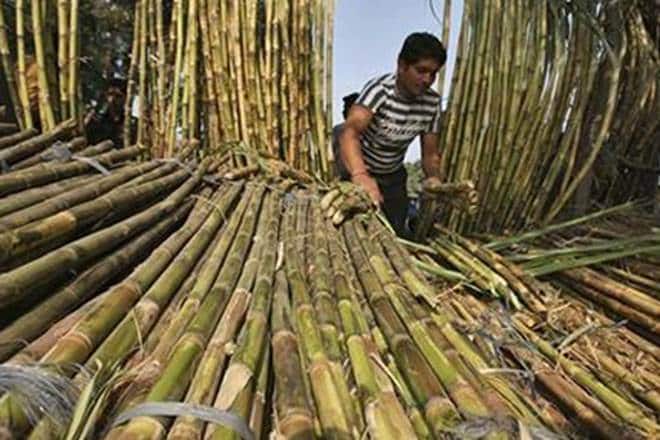 India will begin sugar season (October to September) with a sugar stock of about 10 million tonnes (MT). (Reuters)

Sugar sector is headed for a major crisis of plenty. India will begin sugar season (October to September) with a sugar stock of about 10 million tonnes (MT). Industry’s production estimate for 2018-19 is 35.5 MT, up from 32.3 MT in 2017-18, against an annual consumption of about 26 MT. Contrast this with production of just 20.3 MT in 2016-17, and one can imagine the enormity of over-flowing stocks. But the real problem is of zooming cane arrears, which stood at Rs 21,675 crore on April 15, 2018, up from Rs 8,784 crore a year earlier (see graphic). And it won’t be a surprise if these arrears spike further by 50-100% by April 2019, if no bold corrective action is taken quickly by the government. More than half of these cane arrears will be in Uttar Pradesh. And this may hit the Modi government hard, politically, as it heads for parliamentary elections, presumably sometime in March-April, 2019.

Before we think of possible solutions, we must get the diagnostics right. The root cause of mounting cane arrears is that, in 2016-17, domestic sugar production was as low as 20.3 MT, necessitating imports, and domestic sugar prices (ex-mill) crossed Rs 36/kg (see graphic). Global sugar prices were also high ($490/tonne in October 2016). This led to expansion of crop area, and with a good monsoon, improved the yield and recovery ratio, leading to a dramatic increase in sugar production from 20.3 MT in 2016-17 to 32.3 MT in 2017-18, a historic increase of 59%! This production boost substituted imports and replenished stocks, but it became a problem when world prices of sugar dropped by almost 50% to $244/tonne by August 2018 (see graphic), making Indian sugar non-competitive in global markets.

So what are the policy options when the sugar sector is jolted with such large volatility? The first option is trade policy. In June 2016, India had imposed an export duty of 20% to discourage exports as domestic production was low and sugar prices were high. In 2017-18, when production jumped, export duty was removed—though belatedly—in March 2018, and import duty was raised from 50% to 100% in February 2018. Although import duty of 100% seems very high, the direction of trade policy is broadly right.

The second policy option is exporting 5-7 MT of sugar. But at prevailing world prices, it is not feasible. Unless rupee falls further and global prices improve, export situation may remain grim. Exporting sugar through heavy subsidisation has its limits as exporting countries like Brazil, Thailand, and Australia may drag India to the WTO.

The third option is to create a larger buffer stock (of say 5 MT). It may help India stabilise prices in lean years. But it will cost quite a bit and, given the surplus supplies and low domestic prices, the sugar industry cannot bear this burden without government underwriting a portion of the stocking costs.

The fourth option is to divert cane to ethanol. The government has already taken a bold decision to allow ethanol from sugarcane juice or B-molasses, and deserves compliments for this decision. It will help industry diversify and reduce risk. Just to cite an example, in 2017-18, Brazil put almost 60% of its cane to produce ethanol as global sugar prices were depressed. Centre has also announced soft loans to the sugar industry for capacity expansion to produce ethanol. This is a proven technology and is much better than the idea of producing ethanol from agri-waste, an idea that some oil companies are toying with capital investments of Rs 8,000-10,000 crore. However, one critical point in this ethanol business is its pricing. Since ethanol is a substitute of petrol from imported crude, its pricing should be linked to import parity price of petrol (IMPP). At a crude price of about $75-80/barrel, IMPP works to around Rs 47/litre, after accounting for its refining and other costs. But sugar industry is asking for an ethanol price of Rs 52/litre based on its cost of production, where pricing of cane remains a key factor.

That brings us to the core of this problem, namely the pricing of sugarcane. Centre announces Fair and Remunerative Prices (FRP), but UP government tops it by issuing State Advised Pricea (SAP). In UP, SAP was about 39% higher than what its adjusted FRP would have been during 2010-11 to 2017-18. No wonder sugarcane remains one of the most profitable crops. For 2018-19 season, while GoI is trying to ensure 50% margin over A2+FL cost for kharif crops, in the case of sugarcane, this is already 87% at the all India level and 97% in UP. The problem is that SAP is quite divorced from prevailing sugar prices.

Ideally, cane prices should be a contract price between cane farmers and sugar mills with the government acting as a referee. The Rangarajan Committee on the pricing of sugarcane had recommended 75% of sugar price to be given to farmers as cane price. Karnataka and Maharashtra had agreed to this formula but UP did not. Anything above this 75% threshold mark speaks of political components in cane pricing. If UP government wants to give higher price for sugarcane than the 75% of sugar price, the best way would be to give it as a bonus directly to farmers, as Chhattisgarh and Madhya Pradesh paid for paddy (Rs 300/quintal) and wheat (Rs 265/quintal) respectively this year. A similar principle should apply to sugarcane. Else, if we force sugar industry to pay irrationally high prices of cane, it will be pushed towards sickness, large NPAs, and an even bigger mess.

Can the Modi government convert this crisis into an opportunity to reform sugar policies? If it does, it will be good economics and good politics, ensuring good votes from UP in the Parliamentary elections.