Peer-to-peer lending: Making a mark in the fintech market

A lack of market depth could derail the P2P model 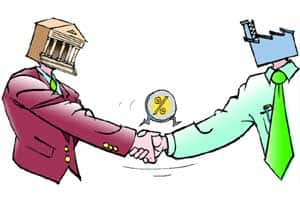 The peer-to-peer (P2P) lending model has arrived, and the market is becoming increasingly global. The market was led for years by the US and the UK, but China is already the largest P2P lending market globally, with more than 1,500 P2P platforms.

The UK has established itself as the leader among Western economies with $36 billion P2P loans granted in 2015 followed by the US with $22 billion.

Firms such as FairCent and others are emerging to occupy this space in India. They are addressing the under-served micro- and small-business segments due to large incumbent banks encumbered by NPAs on their balance sheets.

P2P lending was launched post the 2008 financial crisis with an intent to provide small loans for consumers—to find financing for routine purposes which the banks were not willing to give or when their offering was too cumbersome for consumers to deal with. The small business segment is large part of most economies, however, it is disparate and it has been traditionally challenging for banks to create the right distribution model to service the segment.

Today, we have seen a rise in small businesses using P2P as their financing platform and we expect to see a significant rise in this trend in 2016 and beyond. Globally, the unsecured credit card industry has shrunk close to 35% from its peak prior to the financial crisis. In line with this, credit (both secured and unsecured) contracted substantially in the small business sector. For many small enterprises, lending a few thousand or a few tens of thousands of dollars, euros, pounds, yuan or rupees through a bank is still a no-go. These factors have provided further impetus for the growth of P2P lending.

Fintech is a complex ecosystem and rapidly evolving. P2P lending start-ups received over 35% of venture-backed fintech start-up funding in 2015. According to the Business Insider framework, lending and financing constitutes a large segment of the opportunity.

P2P lending or online lending marketplaces, within the fintech ecosystem, have evolved and, today, there is a sophisticated and intricate system of interconnected players with investors, lenders, marketing players, credit bureaus, originators, borrowers, information vendors and soon-to-be-emerging regulators.

Three factors will determine the evolution of the industry as we look beyond 2016, responding to this question: Is this yet another asset bubble ready to pop?

First and foremost, is the rising amount of delinquencies, driven by rising interest rates and credit quality of borrowers. It is unclear at this stage how the portfolio vintages are stacking up. Most of the lending platforms lack the credit depth and business nuances to define this business factor.

Second, there are regulatory factors to consider. In 2015, the US department of the treasury issued a request for information on the alternative lending industry. Recently, the Office of the Comptroller of the Currency (OCC) issued a white paper related to responsible innovation in fintech, including alternative lending, and the Consumer Financial Protection Bureau (CFPB) set up a marketplace lending complaints service.

According to Business Insider, the UK, which had the largest P2P lending industry per capita as of 2014, instituted major regulatory guidelines on its alternative lending industry that same year. Since then, over a quarter of regulatory applications from lenders have been withdrawn.

Third is the size of the marketplace—is it large enough and will it expand or contract fuelled by competition from banks? Or will the banks remain fairly dormant or partner with many of the new players in the ecosystem?

Market depth, or the lack of it, could derail the progress of these disruptors and the business model, taking us back to the status quo. Consolidation is one option. But if that is to be, what would market expansion look like? Will regional players become global ones—through direct footprint or partnerships, perhaps?

Regulation is an inevitable outcome. How do P2P players respond in such an environment? It is critical that the market players, led by lending platforms, come together and form an industry group with a set of operating standards that address transparency, responsible lending, governance and controls, and risk management.

The association will be open for membership to any marketplace lending firm that meets certain criteria and agrees to the operating standards. This market group is critical not just for regulatory needs but the healthy development of the industry. The marketplace also provides the framework to collectively air the views to the regulators in a unified voice. We have precedents that offer learnings—the credit card, auto-lending, and mortgage lending industries have all witnessed similar developments.

Many of the Indian players have just entered the market and are looking to expand and develop their footprint.

There are a number of lessons that they can  draw from the US and UK markets.

Clearly, the platforms must focus first on credit-scoring models, developing client profiles and repayment patterns, segmentation for future treatment, managing the engagement with lenders and borrowers, etc. There are lessons to learn and best practices to develop.

The overall potential for fintech for small businesses  and, thus, for the overall economy is very promising. Small businesses do not just create employment but also are engines of growth the world over for self-employment, and harness economic potential.

It is pivotal for governments, regulators, financial institutions, entrepreneurs, lenders, borrowers, market participants, investors and lending platforms to play a responsible role and be supportive in the development of this powerful business model.

The year 2016 has already witnessed the first signs of headwinds by way of growth, delinquencies and regulation and market devaluation for publicly traded entities. The pace of change is unclear and whether the 2016 scenario is just a speed-bump or a pivot is hard to speculate. The magnitude of fintech as a catalyst for growth is hard to deny. The current momentum doesn’t seem like waning any time soon even though there are some hits along the way.

The author is chairman and managing partner, Elevate Innovation Partners