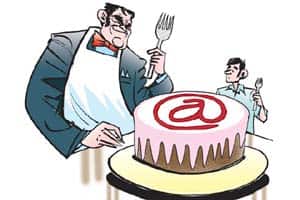 We must have a roadmap for affordable tariffs for the poor and those living in distant areas. Else, like in telephony, we will keep increasing the rural-urban and rich-poor digital divide

In the two years that have passed since the first consultation paper on ‘Over the Top’ (OTT) services was released by the Telecom Regulatory Authority of India (Trai), an incredible amount of noise (quite literally) has been generated in the system.

And it is not surprising. Disruptive technologies cause—you guessed it right—disruptions and spread short run pain in the system. Having emerged from very large payouts for the purchase of spectrum in 2010 and 2012, Telecom Service Providers (TSP) were looking to stabilise their businesses and bump up data services when Schumpeter struck. The dynamism of ‘creative destruction’ embodied in OTT services that can be provided over the internet—including mobile and WiFi—has meant greater access to the internet, but at the cost of disturbing the structure of telecom markets.

The ‘new’ unlicensed services (WhatsApp, Viber etc.) substitute for traditional paid services (such as SMS messages and calls), impacting established revenue streams that have customarily been used to fund investment in networks. It is of little consolation to the TSP that the use of OTT services can ‘create’ volume and revenue increases in the market for access along with possibly newer streams of data revenue. Ergo, Airtel’s proposal to begin charging customers more for making voice calls through apps like Skype and Viber. But this was quickly withdrawn on the back of sustained social media pressure in favour of net neutrality (NN). For the first time, perhaps, in India’s telecom history the network itself was used by civil society, politicians and celebrities among others as a medium to express passionate support for a neutral net. The extraordinary reaction to the TSPs’ intent of securing alternative revenue streams forced content providers such as Flipkart and NDTV to also hastily withdraw from their partnership deals with Airtel’s ‘Zero’ and Facebook’s ‘Internet.org’, respectively. The accompanying table captures the theatrics in the first six months as stakeholders attempted to come to grips with a new disruptive technology that was upsetting the established equilibrium. TSPs rued loss of revenue, civil society and start-ups remonstrated impressively against balkanisation of the ‘public’ internet, regulators grappled with the right instrument for intervention, and internet giants sought to cement network effects.  In the foreground there was massive political support for net neutrality whenever and in whatever form it got decreed.

Also Read
The case of female labour force participation
Time for pause
Up to the US Fed really
Understanding the four Vs of operations management – volume, variety, variation and visibility

Fears about modern technology are not new. Alarm bells start ringing, for example, whenever technology causes a likelihood of job losses. What the personal computer became in the 1980s, is what robotics and 3-D printing are today. But it is also true that the resilient economies restructure and expand, and technology is ultimately responsible for creating more jobs in the long term. It is the transition, however, that is traumatic. In telecom, similarly, there is no justification to repress the march of technology—it will eventually lead to newer applications for data services that will drive increased access and revenue for the TSPs. The potential short run tension can possibly be blunted by enlightened regulation, which need not always be an oxymoron. All actors, including telcos, OTT service providers’ and network operators share a collective interest in ensuring recurring investment in high quality and high speed networks. Consumers, civil society and young startups do not oppose that—what they oppose is exclusionary and competition damaging relationships between big OTT content providers viz. Facebook and Google with the telcos. In the accompanying table we attempt to capture the salient events in the next act of the NN drama in which regulators tried to enunciate a framework tariff policy for content services and the rules for collaboration between telcos and content providers.

‘Free Basics’ is at the heart of the relationship between OTT service providers and telecom operators. Earlier this year, TRAI barred Facebook’s Free Basics, the new avatar of Internet.org that sought to provide access to a limited internet at a ‘deep discount’ to first time users. Such price discrimination for data services based on content was seen to restrict consumer choice while severely distorting the playing field against small innovative startups, the essence of a pluralistic internet. It will be crucial for regulation to determine which new business models are consistent with promoting competition among providers and extending access for consumers. As stated above, Schumpeterian dynamics have remodeled revenue streams.

While service providers generate revenues directly from customers, OTT service providers make income from advertisements. The ‘free’ services come, for the most part, in exchange for personal data and to an extent from inter-operator settlements. In such ‘two sided’ markets, collaboration will perhaps be inevitable to support the massive investments required for broadband networks. Regulation needs to recognise this reality and the fact that most access will be via radio spectrum enabled smartphones. At the same time, consumers must be liberated from the clutches of digital gatekeepers that naturally emerge in this space due to the profound network effects. It’s a tough ask—and in the final act of this drama that we call squaring the circle, regulators have to decide on how to balance the several, often conflicting objectives. The concluding process has begun and the wisdom of the last two years will surely inform the outcome. Having been subjected to much invective in the last few months, the regulators should not, at this stage, abandon the cause; else there is a risk that the cause will desert them.

Kathuria is director & chief executive at ICRIER while Shreeti and Urdhwareshe are research assistants.
Views expressed are personal