Make in India eyes bigger role for MSMEs, but the sector sounds alert 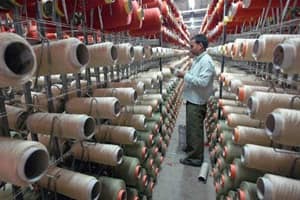 A plethora of programmes and schemes designed at making this sector more competitive have been introduced. (PTI)

At a time when the government’s Make-in-India initiative envisages a bigger role for MSMEs, a caution has been sounded: Contribution of manufacturing MSMEs in the GDP and total manufacturing output has decreased steadily in the recent past from 7.7% to 7% and from 42.2% to 37.3%, respectively, during the period FY07-FY13.

A plethora of programmes and schemes designed at making this sector more competitive have been introduced. There are over 350 different initiatives (sub-schemes, if you will) within the existing schemes of different ministries that MSMEs can benefit from. If you add to that the list of schemes that each state government provides, the support vector looks impressive.

Very broadly, the nature of such support can be classified under two heads– support for individual MSMEs to grow by enhancing competitiveness and joint activities, mostly to promote common infrastructure, and support from the various cluster/network-based schemes. But there is an urgent need to promote a third area of the support—the prosaic third eye (the gyanchakshu or the eye of wisdom).

Also Read
75 years of Independence: Where we were in 1947, and where we are now
Tech-ing the climate agenda forward
Why management is both art and science
Don’t lift foot off the pedal

According to some estimates, 70% of India’s manufacturing MSMEs are situated in clusters. The knowledge channel of MSMEs is, therefore, largely a function of the cluster system, a complex connectivity of principal firms with support firms and also other stakeholders including technical and financial institutions, independent service-providers and opinion-making bodies like industry associations, etc.

In most of the “underachieving” clusters, the knowledge system—whatever be the degree of complexity—is constrained by a knowledge cap. This is a function of their “horizontal existence”—firms produce similar items and compete fiercely for connection with the forward-linkage providers. As a result, the process of knowledge-sharing doesn’t have a business interest. Second, the source of knowledge-sharing is also restrictive with the usual, age-old channels in a cluster that require a near-similar product in a vicious price-cutting cycle. Thus even if some new knowledge slips through some interaction, it again gets trapped in the “competition” cycle.

However, if we can promote product-specialisation with strong vertical chains, knowledge-sharing will become a natural phenomenon as it will promote competitiveness. Going a step further, it is also important that such value-chain integration doesn’t come only through division of labour but also through locally-routed specialised knowledge bases that are continuously evolving, making them difficult to copy and erode competitiveness. A classic case is that of the sports-shoe cluster of Montebelluna in Italy. It grew to prominence due to product specialisation. But, eventually, the links to value-chain partners faded into oblivion as that specialisation was only based on division of labour, something that could be easily erased by lower cost labour in a nearby cluster. Thus, while the Montebelluna cluster got marginalised, the cluster of Riviera Del Brenta, situated close by, shot to prominence as it got linked to the global supply-chain partners that provided knowledge gathered from round the world. So, while the cluster created its own niche, it could not be copied.

This indicates that our traditional approach of firm- or CFC-based subsidy has natural limitations to knowledge growth since knowledge flow is limited. Connections with global knowledge come through specialisation, which in turn is a result of superior buyer connections. Such buyer connections push a unit towards specialisation because of the volumes of orders involved and the inputs flowing from buyers that source from across the globe. As a result, for the cluster, knowledge-sharing becomes a route towards achieving greater competitiveness as mutual dependency grows in creating the final product.

To promote this, we need a three-pronged strategy. First is value chain up-gradation, i.e., to incentivise outsourcing internally, such that knowledge, which is static within a cluster becomes dynamic, and externally, i.e., linking up with higher-order producers across the globe. The second strategy is cluster-twinning, i.e., to identify Indian lead clusters in India and link them to global lead clusters. In turn, over the years, these lead Indian clusters will become the knowledge gatekeeper for the Indian economy. The third way forward is opening knowledge-sourcing institutions in global lead clusters. Such linkages will lead to pockets of specialised knowledge within the cluster and firms will willingly share knowledge to maximise returns.

This will open up the third eye for MSMEs and help bring about the impact of the efforts the government is making in promoting them. It will promote Make-in-India on a much more sustainable basis.

The author is director, Foundation for MSME Clusters