Affirmative action: Agenda for sustained well being of the poor

For measuring the material well-being of bottom of the pyramid households, we need to follow an approach that takes into consideration both their income & expenditure… 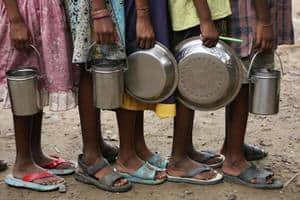 In an annual report, the FAO warned that a worst-case scenario of high-impact climate change would pound the communities that rely on agriculture for their livelihood, and food insecurity could spread to all regions. (Reuters)

The bottom of the pyramid (the poor) are indeed the leading focus of concern for affirmative action. The prime agenda is formulation of their sustained well-being. There are different ways to look at it, but there has always been a debate as to which one is better to analyse the inequality for measuring the monetary aspect of well-being. There is an option between using income or consumption as the indicator of well-being. There are both conceptual and reporting reasons, where one might prefer either consumption or income data when examining the level of and changes in the material well-being, especially of the bottom of the pyramid.

Economic theory proposes that consumption, rather than income, more directly measures the material well-being of households. Conceptual issues strongly favour consumption, while reporting issues tend to favour income for most people, but not for the bottom of the pyramid. However, using income may have its own advantages. But due to paucity of data on household income, most of the policy decisions related to benefits for the bottom of the pyramid are based on the National Sample Survey household expenditure data, which tells only the limited part of the whole story. To bridge the gap and to facilitate more informed decision, ICE 360° surveys of the People Research on India’s Consumer Economy (PRICE) are an important initiative that have been committed to provide the regular source of data on various indicators of well-being, including income and expenditure.

We firmly believe that taking both the indicators together into consideration is like an icing on the cake; this has been discussed in our earlier article “Measuring household well-being” (FE, April 29, http://goo.gl/XimE8E). In continuation, the current article focuses on investigating the bottom of the pyramid by using both the indicators together. Using ICE 360° (2013-14) survey data, we have standardised income and expenditure indicators following standard statistical techniques and a composite indicator was generated by averaging these two. As a second step, these three indicators were used to identify the bottom of the pyramid independently, which has been statistically validated. For instance, the Gini coefficient of income based on standardised per capita income quintile is 0.377, while the same for expenditure based on standardised per capita expenditure quintile is 0.334 correspondingly. Also, the Gini coefficient of income and expenditure based on income-expenditure together approach is 0.357 and 0.327, separately.

Using this approach, it is observed that the bottom of the pyramid (QIE1) irrespective of income and expenditure both constitutes approximately 16% of the total Indian households (42.35 million households). However, there are differences in their income share. Based on income quintile, expenditure quintile and income-expenditure together, it is 6.6%, 7.9% and 7.1%, respectively.

The survey reveals that chief wage earners (CWEs) of 54% of the bottom of the pyramid households are labourers. CWEs of one-fifth of the bottom of the pyramid households are educated up to higher secondary and above, which is half with respect to the national average. In addition, 63% of CWEs of the bottom of the pyramid are educated only up to the primary level, which is 1.5 times all-India average. Further investigation reveals the average annual household income is underestimated based on income quintile, overestimated based on expenditure quintile, and it is midway for the new approach. A similar pattern is observed at various occupational levels such as cultivators, allied agricultural activities, shop-owners, grade-4 employees, supervisory level, officer level and so on.

Clearly, the bottom of the pyramid households always struggle in maintaining their routine expenses due to their low income, which translates into minimal savings and a stressful life.

The harsh circumstances of their economic position are revealed when asked how confident they feel about their financial situation. An overwhelming 48% bottom of the pyramid household wage earners say they face great difficulty in meeting their basic needs. The lack of confidence about the stability of their major income source is cited as the main reason. Only 30% of these households express confidence about income stability. However, 29% of these households are optimistic that their economic situation will improve over the next three years.

In light of the above, it may be argued that assessment over a single parameter (either income or expenditure) might present results which do not reflect the reality. The suggested approach (income and expenditure taken together) appears to provide a better way of understanding the level of household well-being, and we believe it is worth considering in measuring economic well-being and also in identification of targeted population to provide necessary support and benefits.