Job creation and digitisation of agriculture: Why digital inclusion matters 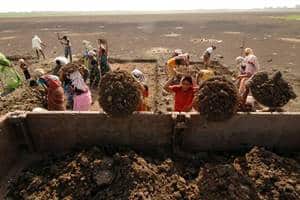 The finance minister while unveiling the Budget FY17 declared the government’s ambition to double farmers’ income in five years. Many have questioned if it is realistically possible to achieve this feat as it requires total real income to grow at around 25% a year for the next five years. Be that as it may, the government must be applauded for putting the focus back on the agriculture sector at a time when rural wage growth is on a decline.But what efforts are needed to give a thrust to the stagnant agriculture sector? While we mostly talk about monsoon, technological upgradation, minimum support price and various input subsidies; the rural-urban digital divide tends to get neglected.

Farmers and end- consumers in India are connected with a long value chain which is characterised by several stakeholders and this distance is increasing because of the poor agricultural marketing and rent seeking behavior of players involved in this chain. Inefficient agricultural marketing is a reflection of poor dissemination of technology in the country. Ability of farmers to reach market is possible through efficient network of Information and Communication Technology (ICT) which increases the farmers bargaining power and provides a chance to interact with trader and government agencies. ICT Development Index (IDI) 2015, published by UN International Telecommunications Union, measures the level of information and communication technology access. It ranked India a low 131 out of 167 nations. This is reflective of the poor access of the population to ICT services. Although India has made tremendous progress in raising its telecom density, the country remains far behind when it comes to providing internet access. The report noted that 43.4% of the global population has access to internet. In contrast, only 18% Indians have access to the internet.

So, what would happen if we are successful in raising ICT penetration in rural India consistent with its level of income? First, the IDI value for India improves from 2.69 to 3. Second, our international ranking would move few notches up up from 131 at present to 124. Third, and most critical one, the per capita agricultural income would go up by nearly 25%. This translates into per capita rural income increasing from Rs 40,772 (as per 2011-12 data) to nearly Rs 50,000. Thus, digitisation of agricultural sector can play a significant role in increasing employment opportunities, improving the standard of living in the agricultural sector and reducing the risk and uncertainties that our farmers have to face at present.

In this background, it is important for the government as well as the private sector to take initiatives to empower our rural population with the latest information and communication technologies. The launch of the National Agriculture Market (e-NAM) is a move in the right direction. Equally important is successful and efficient implementation of previously started projects like National e-Governance Plan, National Knowledge Network, National Optical Fibre Network, digital cities, etc. which will help in digital inclusion and empower the citizens to eradicate the digital divide. Also, the private sector too will have to play a key role to compliment government’s efforts. The competition from private players will not only bring efficiency into the processes but can also help in faster and greater adoption of digital services in the remote and rural areas.

(Anand is with the Indian Economic Service and is a research officer, department of economic affairs, MoF, and Sharma is MSc (Economics) with specialisation in agribusiness, Gokhale Institute of Politics and Economics. Views are personal)