Inside track by Coomi Kapoor: From Sukhbir Badal-Amit Shah meeting to Shinde’s talks with Raj Thackeray

Embarrassing stories about Chief Minister Bhagwant Mann’s misadventures are making the rounds and it is alleged that he is being remote-controlled by Arvind Kejriwal and his aides from Delhi. 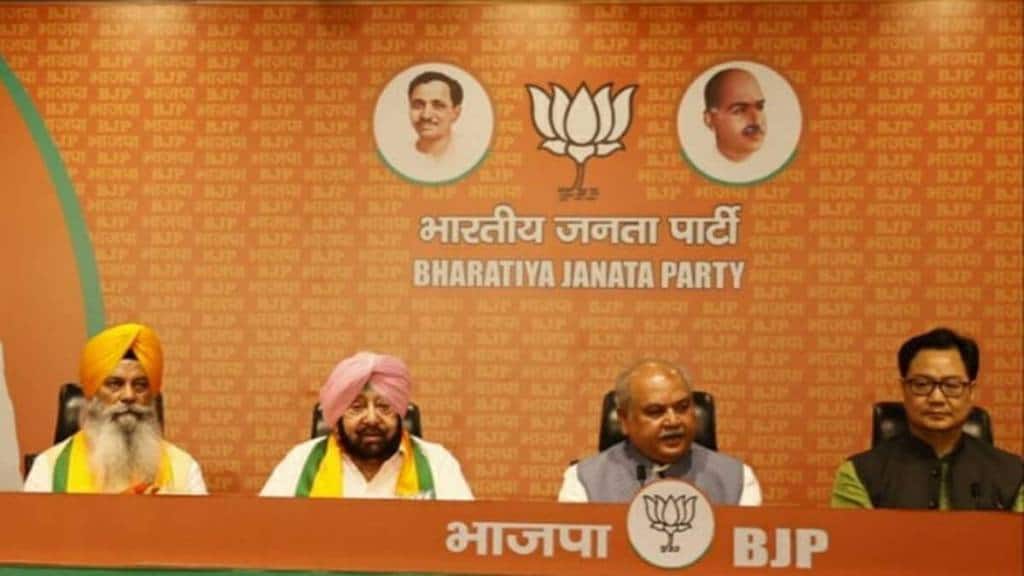 The BJP believes that if the Akalis join forces with the BJP and Amarinder Singh, it could replace the Congress as the main opposition to AAP.

Ghar wapasi?
Akali Dal chief Sukhbir Badal met Amit Shah recently, triggering speculation that the demoralised Akalis could rejoin the NDA. The BJP believes that if the Akalis join forces with the BJP and Amarinder Singh, it could replace the Congress as the main opposition to AAP. The Congress has been practically comatose after its assembly defeat, what with Navjot Singh Sidhu in jail and former Chief Minister Charanjit Singh Channi missing in action. Badal’s reservation about the proposed alliance is that Amarinder could take precedence over him. However, the BJP’s point is that at 80, Amarinder has a limited time left in active politics and a credible alternative is needed in Punjab. Embarrassing stories about Chief Minister Bhagwant Mann’s misadventures are making the rounds and it is alleged that he is being remote-controlled by Arvind Kejriwal and his aides from Delhi.

Royal reluctance
Amit Shah wants to convince former Rajasthan chief minister Vasundhara Raje to not contest the Assembly election next year. He has promised that in return for her sacrifice, the party will permit her to stand for the Lok Sabha from her son’s constituency of Jhalawar and be made a central minister in the 2024 government. Raje is one of the last BJP stalwarts who has political clout in her own right, irrespective of her party, and she is reluctant to surrender her claim over the chief ministership. She is afraid that if she does not contest the Assembly election, she will be at the mercy of the BJP Big Two for any position she hopes to get at the Centre.

Also Read: Across the aisle by P Chidambaram: The leader and the president

Two in one?
Rajasthan Chief Minister Ashok Gehlot happens to be a skilled magician who has often confounded his political adversaries by pulling a rabbit out of his hat, when cornered. The question being asked in Rajasthan is: will the wily Gehlot manage to have his cake and eat it too? Gehlot wants to ensure that arch rival Sachin Pilot is not appointed his successor as CM, once he takes over as party president. Party veterans believe that Rahul Gandhi would be wise to insist that Gehlot first resign his chief ministership before declaring his nomination for party president. If Gehlot tries to prop up his own candidate for CM, it is to be seen whether the long-suffering Pilot remain silent or opts for new pastures.

Defection op chief
Assam Chief Minister Himanta Biswa Sarma has become Amit Shah’s chief lieutenant in defection operations. The latest instance being Goa, where eight out of 11 Goa Congress MLAs were “persuaded’’ to jump ship. Himanta claims he helps out because, as a former Congressman, he is on friendly terms with many in his old party. (Incidentally, Bhupinder Yadav and Dharmendra Pradhan are two others active in catalysing defections to the BJP.) In Goa, the mass Congress defection was actually planned for July but it fizzled out because two Congress MLAs backed out at the last moment. This time, all eight were on board. It appears that former chief minister Digambar Kamat has been promised the ticket to fight for the South Goa Lok Sabha seat, which is one of 150 parliamentary seats which the BJP lost in 2019 and has been identified for special attention in the 2024 election. The recent defections are also a victory for Chief Minister Pramod Sawant, whose position gets strengthened since the wings of Vishwajit Rane, the number two in the Cabinet, and Sadanand Tanavade, BJP state president, automatically
get clipped.

What’s in a name?
Maharashtra Chief Minister Eknath Shinde spoke to Raj Thackeray on the last day of the Ganapati festival, hoping to form an alliance with the Maharashtra Navnirman Sena before the corporation elections. Though Bal Thackeray’s nephew’s party has been virtually wiped out, he, nevertheless, is bargaining for high stakes. He wants his wife Sharmila to be sent to the Rajya Sabha and appointed leader of the rebel Sena group in the Upper House. Another demand is for his son Amit to contest the 2024 parliamentary elections and, in case he wins, made leader of the Sena’s Lok Sabha group. As a concession, Sharmila will then step down from the Rajya Sabha. Raj assumes that despite his electoral setbacks, he is a prized political catch since the rebel Sena faction gets legitimacy aligning with a Thackeray family member.

Oppn jodo or todo
If Rahul Gandhi’s Bharat Jodo yatra is intended to unite the Opposition under the Gandhi leadership, party spokesperson Jairam Ramesh should be less acerbic in his comments towards Opposition politicians who express scepticism about the yatra. Ramesh described the CPI(M) as the “A team of the BJP” in smaller states. Another time he warned other parties that the Congress was the “sleeping elephant which has just woken up ’’and they better beware.

Follow us on
Latest News
Delhi pollution: Air quality in ‘severe’ category
Subaru says U.S. vehicle demand strong amid economic slowdown fears
No annual fee for Nov-March session this year, directs JK panel to schools
Key construction industry trends to look out for in 2023
Ethereum-base Arbitrum witnessed an increase in activity post Nitro update: Delphi Digital
S&P 500 fell 2.5% in worst performance for any Fed days since January 2021
Red Fort attack case: Supreme Court rejects review petition of Mohammad Arif, affirms death penalty
Photos
Heart-wrenching! Here is a look at Morbi and the suspension bridge that collapsed
3 days agoOctober 31, 2022
In Pictures: PM Modi in Kargil to celebrate Diwali with soldiers, says, ‘All of you have been my family for years now’
1 week agoOctober 24, 2022
In Pictures: PM Modi inaugurates Deepotsav in Ayodhya; World record set by lighting of over 15 lakh diyas
1 week agoOctober 24, 2022
Read More
×
Next Gen at Tata Trusts
Lula 2.0 can be a game changer
Premium
Towards zero stubble burning
Premium
One Bill to rule them all?
Voting for extremists
A shot at green leadership