While the new deal is certainly a step forward in Indo-US bilateral relations, there is little basis to rejoice yet 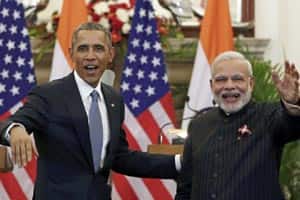 In a joint press conference, US president Barack Obama and prime minister Narendra Modi announced that a ‘breakthrough understanding’ had been reached on operationalising Indo-US civil nuclear co-operation. Neither the terms of this new understanding nor what catalysed this breakthrough are apparent. In a subsequent MEA briefing, officials stated that an India Nuclear Insurance Pool would be set up, which would be a ‘complete risk management solution for both operators and suppliers’. The announcement of such a pool, while the issue of contributions to such a pool is still a work-in-progress is curious. The statement by the US ambassador to India was even more curious saying that the understanding on the liability issue would operate “through a memorandum of law within the Indian system”. The hyperbole of the summit announcement could not be in more stark contrast with the details of its operationalisation. While the new nuclear deal is certainly a step forward in Indo-US bilateral relations, from the perspective of facilitating nuclear energy to secure India’s future, there is little basis to rejoice yet.

From the sparse information that has been made available, the major achievements of the deal from an Indian perspective lie in scoring diplomatic victories. First, the finalisation of the administrative arrangements necessary to implement the 123 Agreement with the United States is an important step forward. Second, making American negotiators seemingly accept the principle that Section 17(b), which provides the operators right of recourse against suppliers, is necessary in an Indian context is equally significant. Third, satisfying American concerns by providing an assurance of resolving outstanding liability of issues on the basis of a ‘memorandum of law’ rather than an amendment to the law itself, as has been sought, is a major diplomatic coup. But the key concerns stalling the operationalisation of the nuclear deal were as much commercial as sovereign. And cut through the wondrous accoutrements of diplomatic victories to key commercial concerns, and the landmark impact of the deal becomes far more questionable.

The establishment of the insurance pool to offset supplier and operator liability poses more questions than it answers. This is because official communications have been entirely silent on the key issue in the establishment of such a pool—who is expected to contribute and how much?

Also Read
Why legislate a Net Zero target?
In debt to the social sector
CCUS innovation can fast-track India’s decarbonisation
Understanding the four Vs of operations management – volume, variety, variation and visibility

Currently Sections 7 and 8 of the Civil Liability for Nuclear Damage (CLND) Act, 2010 read with Rule 3 of CLND Rules, 2011 provides for the establishment of such a pool with operators alone. Will this be extended to suppliers as well in the new India Nuclear Insurance Pool? If so, what will be the extent of their contribution? If such contribution results in an increase in cost of nuclear energy, as it inevitably will, would nuclear energy remain viable? These are the hard questions which will determine the effectiveness of an inchoate nuclear insurance pool in India, none of which have been resolved yet.

Further, the key commercial concern resulting in the impasse, Section 46 of the Act and the possibility of holding suppliers liable under the law of tort has been left largely unaddressed. US ambassador Richard Rahul Verma’s statement that a ‘memorandum of law’ is the basis for resolution is perplexing. The term ‘memorandum of law’ is an unfamiliar term for Indian lawyers. If the general commercial meaning of a brief by an attorney is implied, then in this case it refers to an opinion by the attorney-general of India containing the government’s understanding of the legal position pertaining to Section 46. If this is all that was required to assuage American concerns, then one wonders why such an opinion was delayed for over four years.

The truth is that beyond providing a seeming legal basis for the announcement of the deal, such an opinion will do little to assuage genuine commercial concerns, not just of American suppliers, but also Indian ones, regarding the scope and operation of Section 46. This is because an opinion of the attorney-general cannot bind judicial interpretation of the section. Section 46 provides that the Act will be in addition to, and not in derogation of other laws in force. Further, nothing in the Act will affect claims against operators under other statutes. This innocuous-sounding provision suggests that if suppliers can be sued under other laws, specifically the general law of tort that governs compensation for accidents, then their liability will be theoretically unlimited and unquantifiable. No insurance pool can address such unquantified liability fully.

There are two ways in which Section 46 can be interpreted. The first, favoured by the government of India, presumably contained in the attorney-general’s opinion, is that it is meant to govern liability of operators alone and is entirely silent on the supplier question. This is certainly intuitive—in an earlier draft, there was no reference to the word ‘operator’ in Section 46. Instead it merely contained the standard form provision found in most statutes providing that the Act applies in addition to all other laws in force.

However the imprecision of the wording of Section 46 and the lack of reference to suppliers, specifically claims under other laws, could equally plausibly mean that the Act has nothing to say about the admissibility of such claims. There are two reasons which reinforce this view—first, Section 17(b) which deals with recourse liability on suppliers demonstrates that the Act is not entirely silent on the question of supplier liability.

Thus when there is a specific omission, as in Section 46, it can be read as implying the continuance of the existing provision of law. Second, though the Act is envisaged as a special mechanism for speedy compensation for victims of a nuclear incident, nothing in this Act expressly makes this clear. Several types of nuclear damage, such as damage to environment or loss of income are made contingent on a government notification, which has not been issued yet. Thus the possibility of victims remaining uncompensated under this Act and suing suppliers is not mere theoretical fancy but a live possibility.

Irrespective of what the intention during the drafting process might have been, on a plain reading of the Act, the latter interpretation is more tenable. This is furthered by the fact that in the event there is a nuclear incident and victims remain uncompensated under the Act, a technical legal escape clause, or an attorney-general’s opinion will hardly withstand judicial scrutiny. Speedy victim compensation is the raison d’etre of the Act, and an interpretation that defeats it, without providing adequate compensation for victims is not merely untenable but arguably unjust.

The opinion of the attorney-general, and indeed the summit announcement on the whole, must be seen for what they are: a strong signal demonstrating the intent of the Government of India in operationalising the Indo-US nuclear deal and nuclear energy in India. They cannot however themselves be conclusive evidence of its operationalisation. For that, there must be honest introspection by the Government of India on the merits of its laws and a genuine owning up to oversights that may have crept in. It is when this is done that the gains from the ‘breakthrough understanding’ reached at the summit meeting will translate from diplomatic victories to actually breaking the nuclear logjam in India. Till then, the new nuclear deal will remain a work-in-progress.

By Arghya Sengupta
The author is research director, Vidhi Centre for Legal Policy, a New Delhi-based legal think-tank. He is also the lead author of a report titled Operationalising India’s Nuclear Agreements: Issues and Solutions on Nuclear Liability