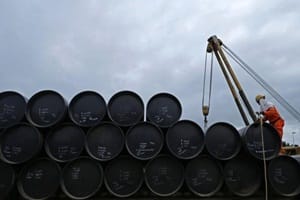 An important point that Ruchir Sharma makes in his new book, The Rise and Fall of Nations is: don’t ask what the world would look like if the current trends hold; ask what happens if the normal pattern holds and cycles continue to turn every five years or so.
It is anybody’s call whether oil at $100 per barrel was a short-term ‘current trend’ or a long-term normal. Be that as it may, it would pay to build out a scenario of oil going back to $100 per barrel to see how India’s current account could look. This will help (1) stress-test the strengths of the Indian current account in dealing with such a situation and (2) detail the policy imperatives that should act as a guide in an uncertain world.

Given the importance and magnitude of energy imports into India, the country has been surprised significantly—both on the upside and the downside—due to gyrating energy price movements. We build out a scenario of oil rising steadily over the next few years to say, $100 per barrel by FY20. We highlight that this is not the official forecast of Kotak.

Our assumptions on oil prices in this scenario (where price of crude rises gradually to $100 per barrel by FY20), our estimate of the crude import requirement and export potential and extra dollars required to fund the increase in net crude imports suggests that India’s net crude import bill could rise to $142 billion from $52 billion in FY16, an increased outflow of $90 billion annually, or 3.2% of the then expected GDP of the country. We highlight that the increase in prices of oil will also help in increasing the value of petchem and refined crude exports.

We highlight three key strategies that India needs to work on to find the extra foreign exchange required to fund its increased spend on energy imports. We estimate that (1) increased exports from traditionally strong industries, (2) saving in imports due to Make in India and (3) continued strength of IT and oil country-based remittances will chip in with $65 billion, $26 billion and $23 billion, respectively, for a total of $114 billion. While this will help cover for the increased outflow due to oil, none of this is a given: each will require significant work for the benefits to be realised.

Industries like agriculture, chemical products, gems and jewellery, textiles and transport equipment will need to lead India’s export story. We expect horticulture exports to become an important part of the agriculture export story, adding to the portfolio of rice, meat and mangoes: this will require India to spruce up its phytosanitary standards. Garments requires a large push in textiles for India to gain market share in the $800 billion+ textile export market: this will require introducing flexibility in labour laws to make the sector agile. We expect that the large capacities set up by many foreign auto players (banking on India’s frugal engineering) will be used to build an export base for Africa, east Europe and Latin American markets. Pharma and jewellery sectors are expected to build on their traditional strengths though the former will require better compliance with stringent FDA requirements.

Two key changes will be required: (1) a resurgent production from Coal India and its evacuation such that coal imports come down and (2) a sharp fall in import of electronic items—a key component of the Make-in-India initiative. We model a 15% annual decline in the value of electronic goods import—this will require significant investments in local sourcing by companies that currently simply import the stuff into India. White goods, mobiles and telecom equipment form the bulk of this import component. We expect gold import to remain broadly constant: If the real interest rates remain positive for a sustained period of time, possibly the ‘investment’ in gold can come down. We also model a leveling-off of machinery imports—this rests largely on the plans of various industrial companies wanting to make India an export hub.

India’s services sector has been the bulwark supporting its current account. We expect software exports to go up—we model a conservative 5% annual growth. If oil prices were to spike again, we should see an uptick in remittances from oil-producing countries—almost half the remittances to India come in from these nations. We highlight that, of late, the invisible services imports have started to inch up. We do not take into account a significant change in this segment, though this is surely something to watch out for.
On the whole, we believe that the current account of India is relatively better positioned to weather an oil spike; action could shift to the fiscal if oil boils.

So, where will the  pressure show up?

Low oil prices over the last couple of years have helped the government build up fiscal reserves and eliminate subsidies across many fuel products (diesel, gasoline among the major fuels). Depressed energy prices have also helped calm inflation through both direct and indirect effects. A sharp spike in prices, especially near the general elections in 2019, could test the building up of fiscal buffers via increased excise duties. As we have noted above, in our scenario, a $90-billion change in the cost of oil imports amounts to 3.2% of then GDP of the country; a part of this pain may eventually be borne by the government.

What if oil continues to remain cheap?

Prognosis of continued cheaper prices of oil should not mean any let up in the reforms and changes required to strengthen India’s trade balances. We highlight that countries which ended up as ‘Fragile Five’ were those that had poor current account and fiscal dynamics—India should make use of the current oil price bonanza to make a clean break from such a group.

(With inputs from Suvodeep Rakshit)

Akhilesh Tilotia is the author of The Making of India: GameChanging Transitions, and is an associate director with Kotak Institutional Equities
Views are personal