Rationing policies, like odd/even are likely to benefit only in the short-run 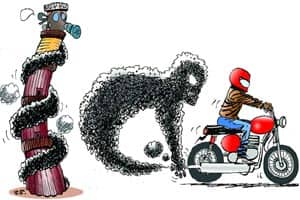 Environmental problems are fraught with externalities, and air pollution in particular is a classic example of tragedy of the commons—we share the air that we breathe but do not factor in the costs we impose by abusing the shared resource. As is the case with ubiquitous resources, regulatory institutions only step in when there is a threat to the free availability of such a resource. At present, ‘clean air’ has indeed become rather scarce and this growing concern has urged governments world over to intervene. One such intervention, in an effort to curb vehicular air pollution, is the recently implemented odd/even car policy of the Delhi government, which seeks to impose driving restrictions on private vehicles for a fortnight. Long-lasting success of such policies, however, hinges upon their ability to motivate individuals to bring a permanent change in their habits and this will largely depend upon the choice architecture (i.e. the careful design of the environments in which people make choices) made available to them.
Much has been said about Delhi’s proposed strategy, said to have drawn inspiration from the one implemented in 2008 by Beijing ahead of hosting the Olympics.

In its drive to improve air quality, the Chinese capital imposed driving restrictions based on the number plates of private vehicles. This two-month initiative seemed quite successful and, according to media reports, it had taken 45% of the 3.3 million car fleet off the streets and saw a 40% decline in daily emissions. After a successful stint, a slightly less restrictive version of the policy has become a permanent feature in Beijing. However,  impact evaluations of such rationing policies have found that while there may be short-term benefits with visible reductions in congestion and vehicular pollution, there is also a pattern of rule-breaking and circumvention of the restrictions through investment in an additional differently-numbered car in the longer run or shift towards use of less fuel-efficient, old (read used) cars. In addition, there has been limited evidence of increase in use of public transport subsequent to the implementation of the policy.

Taking a cue from other countries’ experiences of similar initiatives, non-pricing transport policies such as driving restrictions tend to be inefficient due to compensating responses like those mentioned above and their inability to factor in individual preferences, i.e., how much they may be willing to pay for each trip that may be of importance to them, as well as individual aspirations of vehicle-ownership. This is further exacerbated by the lack of last-mile connectivity which may leave several residents with limited choices as they attempt to reach the subway or other modes of mass transit, the probability of which may be high in developing countries that still lack well-functioning public transport systems. In the absence of supporting developments to existing infrastructure, the rationing policy might just be counterproductive and give rise to ancillary risks (such as increased vehicle-ownership). To deal with the problem of air pollution, regulatory institutions may provide market-based incentives, (e.g. allocation of tradeable property rights over the shared public resource, imposition of “green taxes” or provision of subsidies for using cleaner energy sources) that aim to shift the demand and hence reduce the total quantity consumed. An alternative approach to regulation of air quality could be one of command-and-control which may operate through one of the three means: ambient standards, source-specific emission limits or technology requirements. Given the experience of other jurisdictions, such rationing policies are likely to benefit only in the short-run, i.e., until individuals have had time to adjust to the change and found other ways to circumvent the situation.

This calls for the need to make concurrent changes that will work towards supporting the rationing policy framework. In this regard, a welcome move is the Supreme Court’s direction with respect to the ban on registration of diesel-run private cars and SUVs with an engine capacity of 2000 cc and above (upto March 31, 2016). However, while banning the new hazards is desirable, at the same time, old hazards may unintentionally get an extended lifeline in garb of ban on newer ones, thereby further exacerbating the harmful consequences on the environment. This is corroborated from the data recently released in an All India study conducted by M/s Nielson (India) Pvt. Ltd. (as reported by the Press Information Bureau), which shows that the transport sector accounts for 70% of all diesel sales and while almost 9% of this is attributed to commercial cars, the share of private cars and utility vehicles is much higher at 13%.

In order to ensure long-lasting effects of a pollution-control policy, initiatives that can cause permanent changes in individual behaviour are required. In designing effective regulatory policy, it is critical to recognise that differing levels of air pollution across cities does not reflect varied preferences of individual citizens but instead is dependent upon the choice architecture available to them. In this regard, a way to induce behavioural changes which is currently gaining popularity are ‘nudges’. As put forth by Richard H Thaler and Cass R Sunstein, ‘nudges’ are interventions that help in altering people’s behaviour by way of creating a choice architecture, without forbidding any options available to them. For instance, since consumers are hardly ever aware of their individual contribution in the deterioration of air quality, making their costs visible to them might urge them to consciously act upon reducing the same. To this end, adding an element of incentive in policy is required such as penalty structures in the form of fine for infringement, along with effective checks and balances. Also, to make the policies more palatable, various social marketing strategies can be adopted by proactive awareness initiatives. This enables them to make better choices on their own merit, by just having more information to appreciate the feedback their actions have on the environment on a regular basis.

Further, to improve air quality, odd/even road-space rationing policies are to be seen as short-term measures for long-term goals. Therefore, such ‘nudges’ would be effective only if there are simultaneous changes in the surrounding environment to support a permanent behavioural modification. Dedicated efforts in the direction of creating an eco-system to support these kind of initiatives should also be the focus, viz. strengthening public transport system to the point of last-mile connectivity. This can be complemented with supplementary measures like increased parking charges for private vehicles including two wheelers, combined with differential pricing policy in parking spaces, viz. cheaper parking charges for cleaner fuel vehicles. A good illustration of this are the Low Emission Zones (LEZ) that have been created in Greater London which operate 24 hours throughout the year. LEZs allow only those cars that meet the required standards, and are registered with the Driver and Vehicle Standards Agency, to pass through while other vehicles are required to pay a daily charge towards driving within that zone. Since most of Greater London is covered by LEZs, it induces vehicle owners to either convert their vehicles to run on gas or switch to vehicles that use cleaner fuels.

For the issue at hand, while an assessment of the environmental impact of the odd/even policy of Delhi would take some time, this is surely a welcome step in the direction of generating a wave of awareness and a sense of responsibility among the people. This can be seen in the ancillary benefits in form of a ‘detox’ drive—reduced traffic congestion that Delhi has experienced in the last few days.

Notwithstanding, even though there isn’t a perfect solution and each step taken would have ripple effects, any policy pill for pollution check would require weighing associated costs and benefits and hence prospective answers to questions relating to fuel and  parking policies, strengthening public transport system, spillovers to other sectors, etc. Rome was not built in a day, hence a plethora of small, yet sure, steps can sustain the government’s effort in battling with increasing vehicular congestion and (hopefully) pollution levels in the city!