Having continued as a public company for the last 42 years, how is the proposed conversion in the interest of Tata Sons? It’s difficult to accept that the conversion to private company has no correlation to Tata’s ongoing corporate battle with Cyrus Mistry and his family’s investment companies 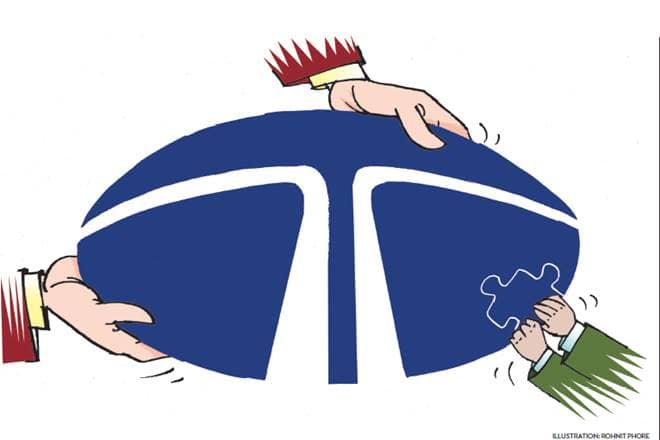 The majority approved to amend the company’s Articles of Association to undertake what its annual report terms as “certain corporate governance norms.”

The 99th Annual General Meeting of Tata Sons Ltd, held a few days ago, was significant for many reasons. Majority shareholders approved to give its preference shareholders voting rights in case of a default in dividend payment for two years. The majority approved to amend the company’s Articles of Association to undertake what its annual report terms as “certain corporate governance norms.” Shareholders also approved to amend its Memorandum of Association to change the name from Tata Sons Limited (Tata) to Tata Sons Private Limited following its conversion into a private limited company.

At first glance, these changes appear innocuous. But upon closer scrutiny, the changes proposed and their timing raises many questions. It strengthens Ratan Tata’s control, raising his effective shareholding to above 31%, and reduces the Mistry family to below 3%. The nuances are better understood in the context of the historical and legal landscape. In 1917, Tata Sons was originally formed as a private company under the then Indian Companies Act, 1913. Replaced by the Companies Act, 1956, it became what was termed a ‘deemed public company’ in 1975, but its Articles remained unchanged. The amendment to the 1956 Act in 2000 gave deemed public companies the option to once again become private companies upon intimation to the Registrar of Companies. Tata made no such application. The latest amendment to Companies Act, 2013, (Act) required Tata to either conform its Articles to the laws applicable to public companies or convert to a private one. Even then, Tata took no steps towards conversion for the past many years. Thus, having continued as a public company for 42 years, how is the proposed conversion in the interest of the company today. Also, it’s difficult to accept that the conversion to private company has no correlation to Tata’s ongoing corporate battle with Cyrus Mistry and his family investment companies. If approved, the conversion will impose immediate restrictions on the Mistry family shareholding and adversely affect their rights.

Post the shareholder vote, Tata is required to seek approval of the National Company Law Tribunal (NCLT) to move from a public to private company. The Act gives NCLT powers to “make such orders as it deems fit” upon satisfaction of all circumstances for the conversion. Notably, NCLT can disallow the conversion if it “would not be in the interest of the company or is being made with a view to contravene or to avoid complying with provisions of the Act.” Of significance are the words ‘interests of the company’ as opposed to interests of any individual or group of shareholders. As pointed out by a leading academic, the NCLT Rules rely on the noted principles of common law that any alteration to the Articles ought to be “bona fide for the benefit of the company as a whole.”

The Rules require the application for conversion to state the reasons for conversion into a private company (notwithstanding that the majority shareholders have approved it), and the effect of such conversion on all shareholders, creditors and other related parties. The Rules also give the right to “any person whose interest is likely to be affected by the proposed petition” of alteration to file objections with the applicant company, which have to be forwarded to the registrar of NCLT for consideration by the Bench. It is pertinent to note that the Rules give the right to file objections to ‘any’ person and unlike the provisions relating to oppression and mismanagement do not stipulate any numerical threshold. Additionally, the Rules use the words interests ‘likely to be affected,’ which clearly is a lower standard than prescribed under the provisions relating to oppression and mismanagement.

It is fair to expect that NCLT, while reviewing the conversion application, will consider that the resultant restrictions on Mistry family’s rights of share transferability or contrastingly a forced transfer are blatantly discriminatory. In fact, courts have held “an alteration in the articles whereby the majority may require any member to sell his shares to any other member is liable to be struck down if the compulsion is not for the benefit for the company as a whole.” So far the benefits, if any, have not been explained.

The Mistry family is certain to file objections before NCLT against the proposed conversion. As alleged in their letter sent to the Tata Board prior to the AGM, they term the conversion as mala fide having an ulterior purpose and a “device and design to equip the majority of Tata Sons with one more weapon to oppress the minority shareholders.” In its response, Tata, perhaps deliberately, provided an unconvincing explanation by stating the conversion is to “give effect to the intentions of the founding fathers” and that “maintaining the character of a private company is consistent with the practices of internationally recognised global corporates.”

Jurisprudentially, the majority shareholder decision “must be arrived at in good faith acting as reasonable businessmen” and “should be for the benefit of the company and not a section of the company.” If it isn’t, it may well be termed as a ‘fraud on the minority,’ where the word fraud is used to denote “such conduct of affairs as constitutes a discrimination of the minority of shareholders.” A leading English judge said a “special resolution would be liable to be impeached if the effect of it were to discriminate between the majority shareholders and minority shareholders, so as to give to the former an advantage of which the latter is deprived.”

It is now incumbent on the Mistry investment companies to show that the burdens and benefits of the alteration will not fall upon the members in like manner. They will also need to demonstrate that the conversion is discriminatory as it confers privileges on some and deprives them of their valuable rights. Additionally, the Mistry camp will be well advised not to mingle this legal battle with their ongoing litigation and contest this conversion independently, by moving away from the prejudicial effects of this action as being oppressive towards them to focusing that the conversion is not in good faith or for the benefit of the company as a whole.

Coincidentally, the same day when the majority shareholders of Tata passed the above discussed special resolutions, the National Company Law Appellate Tribunal allowed the waiver application of the Mistry investment companies. By all means a significant development as some of the fresh amendments to the Articles are likely to form part of the further and continuing oppressive acts that the Mistry legal team will seek to highlight. NCLT will now hear the Mistry petitions afresh and, while it did not grant any interim relief to the Mistry camp on the appointment of the new executive chairman, lawyers for the Mistry investment company are likely to press for some temporary protection, which NCLT should review afresh in light of these latest developments.

As the ancient Chinese military strategist and philosopher Sun Tzu said “the clever combatant imposes his will on the enemy, but does not allow the enemy’s will to be imposed on him.” Fresh legal battle lines are sure to be drawn and the fight is now open on two different fronts. By the look of things, the Mistry camp seems reinvigorated by its recent victory and appears charged-up to impose their renewed legal strategy on their corporate opponents.