For India, the closer the rate gets to 17%, the greater is the possibility of losing competitiveness in global markets 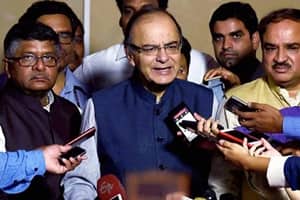 The Bill has been ratified unopposed by Gujarat Assembly," Speaker Ramanlal Vora announced in the House after the bill was passed by voice vote by BJP legislators in absence of their counterparts from Congress. (Reuters)

After the passage of the Constitutional Amendment Bill for introducing GST by both Houses of Parliament, it is worthwhile to take a look at the international landscape on GST and its effect on competitiveness.

Laos—one of the least developed countries (LDCs) from the region—implemented VAT from 2009, four years after India did. An interesting exception was Malaysia. Malaysia introduced a GST of 6 per cent only from April 1, 2015. In the immediate neighbourhood of South Asia, Bangladesh, Sri Lanka,

An interesting exception was Malaysia. Malaysia introduced a GST of 6 per cent only from April 1, 2015. In the immediate neighbourhood of South Asia, Bangladesh, Sri Lanka, Pakistan and Nepal had VAT in place from the 1990s, latest by early-2000s.

Most African countries also had VAT in place before India did with the exception of a few like Burundi, Congo, Gambia, Mozambique and Seychelles, who have done so during the last 7-8 years.

Globally, VAT is a more common and noticeable tax than the GST, with both being based on similar principles of value addition at different levels of the supply chain and levied on the consumer. Australia, Canada, Singapore and Pakistan are some of the GST appliers. Most countries, while imposing VAT, have not been able to entirely do away with other indirect taxes. Various other duties continue to exist. A common rate of VAT or GST of x% does not mean that the burden on consumers is limited to x% only; in most cases, the burden is x+% with the ‘+’ substantive in many cases.

Most countries, while imposing VAT, have not been able to entirely do away with other indirect taxes. Various other duties continue to exist. A common rate of VAT or GST of x% does not mean that the burden on consumers is limited to x% only; in most cases, the burden is x+% with the ‘+’ substantive in many cases.

The standard rate of VAT/GST varies widely across countries. In India, this has been a subject of intense debate with the eventual decision to cap the rate at 17 per cent. There are views that the rate might not be adequate for guaranteeing states sufficient revenues.

The international scenario in this regard is diverse (see accompanying table). While there are large country-specific variations, Europe & CIS countries as a region reflect the highest standard rate. Within this region, Scandinavian countries have standard rate of 25 per cent, which is among the world’s highest, followed closely by Uruguay and Argentina from the Latin American region with rates of 22 per cent and 21 per cent respectively.

The Indian revenue neutral rate (RNR) rate of 17 per cent, if fixed at that, will be well above the regional averages in Asia. Indeed, Southeast Asia has an average rate of only 7.7 per cent with the highest being 12 per cent in Philippines.

The low rate for the region is easily explained by the high volume of intra-industry among countries of the region. High VAT/GST rates would make raw materials and intermediates more expensive at every stage of the production process making the final product price high for the consumer.

Such a tax system would be detrimental for the global comparative advantages of producers from the region for various categories of industrial and processed items. This is in contrast to Scandinavian and other European countries that apply high VAT rates largely on redistributive grounds and also for funding social security mechanisms.

The Southeast Asian experience would point to the importance of keeping the mean rate low for ensuring global competitiveness of Indian producers. This is important given that even after GST, there would still be additional taxes on petroleum products and electricity services.

China has a relatively higher standard VAT rate of 17 per cent. This applies to goods with a separate business tax levied on services.

China is working on replacing business taxes by VAT and is expected to cover all major services including construction and real estate by the end of this year. This would, however, imply an indirect tax system with multiple VAT rates for goods and services.

The disadvantage, which a relatively high rate of VAT and multiple taxes could have caused for exporters, has been partly compensated by cheap export credit and input subsidies.

The difference in VAT rates between China and Southeast Asia also partly explains why China heavily imports semi-finished items from the latter, which are much cheaper than those at home, and assembles them in the mainland for exporting to the West.

The international experience points to the realisation that till GST becomes the only single overarching tax replacing all other indirect levies, the consumer might experience fairly high burdens. Indeed, Malaysia and Hong Kong have had great resistances to GST for their effect on consumer prices and the latter has succeeded in staying away from GST. The key to an effective GST that stimulates production and also protects purchasing power is its rate. For India, closer the rate gets to 17%, greater is the possibility of losing competitiveness in global markets.

The author is senior research fellow and research lead (trade and economic policy) at the Institute of South Asian Studies (ISAS) in the National, University of Singapore.
E-mail: isasap@nus.edu.sg
Twitter: @Amitendu1
Views are personal