Noxious air pollution, the collapse of natural food systems and extreme weather events have demonstrated the urgency to find cleaner forms of growth. 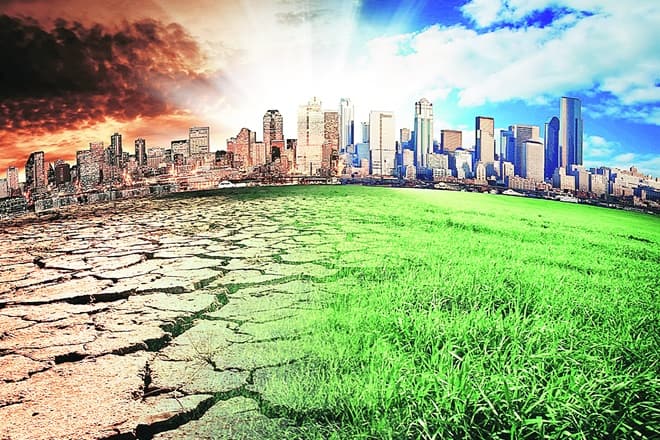 Noxious air pollution, the collapse of natural food systems and extreme weather events have demonstrated the urgency to find cleaner forms of growth.

Humanity is slipping into a precarious position as the environment degrades. Noxious air pollution, the collapse of natural food systems and extreme weather events have demonstrated the urgency to find cleaner forms of growth. The realisation that pollution is not just an inconvenient by-product but also a fundamental threat to growth has led to significant changes in the mind-set and political will. The longstanding narrative that growth and climate goals conflict has slowly, but surely, begun to shift in favour of convergence as evidence of adverse consequences of the resource-intensive growth model emerges. Accordingly, the compulsive and often reflexive focus on the costs of climate action is giving way to business opportunities from the ‘green economy transition’. Due to the inevitable rise in demand for clean technologies, countries that anticipate and develop appropriate skills and industries have much to gain. They can accrue value from  export of clean technologies and gain access to large markets. China has already positioned itself as the world’s leading exporter of affordable photovoltaic cells, Europe is innovating in wind and Japan and the US are churning out patents in electric vehicles. Countries that remain focused on fossil fuel will find themselves losing market share in a world that is transitioning.  We can think of this as a ‘green race’. Due to the time it takes to develop new industries and skills, and the lock-in effects, countries starting early will have a lasting advantage in the market for green goods/services.

Where does India stand in this green race? There are several ways to measure green competitiveness, scale, innovation, and trade. Countries with larger green sectors today have a head-start: they have already acquired some skills and capital to facilitate the transition. Those that are innovative will be better able to adapt and develop technologies.  Trade data can reveal a country’s global competitive position. In terms of scale, India is in a favourable position. It has a sizable industry in low-carbon environmental goods and services (LCEGS) and the third-highest LCEGS sales in Asia (second highest in terms of proportion of GDP) . A large existing market for green goods/services has several advantages, from knowledge spillovers to economies of scale and agglomeration benefits. In terms of green innovation, India has room for improvement, but has some important strengths. It famously engages in frugal innovation, which is immensely useful, but not captured by patent data. If we narrow our focus to high-value, patented inventions, India is in a neutral position. About 13% of the country’s high-value patents are related to green tech—in line with the world average. Its patent basket has a higher share of certain green tech when compared to the world average (see accompanying graphic), reflecting an innovation specialisation. These technologies include green buildings, carbon capture and storage, climate change mitigation technologies related to production and processing goods, and water-related adaptation technologies. India’s share of patents in water-related adaptation technologies is four times higher than the world average, indicating a distinct advantage, as also a grave need. According to recent data, water in the country’s 91 reservoirs is at just 27% of total capacity. India is facing a severe water shortage, and capitalising on the knowhow we have created and complementary support policies is critical. Overall, India is not a leading inventor, although it performs significantly better than other low- to middle-income nations. In 2013, India successfully filed 1,140 high-value green patents while Brazil filed 300 and South Africa 150. However, China filed 16,000. The vast majority of green patents are concentrated across a few nations.

Also Read
A giant leap
Bad news for newsletters?
Why management is both art and science
Understanding the four Vs of operations management – volume, variety, variation and visibility

Long-established innovators such as Japan, the US and South Korea account for nearly 60% of the world’s green-tech patents. But, just like China’s level of patenting shot up over the last 15 years, so can other countries’. India has already seen a significant rise in its share of green patents in the last 20 years (see figure 2). Evidence shows that pricing carbon or phasing out fossil fuel subsidies can boost green innovation, making India more competitive in the industries of tomorrow. In trade, India specialises in smart grids, wind energy, hydel and biofuels . In India’ export basket, the share of wind energy is 1.7 times the world average and the share of smart grid technologies is over double the world average. Hydel and biofuels are also relative strengths, but to a lesser degree. While India enjoys a comparative advantage in these sectors, it is still not a large exporter. In 2013, India accounted for only 2% of global exports in contrast to China’s 13%. Nevertheless, there is much room for progress. India’s low-carbon exports have tripled in the period between 2001 and 2013. With these remarkable growth rates, India can build on existing advantages to prepare for the green economy transition. In particular, wind energy is a strategic opportunity. India enjoys 10 GW of wind turbine manufacturing capacity, which is three times higher than domestic demand, providing an export-growth window. India’s competitors in this space include Europe, although the former’s wind turbines are tailored to slower wind speeds—a unique niche in the market.

India’s lower labour costs give it an additional competitive edge. It also has domestic scale in wind, with the fourth largest installed capacity in the world. Tamil Nadu alone produces more wind power than Sweden or Denmark. Such scale in wind signals a maturing market with relevant expertise. Smart grids also present a significant economic opportunity. India can capitalise on its comparative advantage in smart-grid technologies to boost exports. It can also harness innovation in smart grids to address its own efficiency problems. Currently, transmission and distribution losses are very high: over 20% is lost in distribution nationally, some states report losses in excess of 40%. Smart grid technologies can help address this problem, saving India from costly black-outs and power shortages. There is a promising opportunity that India should not miss. Through supportive policies encouraging the growth of green sectors, it can strategically build export markets, attract FDI and leverage its IT prowess to advance smart-grid technologies. The knock-on effects of developing clean industries are large, especially because they can address water and air pollution issues, which are fated to become worse. We strongly believe the narrative is no longer about the costs of green growth, but about the immense opportunities. We need to win the green race, and defy the preordained.