From plate to plough: Over Rs 45 lakh crore plundered from farmers

Until India structurally reforms its agri-economy, a stable income policy for farmers is required, for at least the next five years 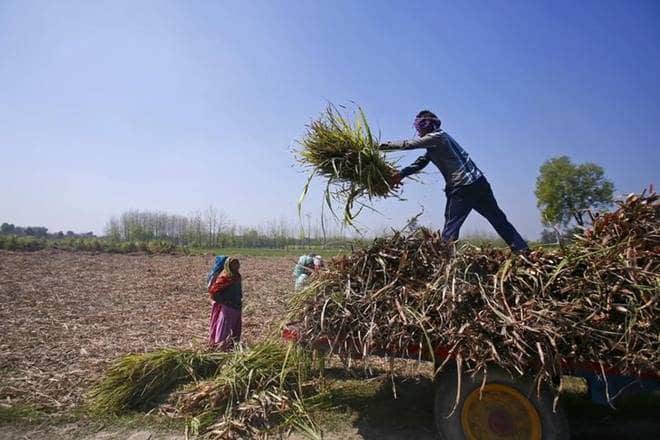 From plate to plough: Over Rs 45 lakh crore plundered from farmers

The Modi government is entering its proverbial phase of the ‘last ten overs’ before the Election code of conduct kicks in. All plugs are being pulled off to win over the targetted segments of society who could potentially bring BJP/NDA back to power.

One important segment, perhaps the largest one, is that of farmers. Attempts to woo them by announcing higher minimum support prices (MSPs) based on 50% margins over paid out costs plus imputed value of family labour (cost A2+FL) have fallen flat on its face as market prices of most of those commodities remain 20-30% below MSPs. Procurement by government agencies has been limited as they already have overflowing stocks that they cannot offload without incurring massive losses. The meagre budgetary provisions under PM’s AASHA scheme to lift market prices have therefore failed to erase farmers’ nirasha (gloom). In any case, as highlighted in my last piece (bit.ly/2HiWcJg), MSP policy cannot reach more than 20% of peasantry even with augmented procurement of pulses and oilseeds and, therefore, cannot be a solution to farmers’ distress.

READ ALSO | IRCTC users alert! You won’t be able to book tickets on irctc.co.in e-ticketing website if using these systems

The loan waiver, which the Congress president is promising, will also not benefit more than 30% of peasantry, who have access to institutional credit. Already, the bill of loan waivers for the state governments that have announced loan waivers is touching about `1.8 trillion (lakh crore). The policy of zero interest on loans, too, is fraught with loopholes leading to a massive diversion of funds out of agriculture.

So, now, many state governments are trying to innovate with new ways of reaching the largest number of farmers. The Rythu Bandhu scheme of Telangana that involves the giving of `4,000/acre to land owning farmers for two seasons in a year is costing roughly `12,000 crore per annum to the state exchequer. It seems to have reached more than 90% of farmers, and has given good political outcomes. Many experts have criticised it saying that it is for big farmers and neglects tenants.

Kalia (Krushak Assistance for Livelihood and Income Augmentation) scheme of Odisha attempts to respond to this criticism, and accordingly promises to include not only land owning farmers (up to 5 acres) but also tenants and agri-labourers. While land owning small and marginal farmers, 30.17 lakh in number, accounting for 92% of farming households in Odisha, will get `5,000 per family for 5 seasons, the tenants and agri-labourers (estimated to be 10 lakh in number) who have no land records will get a one time payment of `12,500 per family, and vulnerable families (another 10 lakh) will get a one time payment of `10,000 per family . With some support for life insurance and interest free loans of up to `50,000, the scheme is likely to cost about `10,180 crore over three years. There is a major challenge of identifying who is a tenant and who is an agri-labourer, as tenancy is not legally allowed in Odisha. So, no legal records exist. Only time will tell how efficiently this identification is done. But given that it is just a one time payment for them, it will have a limited impact only. Efforts are on to ensure that the first payment is made in January 2019 itself.

It is important to track and evaluate the performance of these two schemes (Rythu Bandhu and Kalia) as they have not only important budgetary implications, but are also a pointer towards a new policy innovation. West Bengal and Jharkhand are also moving in this direction, and media reports suggest that the Centre, too, is contemplating some variant of the scheme. If indeed it does so, it would indicate a tectonic shift in policy from promising higher MSPs or loan waivers to direct income/investment support to farmers. This shift will be better for the country as it is more predictable and less market distorting.

Macroeconomists and investors, however, are worried how much it would cost. Will it be fiscally sustainable? What impact will it have on investments in due course? In brief, will these election time ‘doles’ do more harm in the medium- to long-term? Is India not becoming a welfare state even before generating enough wealth? All these concerns are very legitimate and need some discussion. Let me elaborate.

In several pieces in this newspaper in recent months, I have indicated these are not ‘doles’ but atonement for not reforming the agriculture sector, especially its marketing and trade policies, which remain highly distorted, restrictive and pro-consumer, often at the cost of farmers. One of the key findings of a mega ICRIER-OECD study on agricultural policies in India (2018), which I co-lead with Carmel Cahill for more than two years, is that the producer support estimate (PSE) for India was minus (-) 14% of gross farm receipts, on an average, for the years 2000-01 to 2016-17. What this implies is that Indian farmers have been ‘implicitly taxed’ through restrictive marketing and trade policies that have an in-built consumer bias of controlling agri-prices. If one calculates the sums involved of this ‘implicit taxation’, it amounts to `2.65 trillion (lakh crore) per annum, at 2017-18 prices, for 2000-01 to 2016-17. Cumulatively, for 17 years, this comes to roughly `45 trillion at 2017-18 prices. No country in the world has taxed its farmers so heavily as India has done during this period. This is nothing short of plundering of the farmers’ incomes by `45 trillion! Until India reforms its agri-marketing laws, and frees agri-markets, it is time to atone through a structured and stable income policy for farmers for at least the next five years.

It may be worth noting that the PSE methodology is a standard one that OECD adopts for 52 major countries that produce more than three-fourths of global agri-output. And these numbers have gone through a rigorous review by OECD members and others at the global level and are now very much in public domain.