From Josy Joseph’s ‘A Feast of Vultures’ to Rahul Gandhi on Donald Trump, an insider’s account

Lalu Prasad’s advice to his eldest daughter Misa Bharti, a first-timer in Parliament, was that she should respect and pay heed to elders. 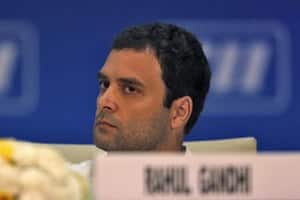 Rahul had yesterday told the Supreme Court that he had never blamed RSS as an institution that killed Mahatma Gandhi but had stated that a person associated with it was responsible for his assassination. (Reuters)

Investigative journalist Josy Joseph’s book A Feast of Vultures, which deals with corruption at all levels of Indian society, opens a Pandora’s box. The book highlights some forgotten corruption cases involving the rich and the powerful, which the CBI failed to unravel. The HDW submarine scandal was closed by the CBI on the grounds that it could not find evidence to back the claim of HDW representatives that they had paid to Indians 7% of the $380-million contract amount in 1981. Joseph has unearthed something that the CBI strangely enough either missed or ignored. The family of a former naval chief was one of the financial beneficiaries of a trust fund set up in Liechtenstein in 1987. Some of this money was used to buy a property in an upscale London neighbourhood. The admiral’s family uses this property as their official residence.

In another curious case, the family of a former Army chief, who was later appointed a state governor, sold one of their companies to a man whose business was under investigation by the CBI for alleged involvement in manipulating arms deals. The General’s family owned a company which held a plot valued at R19 lakh. Mysteriously, between 2005 and 2007, the value of the plot went up almost a hundred times to R9.06 crore. In 2006, all the assets of the company’s book value went to another company in which the alleged arms dealer was a director. Within a year of the takeover, the land valuation was brought back to R19.78 lakh. Josy links the unusual deal to the grant of clearances for setting up a shopping mall in the state during the period when the General was governor.

In a rare appearance in Parliament’s Central Hall last month, Rahul Gandhi gave the first public indication that the Congress would back the GST Bill (it is believed that his sister Priyanka persuaded him that the Congress should not give the impression that it was obstructing a key economic reform). Newspersons were keen to ask questions on the forthcoming elections in Uttar Pradesh and Punjab, but Rahul evaded the queries. He preferred to discuss the US elections. He felt that Donald Trump might win because of an increase in right-wing sentiment the world over. Although Trump has sometimes been compared to Narendra Modi, Rahul did not criticise the Republican nominee.

Misa in the House

Lalu Prasad’s advice to his eldest daughter Misa Bharti, a first-timer in Parliament, was that she should respect and pay heed to her elders, but for the rest, he left it to her to find her own way. During her spare time, Misa does not mix with a group of elite women MPs, including Kanimozhi, daughter of M Karunanidhi, Supriya Sule, daughter of Sharad Pawar, and Harsimrat Kaur, the wife of Sukhbir Badal. Instead, she is often seen in Central Hall with Dimple Yadav, wife of Uttar Pradesh chief minister Akhilesh Yadav. Misa, who trained as a doctor, although she never practised medicine, would like to be on the parliamentary committee for health.

Is Air India losing JRD Tata’s legacy to the new Tata-owned airlines Vistara? Former Air India executive Jitender Bhargava points out that he had the opportunity to fly on both airlines last week on the 112th birth anniversary of JRD Tata. Vistara announced JRD’s birth anniversary on the flight, describing him as the father of Indian civil aviation and presented passengers with a commemorative bookmark. On the Air India flight, there was no mention of the man who founded the airline.

Pushpa Sasikala, the AIADMK MP who was expelled from her party last week after she claimed in the Rajya Sabha that her party leader had slapped her, was seen shortly afterwards talking to Ahmed Patel and requesting a meeting with Sonia Gandhi. A former mayor of Tuticorin, Pushpa has become a persona non grata in her state and AIADMK MPs are scared to even say hello to her, let alone answer journalists’ queries about her differences with Jayalalithaa. It seems that complaints against Pushpa had reached Jayalalithaa much earlier, including the allegation that she was protecting the sand mafia. But the AIADMK chief gave her a long rope. However, after she publicly slapped DMK MP Tiruchi Siva at the airport, Jayalalithaa had had enough. Pushpa refused to resign. Her defiance in the AIADMK is unparalleled.