The government has to take some drastic measures such as capping procurement for maintaining optimum foodgrain stocks, increasing issue price of foodgrains, rolling out DBT in cities, and curbing grain pilferage through digitisation for checking the spike in food subsidy budget. 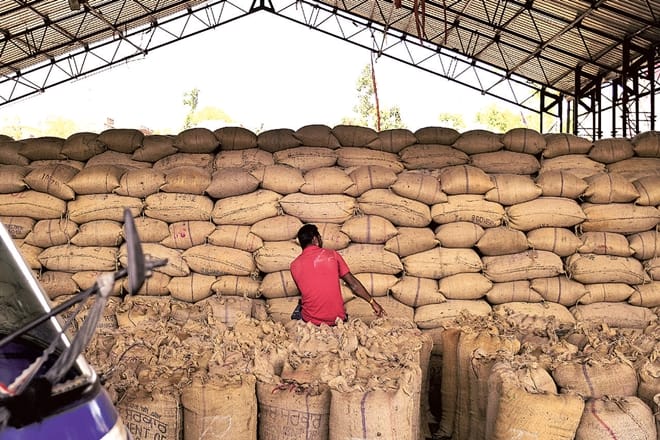 According to budget papers, government's gross subsidy bill has steadily risen in the last three years.

More than five years into the passage of the historic National Food Security Act (NFSA), 2013, the government is still grappling with the mammoth task of supplying highly subsidised foodgrains to the 81 crore people under the public distribution system (PDS). The NFSA, which replaced the Targeted Public Distribution System (TPDS), expanded the coverage of beneficiaries significantly, and beneficiaries are entitled to subsidised foodgrains (5 kg per head per month). Post the NFSA period, the above poverty line (APL) and below poverty line (BPL) categories under the TPDS have been done away with.

The NFSA, with an objective to provide for food and nutritional security by ensuring access to adequate quantity of quality food at affordable prices to people to live a life with dignity, has gradually turned out to be a huge financial burden on the central government. The mounting burden of food subsidy budget is compounded by the huge surplus grain (rice and wheat) stocks currently held by the Food Corporation of India (FCI), and it has put enormous pressure on the central government’s finances (see table).

The rising food subsidy is mostly attributed to two factors. Firstly, it’s because of open-ended procurement operations carried out by the FCI and state government agencies for purchasing paddy and wheat from farmers by paying minimum support prices (MSP), especially in the states of Punjab, Haryana, Rajasthan, Madhya Pradesh, Chhattisgarh, Odisha, Telangana and Andhra Pradesh. The broad objective is to ensure MSP to farmers and availability of foodgrains to the weaker section of the population at subsidised prices under the NFSA. This results in excess procurement of foodgrains against the requirement for the implementation of the NFSA. For instance, the FCI and state agencies procured 69 million tonnes (MT) of foodgrains (30.81 MT of wheat and 38.18 MT of rice) in both rabi and kharif seasons (2017-18). However, the offtake of foodgrains by states (for the NFSA) during 2017-18 was around 54 MT, and grain offtake for other welfare schemes had been around 3.6 MT during 2017-18. In addition to carry-forward stock from the previous year, it has led to ‘surplus’ grains held with the FCI, which pushes up the cost of storing foodgrains.

Currently, the FCI has much more grain stocks than the required buffer norms (see table). Over the years, the economic cost (procurement, distribution and storage) of holding foodgrains (see table) has been rising sharply, contributing to the rising food subsidy budget. The FCI has managed to sell around 4 MT of wheat under its Open Market Sale Scheme in the current fiscal.

The second factor contributing to the rise in food subsidy bill is the Centre’s reluctance to increase the price of highly subsidised foodgrains supplied under the NFSA, 2013. Under the food Act, the price of Rs 3/2/1 for rice, wheat and coarse grains, respectively, was capped for three year, which ended in 2016. Each rupee (per kg) increase issue price of grains could result in savings of food subsidy of more than Rs 5,000 crore annually.

Along with the ballooning food subsidy budget, there is fiscal juggling taking place as far as the FCI’s finance goes. With the rising outstanding food subsidy dues (because of the mismatch between the budget allocated to the corporation and the actual expenses incurred) to the FCI, the finance ministry would soon arrange a loan of Rs 27,000 crore from the National Small Savings Fund (NSSF).

In 2016-17, the finance ministry had arranged a five-year loan from the NSSF of Rs 70,000 crore for the FCI, for bridging the gap between the subsidy amounts released to the FCI and its actual operational expenses of storing and transporting huge amounts of foodgrains.

All these measures push up the food subsidy budget further.

For better management of foodgrains, the NDA government, in August 2014, set up a high-level committee (HLC) chaired by Shanta Kumar. The HLC, in its recommendations (January 2015), had urged the government to have a relook at the current NFSA coverage of 67% of the population. Stating that the current NFSA coverage is on the ‘higher side’, it should be brought down to around 40% of the population, which would comfortably cover BPL families and some even above that.

The HLC also recommended gradual introduction of cash transfers (DBT) in PDS, starting with large cities with more than 10 lakh population, and subsequently extending it to grain surplus states. The move is estimated to save Rs 30,000 crore annually. A pilot DBT in PDS was launched in Chandigarh, Puducherry and the urban areas of Dadra and Nagar Haveli in 2015. Another pilot was launched in the Nagri block of Jharkhand in October 2017. Not much progress has been witnessed in expanding DBT in PDS. Puducherry chief minister V Narayanasamy has communicated to food minister Ram Vilas Paswan to withdraw from the DBT pilot.

Because of the government’s thrust on digitisation and Aadhaar seeding of ration cards, during 2013-17, as many as 2.75 crore ration cards were weeded out as part of the government’s effort to identify the beneficiaries under the NFSA. Although there have been annual savings of Rs 14,000 crore because of elimination of ghost ration cards, food ministry officials said that new beneficiaries are added into the entitlement list. Over 3,37,000 of India’s 5,34,000 ration shops now have e-PoS machines that are used to check the identity of ration card owners—and that’s 63.2% of the total as compared to a mere 5,835 shops when the NDA government came to power in May 2014. Over 18.71 crore ration cards, or 85% of the total, have been seeded with Aadhaar—this was just around 2% in May 2014.

With a huge spike in food subsidy budget—which has reached unsustainable levels—the Centre has to take some drastic measures such as capping procurement for maintaining optimum foodgrain stocks, increasing issue price of foodgrains, rolling out DBT in cities, and curbing grain pilferage through digitisation of the entire foodgrain management. With elections to the Lok Sabha slated in May 2019, the onus will be on the new government to take some tough steps to keep the food subsidy budget under control.

(The author is a senior consultant with ICRIER. Views are personal)

Follow us on
Latest News
Recession-proofing tech teams with the top trends of 2023
How to manage your money to keep goals on track and crises at bay
DRI seizes 833 kg gold worth Rs 405 cr in FY22, bulk originating from Myanmar
Dow 30 jumps 20% from September lows leaving Nasdaq 100 and S&P 500 behind
MCD elections 2022: How a BJP loss could alter Delhi’s power dynamics
Discoms’ aggregate technical and commercial losses down to 17pc in FY22
Global biopharma cos report over 9% Quarter-on-Quarter decline in market capitalisation during Q3: GlobalData
Photos
‘The festival of democracy’ – Modi votes in Gujarat 2nd phase! See PHOTOS
5 hours agoDecember 5, 2022
Gujarat Assembly Election 2022: The Festival of Democracy – In PICS
4 days agoDecember 1, 2022
Mumbai Attack 26/11: Tributes paid to martyrs on 14th anniversary of terror attacks that shook the nation
1 week agoNovember 26, 2022
Read More
×
How to get fired
Let the WTO referee carbon border taxes
Right path on reforms
Data Drive: Boost education capex
Across the aisle by P Chidambaram: Hard talk, hard times
Inside track by Coomi Kapoor