The thrust of urban solid waste management should be household level segergation. Lobbies are pushing unsustainable alternatives instead. The Ministry of Housing and Urban Affairs should stop financing compactors under the Smart Cities Mission 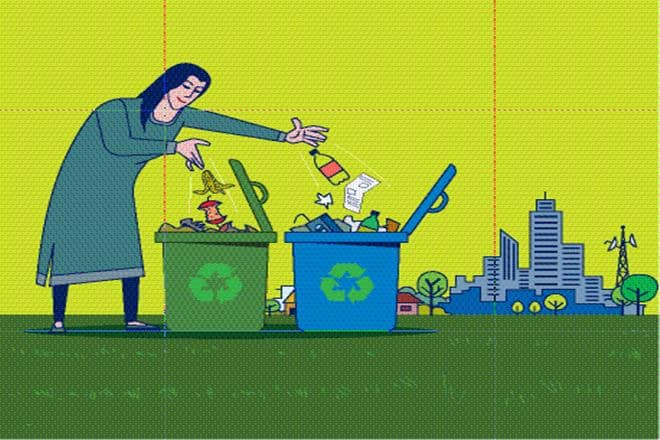 The savings from eliminating costly secondary transport can easily fund the construction and operation of decentralised centres for the processing of wet and dry waste (Illustration: shyam kumar prasad)

The first rule of waste management all over the world is that households must segregate their waste before it is collected from the doorstep. The Solid Waste Management Rules 2016 prescribe the same. If we do not mix wet waste with dry waste, the burden of solid waste management on our municipalities reduces significantly. The wet waste can be composted locally; the dry recyclable waste can go for recycling and what remains can be safely disposed. Our cities will then be really cleaned up, as opposed to just looking clean.

Some municipal authorities and some civic-minded individuals (mostly women) are working on inculcating among city dwellers the habit of not mixing different kinds of waste. But there is a disturbing pushback to this campaign from three forces that are implicitly misguiding people that there are “smart” ways of handling mixed waste, which make segregation unnecessary.

Also Read
Understanding the four Vs of operations management – volume, variety, variation and visibility
Still a net negative for people’s privacy
Why management is both art and science
Cop out at COP27

First, the good news! Tamil Nadu has achieved 100% segregation in 20 of its 50 smaller municipalities, and 80-90% in the rest. However, the capital city of Chennai is lagging, segregating only 50% of its waste. Waste collection is organised daily for wet waste and once a week for dry waste. This is important because the unmixed transportation and processing of wet and dry waste encourages citizens to keep their waste unmixed too. Wet waste, more than half the total waste, is used for composting or biomethanation in a decentralised manner. It reduces, at one stroke, the need for long-distance transportation of waste by half.

In Bengaluru, citizens have taken up the cause themselves. Dr Shanthi Tummala and her team of waste warriors have achieved about 90% segregation in the HSR Layout ward, which has 30,000 households. They have an awareness-building programme and also a strict penalty of `500 when mixed waste is handed out. The ward now houses India’s first compost learning centre where different models of home and lane composting are showcased, and residents can come for training. The Purva Venezia apartment complex with about 1,300 households has been segregating their waste 100% for the last seven years and produces compost of excellent quality that is used by farmers to improve yields.

There are fledgling efforts even in South Delhi to persuade people to keep their wastes unmixed. Bhavreen Kandhari, a homemaker and an environmental activist, together with a few like-minded residents of Defence Colony, is hard at work, building awareness for keeping wet waste separate. Kandhari and the others are working with South Delhi Municipal Corporation (SDMC) to ease access to bio-composters in the colony. Charu Gupta, a homemaker and Priti Wadhwa, a chartered accountant, of Greater Kailash I, have got together to persuade colony residents and those of areas around the colony to segregate their waste. They have tied up with Pick My Trash, a joint initiative of the NGO Chintan and Safai Sena (a registered group of waste collectors) for recyclables to be picked up from the locality and transported to a Material Recovery Facility at regular intervals. More households are coming forth, slowly but surely, to segregate their waste at source and participate in this effort. It is heartening to see homemakers becoming community makers. SDMC has decided to experiment. In Punjabi Bagh, they have set up a composting plant (1 TPD) and a biomethanation plant (5 TPD), which would require segregating waste.

Now, about the pushback. It comes, first of all, from interests backing some seemingly superior technology that is actually retrograde. Earlier, in these columns, we talked of the perils of waste to energy plants which rely on the incineration of mixed waste. Such plants in India have been either non-starters or highly polluting failures. Even so, several cities are actively promoting incineration of mixed waste. Each state would be well advised to set up a high-level technical committee, with environmental experts, to lay down a policy on this issue.

Two additional factors which push the system away from segregating wastes have to do with waste management practices. The practice of entering into waste transport contracts with private parties in which payment for waste transportation is made on a tonnage basis, provides an incentive to maximise the weight of waste any which way.

They add wet waste, at times malba, and also get their doorstep waste collection staff to mix whatever is given to them separately.

The rapidly growing use of compactors is the other villain. Compactors are expensive machines that squeeze and compress the volume of waste. Whether installed at the dhalao or in the mobile truck, they enable more waste to be carried per trip and, thus, reduce transportation costs. Kolkata Municipal Corporation was the first in 2012 to use compactors at dhalaos. A national daily put this as: “The city took a step ahead towards becoming a vat-free metropolis”. Vat, in this context, is not a tax but a dustbin in a public space. The central message was that garbage was now going to be out of sight, and there will be no stench and vector-borne diseases in the vicinity.

There has been a rapid increase in the purchase of compactors in many cities, including Delhi. Lucknow has purchased 20 compactors, and Ludhiana is proposing to purchase 39 compactors with funds from the Smart Cities Mission.

Compactors are the antithesis of segregation. The compacted waste is unfit for any resource recovery or safe disposal. Use of compactors on mixed waste makes it almost impossible to extract the recyclable dry waste such as plastics, metal, paper and cardboard from the mixture. The compression of wet waste in the mixture releases leachate (a black foul-smelling liquid) that is difficult to dispose. Leachate percolates into the soil and contaminates groundwater. When it drains off into the sewer system, it overloads the sewage treatment plants.

After the compacted waste is transported and dumped, the lack of aeration at the site results in the decomposing wet waste generating methane, a potent greenhouse gas that causes global warming. As waste pickers routinely light fires at landfill sites to extract scrap metal, the presence of methane gas stokes the fire further, and the presence of PVC plastic in the compacted waste means that the burning of plastics would release carcinogenic dioxins and furans.

A much smarter alternative for municipalities under Smart Cities Mission would be to promote decentralised composting of wet waste, tie-up with local kabadiwalas or NGOs for recyclable dry waste, and work on safe disposal of the rest. The savings from eliminating costly secondary transport can easily fund the construction and operation of decentralised centres for the processing of wet and dry waste. Compactor-based waste management is vendor-driven and should be discouraged. The Ministry of Housing and Urban Affairs should either stop financing compactors under the Mission or at least offer municipalities similar levels of support for more sustainable methods of waste management.

There was a similar pushback on alternatives to landfilling when Municipal Solid Waste Rules 2000 were notified. Almitra Patel, a member of the Supreme Court Committee which provided the basis for those Rules, recalls a lecture tour by a manager of New York’s largest landfill at the time to promote landfilling in India. Today, New York plans near-zero waste to landfill by 2030, which is in line with our Rules 2000. The difference is that they are working towards it, while we are far from enforcing the Rules.

Ahluwalia is chairperson, ICRIER, Delhi, and former chairperson of the High-Powered Expert Committee on Urban Infrastructure and Services. Khare is a research assistant at ICRIER