Blame state apathy for the rise in encephalitis toll this year. 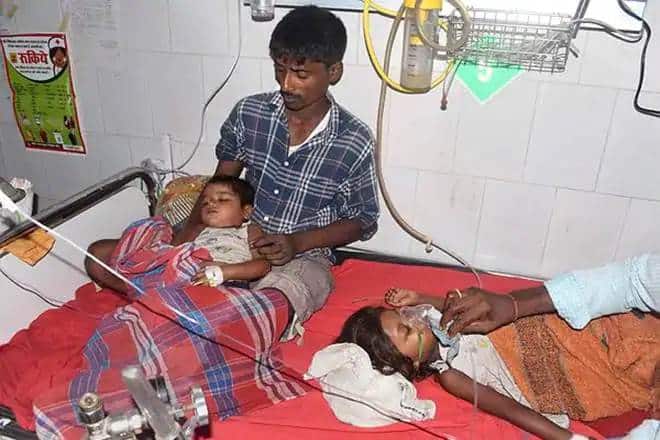 The confusion over what has killed over 100 children in Bihar is a symptom of the gangrenous rot in public healthcare in India. While even doctors are casually bandying about the term Acute Encephalitis Syndrome (AES) to talk about the disease that has repeatedly struck one of the poorest regions in the country, the fact is untrained health workers may use the term AES to talk about an undiagnosed brain disease which manifests symptoms like convulsions, loss of consciousness, etc. But when doctors use the phrase after a 100 deaths, it is a worrying sign—the doctors themselves are not sure of what they are dealing with. No wonder many explanations are being forwarded to explain the current crisis. While experts agree that a host of diseases and ingestion of certain toxins exhibit the symptoms seen in the current outbreak in Bihar, the fact that over 300 children have been hospitalised should have immediately pointed at lines of investigation to ascertain cause. Instead, there is now confusion, with senior doctors at one of the major treatment hospitals in Bihar calling it a case of heat-wave related morbidity while a set of researchers who studied past outbreaks in the region believe it to be litchi-toxicity related critical hypoglycemia. Overextended public healthcare infrastructure—it is only on Tuesday that the state government announced that something as basic as bed capacity was being added—has been made worse by the local and state administration sleeping over both prevention and containment.

The Bihar health minister asking about cricket scores at a press conference where the Union health minister was present is a telling sign of official apathy. While the Centre had announced a 100-bed superspeciality hospital in the district in 2014, after 379 children died in a similar outbreak, the facility is yet to be completed. A 10-bed facility exclusively for children, also announced in 2014, is yet to see the light of day. A chronic deficit of basic healthcare infrastructure and human resource in Bihar—it has the worst doctor-patient ratio in the country and one of the largest radial distance covered by a primary healthcare centre—is likely to have made the problem worse, with patients in far-flung areas of the epicentre district, Muzaffarpur (a major litchi cultivation centre), and adjoining ones unable to access care. Local activists have claimed that neither the state government nor the Centre have carried out any awareness drive in Muzaffarpur and districts bordering it. While the Bihar government laid down a standard operating procedure (SOP) in 2015 that mandates grassroots health workers checking with households if any child has shown symptoms of AES, the fact that mortality climbed rapidly this year after having fallen to 33 in 2018, from over 400 in 2012, indicates that there were lapses in implementation of the SOP. Besides, litchi-related hypoglycemic encephalitis being suspected is an indicator of lingering protein-energy malnutrition in children in the area as well.

Uttar Pradesh, after 500 children died in the 2017 outbreak of Japanese encephalitis (JE), launched a vaccination drive against JE, and intensive health awareness and sanitation coverage (JE is spread by mosquitoes)—in 2018, cases dropped to a third of that reported in 2017. If Bihar has failed to learn from UP’s example, then the blame for this year’s toll rests squarely on the state government.