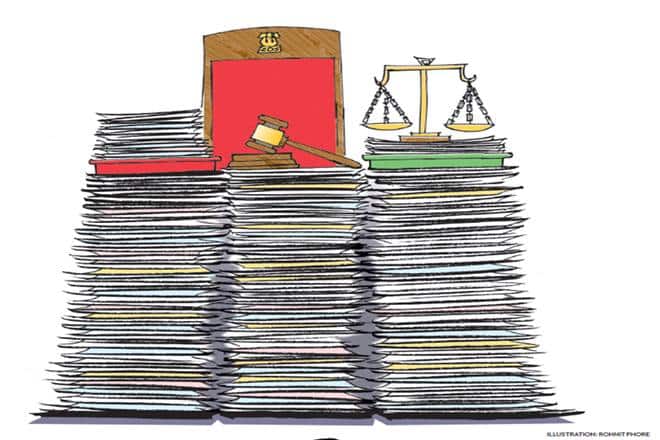 The performance of any organisation where perpetual delays in meeting consumer needs do not result in termination of service means performance falls.

Recently, Ranjan Gogoi, the Chief Justice of India, made three requests to the Prime Minister to help clear the backlog of cases: Expand the Supreme Court (SC) Bench; raise the retirement age of high court judges from 62 to 65 years; and making tenure appointments of high court and SC judges under the relevant constitutional provisions to clear the backlog. The CJI needs to be commended for making these suggestions public.

The Law Commission has expressed a concern that increasing the number of judges without adequate infrastructure may not reduce delay.

India’s judicial system is crying for reforms. First is some food for thought, and then ideas. Any move by people or the Executive to question the SC, hold it accountable or affect change is resisted, under the garb that independence of judiciary is under attack. Arghya Sengupta of Vidhi Centre for Legal Policy wrote in the Economies Times that “Parliament is not only constitutionally empowered but is also responsive to the needs of the public.”

According to a Mint editorial, “Barring exceptions, unless unwarranted expectations of non-judicial staff are fulfilled, they tend to aggravate the woes of justice-seekers by delaying the registration of cases, misplacing case records, and avoiding timely issuance of court notices/orders.” Conversely, “One finds groups of lawyers forcing strikes for days, weeks or months even at high courts against reformative steps being attempted by well-meaning judges.”

A bigger problem is that the “Indian court administration has not adequately engaged the right professional talent necessary to improve court functioning through technology solutions. Instead, most court automation committees usually comprise judges, lawyers and registrars.” (NIPFP working paper: How to Modernise the Working of Courts and Tribunals in India.)

The performance of any organisation where perpetual delays in meeting consumer needs do not result in termination of service means performance falls. From 1950 to November 2015, only six women became SC judges, of a total 229 judges appointed. According to an April 2019 article in Livelaw.in, “Currently, there are 17 women senior counsel designates in the Supreme Court as opposed to 403 men.” Is there a gender bias in the legal profession and judiciary, as judge Indu Malhotra recently said.

In 2018, the SC was closed for five working days each during Holi, Dussehra and Diwali, and 11 working days during Christmas and New Year. Summer break, a legacy of the British Raj, was from May 20 to July 1. Are such schoolchildren-like holidays warranted in the 21st century?

Did the founding fathers of the Constitution visualise the SC running a cooperative society, i.e. BCCI, devote time to liquor ban, dance bars, use of pellet guns, Rohingyas, selection process of the national kabaddi team, dahi handi, etc. Not to forget the frivolous PILs like banning of sardar jokes.

To be fair, judges have to deal with activist lawyers. According to a Times of India article, if CJI’s orders to their PILs, good and tainted, are favourable, he is crowned independent; if not, is berated.

A petition was filed to ban sale of crackers in the NCR. For reasons unknown, the ban was extended nationwide. Under Article 142, SC orders have to be implemented, yet the order was violated, especially in Delhi. Recently, two Kerala temples got SC’s okay to burn crackers. Does such centralisation of matters not undermine lower courts and take up valuable court time?

Is it appropriate for the judiciary to sit in judgment on cases involving disproportionate assets of politicians when it is not mandatory for its judges to make a public declaration of assets? Can the SC ask the government to be transparent in its appointments of, say, the Chief Information Commissioner when it refuses to be transparent itself by making records of its collegium meetings public?

The manner in which promoters of a steel company have used courts to prevent losing control under the Insolvency and Bankruptcy Code have made a mockery of IBC and the judicial system.

There is a perception that on matters that might adversely affect the Muslims, the SC takes time! For example, in December 2018, the SC ordered status quo on a November 2017 Allahabad HC order directing removal of a mosque in court premises.

Now, the ideas to improve court working
Courts need administrative functioning to be streamlined. The paper ‘How to Modernise the Working of Courts and Tribunals in India’ has ideas. Excerpts:

Administration involves, “To ensure that processes are followed, documents are submitted and stored, facilities are maintained, and human resources are managed.”

Two, “This agency should also be given the task of re-engineering court processes to achieve greater efficiencies. A key element in the process re-engineering will be the use of information technology.”

Three, set up an “Indian Courts and Tribunals Services (ICTS), an entity that provides high quality administrative support services to a court or tribunal.”

Some more suggestions.
One, can the SC and government work together to suggest reforms to our civil and criminal laws, having twin objectives of making them simpler and towards time-bound adjudication?

Two, courts should focus on interpreting law and administering justice. The SC must publish guidelines on who can file PIL and under what circumstances. No organisation that has received foreign funding should be permitted to file PIL.

Three, the SC holiday calendar needs reworking by which courts work through the year. Judges, like government servants, must have gazetted holidays and entitled to, say, 30 days of annual leave.

Four, the government must increase the financial value of cases, i.e. the basis on which jurisdiction of courts is decided. This shall reduce workload.

Five, make it mandatory for all SC and high court judges to periodically share their Statement of Assets on respective court sites.

Six, appealing cases up to the highest court on one pretext or the other is often used to prolong the case. Can appeals be restricted to, say, two higher levels and all courts follow CJI Gogoi’s No Adjournment Plan?

Seven, can the collegium give a roadmap on increasing the number of women judges to, say, 20% in SC and all high courts. Also, ensure promotions are gender-neutral, be champions of gender diversity, and foster an inclusive and respectful culture.

Eight, on Article 142, KK Venugopal wrote in The Hindu, “I would therefore propose that all cases invoking Article 142 should be referred to a Constitution Bench of at least five judges so that this exercise of discretion may be the outcome of five independent judicial minds operating on matters having such far-reaching impact on the lives of people.”

Courts must remember what former President Pranab Mukherjee told the fourth retreat of SC judges in April 2016. “Each organ of our democracy must function within its own sphere and must not take over what is assigned to others. The balance of power between the three organs of the state is enshrined in our Constitution. The exercise of powers by the executive and legislature is subject to judicial review. However, the only check possible in the exercise of powers by the judiciary is self-imposed discipline and self-restraint by the judiciary.”

The author is a chartered accountant and founder of http://www.eSamskriti.com

(The intent behind this article is to provoke thought and not cast aspersions on the judiciary. Errors, if any, while presenting facts, are inadvertent and without mala fide intent.)