The inherent ‘consumer-bias’ in these policies makes trading environment unstable and unpredictable. 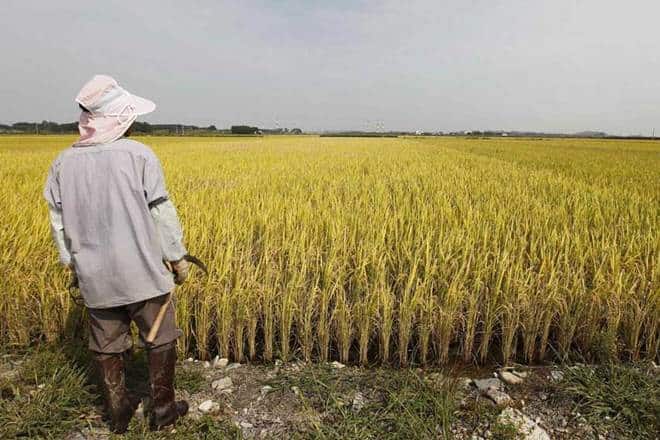 In the drive to double farmers’ incomes by 2022, the agriculture minister recently tweeted, with a picture of the prime minister Narendra Modi and himself, about their resolve to grow Indian agricultural exports to $100 billion by 2022-23. (Reuters)

In the drive to double farmers’ incomes by 2022, the agriculture minister recently tweeted, with a picture of the prime minister Narendra Modi and himself, about their resolve to grow Indian agricultural exports to $100 billion by 2022-23. A similar target was echoed in the Dalwai Committee Report on doubling farmers’ income, wherein it says “aim should be to raise agricultural export by minimum of three time by 2022-23, to reach target of $100 billion of exports”. Interestingly, the draft Agricultural Export Policy, that is put in public domain by the minister of commerce, puts the target of agri-exports of only $60 billion by 2022-23, which is much modest than what the agriculture ministry has been aiming at.

But when two important government ministries—agriculture and commerce—talk of different goals for agri-exports, one at $100 billion and the other at $60 billion, one wonders whom to believe, and who is actually responsible to achieve this target? Incidentally, it also reflects a disconnect within the government and puts the inter-ministerial functioning in poor light. In any case, it is worth noting that during the UPA period, Indian agri-exports grew five times—from $8.7 billion in 2004-05 to $42.6 billion by 2013-14. This was an unprecedented achievement in independent India’s history. Not only this, India’s net agri-export surplus (exports minus imports) also increased from $3.7 billion (2004-05) to about $27 billion (2013-14)—that was more than a seven-fold increase.

The draft Agri-Exports Policy rightly identifies first two steps— identify commodities where India has a global comparative advantage, and develop clusters in states to create global value chains for those. Research done at ICRIER can offer support on the first step. Eleven commodities—marine products, rice, meat, spices, cotton, fresh fruits and vegetables, sugar, coffee, groundnut, oilmeals and cashews—comprise more than 80% of agri-export basket in FY17. Our study of 10 years of data of 70% of Indian agricultural output (20 commodities), shows that most Indian crops were globally price-competitive in most years. However, since 2013-14, many of these commodities suffered competitiveness loss due to falling global prices. But it is not just price competitiveness that restricts our exports, the biggest hurdle comes from the uncertain domestic marketing and trade policies.

The inherent ‘consumer-bias’ in these policies makes trading environment unstable and unpredictable. Any rise in domestic prices almost immediately implies imposition of market restrictions—global exports are restricted using minimum export prices, bans, etc, and private participation is controlled with ECA. This harms India’s image of a reliable global supplier of agri-products and it can never get the best price for its exports. Thus, this consumer-bias in policy must be redressed and equanimity between needs of food-insecure consumers and income-insecure farmers should be developed. So, the first change that is needed is in the mindset. Instead of suppressing market prices for farmers to support consumers, government should protect consumers through a targeted unconditional income transfer. Restricting markets and compensating farmers through higher MSPs based on new formula (cost A2+FL+50%) will be an inflationary and unsustainable solution to Indian farmers’ woes. It is likely to hit agri-exports adversely, especially of rice and cotton, as they will become non-competitive.

Second, policymakers should support agri-exports, while ensuring environmental sustainability of agriculture. While marine products, meat, oilmeals, groundnuts, cotton, spices, fruits and vegetables do not pose such threats, exports of rice must be properly assessed. One kg of rice in Punjab or Haryana needs about 5,000 litres of irrigation water. This is drawn from underground and has led to drastic fall in groundwater table by 70 to 110 cms/year. Exporting large quantities of common rice from this region is akin to exporting billions of cubic metres of water. Best way to correct this would be to gradually phase-out power and irrigation subsidies, and replace them with a direct income support to farmers, while letting the price of power and water reflect its true value.

Third, develop efficient global value-chains, liberalise land lease markets across all states and encourage contract farming on medium- to long-term basis. Exporters and processors must be encouraged to buy directly from farmer producer organisations (FPOs) bypassing the inefficient APMCs. Major investments are needed at back-end to create infrastructure for global and domestic value-chains, ranging from produce aggregation to its sorting and grading, packaging, storing and linking the hinterlands to ports for export markets. This can be done by the private sector if institutional reforms precede it. These investments will set-off a multiplier growing off-farm sector jobs in rural areas.

Most of these reforms come under the jurisdiction of state governments. With the BJP-rule in 20 states, this is the Modi-moment to reform agri-markets in one go. If the government can usher in these changes, agri-exports can certainly rise and so would the farmers’ incomes. But whether they touch $60 billion or $100 billion by 2022-23 depends upon how wide-ranging these reforms are, and how efficient their implementation is. So far, the records are not very promising where the ground reforms don’t match the pitch of slogans. Only time will show whether Indian agri-exports would touch $60 billion or $100 billion by 2022-23.