Demonetisation was necessary to deal with the country’s ‘conflict trap’ 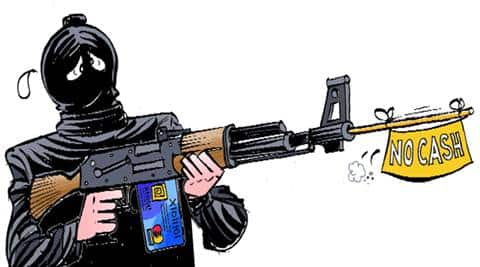 Data from South Asia Terrorism Portal states that over 700 terror-related deaths have occurred in India each year since 2014.

Demonetisation is a harsh measure that is expected to work as a double-edged sword, to primarily kill two among the several demons plaguing the Indian economy. On the one hand, demonetisation is an attempt to bring substantial amount of black money into the economy with crackdown on corruption; and on the other, to disrupt the funding of terrorist activities which have been surviving on counterfeit currency.

Since a lot is being written about the first aspect, we consciously begin with the second and address the importance of mitigating conflicts and promoting peace. Data from South Asia Terrorism Portal states that over 700 terror-related deaths (including civilians, security personnel and terrorists) have occurred in India each year since 2014, of which a large component is on account of either left-wing extremism or terrorism in Jammu and Kashmir. Until November 2016, 789 fatalities had taken place due to conflicts, of which 230 were in J&K, and 386 because of Left-wing extremism. Of the 230 deaths in J&K, 11 were civilians, 73 security personnel, and 146 terrorists. Children missing schools, businesses remaining closed, and governments allocating resources to less productive services such as defence, impedes both the present and future growth potential of the region. Rightly, Collier in his 2007 book titled ‘The Bottom Billion’ cited ‘conflict trap’ as one of the four development traps, besides natural resource trap, being landlocked with bad neighbours, and bad governance. Conflicts have large economic costs, and the longer a country stays in a state of conflict, the more these costs are. In 2007, cessation of violence was expected to generate a “peace dividend” approximating 13% of the 2007 gross world product! The dynamic component of the peace dividend comes from the total additional economic output likely to occur due to the liberation of human, social and physical capital, which was suppressed by violence. Static peace dividend, on the other hand, accrues from the economic activity that would be transferred from violence-related industries to peace-related industries.

Also Read
Inside track by Coomi Kapoor
Understanding the four Vs of operations management – volume, variety, variation and visibility
A shocking ten days for the UK

So, the question that arises is how can demonetisation bring peace? Two motivating factors that in general make youth join anti-state organisations are greed and grievance. With legal tender notes becoming worthless overnight, the power of anti-state elements to lure youth by satisfying their greed is expected to get adversely impacted. Also, to the extent stability and peace promotes employment and growth in erstwhile conflict affected areas, the grievance factor that pushes the youth into terrorism gets impacted. As per World Bank’s Report on Addressing Inequality in South Asia (2015), in India, the probability of a district being affected by Naxalites (Maoist rebels) has been linked with its poverty incidence. Deprivation and higher poverty intensifies the grievances felt by certain groups. It also reduces the opportunity costs of initiating and joining a violent conflict. Further, according to the Financial Action Task Force (FATF), counterfeit notes are the primary source of terrorist financing in India. Terrorist groups such as Lashkar-e-Taiba (LeT), Harkat-ul-Jihad al-Islami (HuJI), etc, pump counterfeit currency in India through various channels and international routes and make decent profit out of it. Terror attacks have a counterfeit trading link as well. The decision of demonetisation will be enough to cripple the terror activities of such groups, which earlier used to thrive on the fake Indian currency. Undoubtedly, this shall be a major win for the nation.
Moving over to the economic aspect of demonetisation, while certain segments have applauded the scheme, the measure has also raised apprehensions and concerns in equal measure.

The shadow economy has flourished for years, negatively affecting government revenues. The government’s white paper on black money highlights various attempts at quantifying the extent of black money prevalent in India. The National Institute of Public Finance and Policy (NIPFP) conducted a study for the period 1975-1983 to estimate black economy. According to the study, the black economy was 15-18% of the GDP for the year 1975, 18-21% of the GDP for 1980-1981 and 19 to 21% of the GDP for 1985. The World Bank’s report on Shadow Economy (2010), estimated the Indian shadow economy at over 25% of the GDP in the year 2006. In 2011, Central Board of Direct Taxes assigned three institutes—NCAER, NIFM and NIPFP—to provide an estimate of black money held by Indians. While the results of the report are not yet disclosed, it is rumoured that NIPFP speculated India’s black money to be up to 75% of the country’s GDP! While estimates vary, nevertheless it is clear that the magnitude is large. In terms of corruption perception index, as well, India ranks low despite an improvement in recent years. For instance, in 2015, it ranked 76 out of 168 countries, while in 2011, it ranked 95 out of 183 countries. Tackling corruption, therefore, becomes imperative and demonetisation is considered as the surgical strike on the same.

Few schemes adopted in the past to unearth black money have been raids and introducing amnesty and Voluntary Income Disclosure Schemes. However, it is to be appreciated that such steps have to be a part of ‘reform package’ that include measures such as improving institutional quality, rationalised government control on economic activities (such as tax structure and duties), easing businesses, digitalisation, political will, effective governance and trustworthy judiciary. While steps have been initiated, a lot more needs to be done.

To the extent that demonetisation will bring back the black money into the system, as also reduce corruption, not to mention introducing a behavioural change towards cashless transactions, it is a laudable scheme. On the fiscal front, the move is expected to raise revenues for the government substantially. Demonetisation, hand in hand, with GST will help in expanding the tax base and increasing efficiency and accountability in the taxation process. It is expected to increase the tax-to-GDP ratio in the long term, which stands abysmally low at 16.6% presently. Further, government will also earn revenues as ‘seigniorage’ by printing money of higher denomination, i.e, R2,000. Seigniorage is calculated as the notes in circulation less the cost of printing and distributing them, multiplied by the market interest rate. Printing higher denomination notes is cheaper than printing notes with lower denominations. While the printing cost of R1,000, R500 and R10 notes is at 0.317%, 0.5% and 9.6%, respectively of its face value, the printing cost of R2,000 notes will be much lower.

On the downside, the costs of liquidity crunch faced by the common man, especially rural households and businesses, small traders and retail outlets, especially without access to bank branches have been enormous. Land/property sales by, in general, law abiding middle class households have also felt the heat. Enormous opportunity costs are associated with public wasting time in long queues at banks. However, that is not to say that corrupt rich are less impacted. In fact, their pain shall continue much beyond the turbulence in the past few days, especially so if their unaccounted wealth is more in the form of cash, and less in property or bullion. Could the government have handled demonetisation alternatively remains debatable.

However, with demonetisation expected to hit the economy adversely in the next two quarters, the governments must initiate expansionary policies, especially through investment in infrastructure at the earliest. Given the expected revenue windfalls, this should not be difficult. Also, lessons need to be learnt on government’s revised role in a cashless economy.