Demonetisation: Here’s why note ban has led to long queues at the ATMs 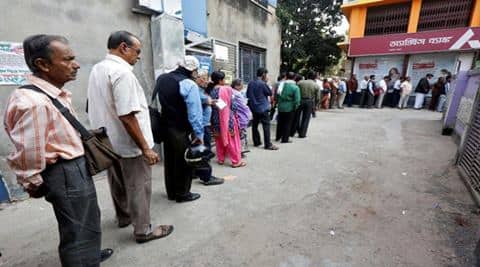 Are the queues there because money supply has fallen in the economy? It’s not that simple. Yes, cash in circulation has taken a hit, with the black and fake notes being weeded out. (Reuters)

Given the scale of demonetisation that the government has embarked on; this might seem like a very silly question. But then economists have a reputation of observing the obvious and then asking silly questions, so do indulge me!

Are the queues there because money supply has fallen in the economy? It’s not that simple. Yes, cash in circulation has taken a hit, with the black and fake notes being weeded out. But then, a record amount of cash has flown into bank accounts; pushing up the overall money supply in the system.

Which brings us to a paradox. On the one hand, long queues at ATM machines refuse to abate, and there is a virtual paralysis of informal markets. On the other hand, interest rates, or the cost of holding onto money in an economy; is falling down!

So ‘liquidity’ in all its economic definitional glory, is high. Yet the common man is complaining of unavailability of cash!

Here’s my pet theory. There’s a reason why the sharp demand for cash isn’t getting reflected in higher interest rates, as we are essentially talking of two very different markets. Interest rates are determined by the borrowing and lending that banks do among themselves, and subsequently with the government, firms and consumers. Among other things, they are dependent on supply of funds, i.e., bank deposits in the system; which is of course are at record highs.

On the other hand, the market that affects ATM queues—is the huge cash economy that is mostly informal or semi-formal, and is largely invisible in official statistics. This is essentially the market where farmers, grocers, maids, daily wage workers, and small shops operate. The conventional interest rate does not apply here (unless one is a moneylender), since most of the cash in this economy is meant for transactional purposes.

Till now we wouldn’t specifically care much about this dichotomy, since the cost of withdrawing cash and flirting between the cash and cashless markets was minimal. But demonetisation has created a wedge between the two. Why, one may ask? To liken it to the concept of the formal money market, imagine there is a make-believe economy that is populated by only two types of people—(a) patient ones, who stand at the ATMs on a particular day to get hold of cash; and (b) the impatient ones, who do not have the time to stand in queues on that day, but are willing to offer a premium to the patient ones for immediate access to their cash, which they will return the next day. The patient lender will obviously charge for the time spent at the queue.

So in this hypothetical set-up of ours, the unofficial ‘interest rate’ in the cash economy will be proportional to the length of the queue, or hardship faced at banks to withdraw cash.

We now have the contours of how the demand and supply curves of transactional cash might look like in the informal economy. In the accompanying graph, the demand curve of cash (DD_1) is shown downward sloping. This is because as ‘interest rate’, or time waiting in queue increases, people will tend to demand lesser cash. Similarly along the X-axis, as the size of the informal economy increases; people will demand more cash to deal with it. Similarly money supply curve (SS_1) is upward sloping—hypothetical lenders of this cash will obviously lend more at higher ‘interest rates’, and as the size of the market increases.

The intersection of the two curves at point ‘A’ determines the equilibrium interest rate (read queue length) and size of this economy. This is how it was the day before demonetisation.

Post demonetisation, people suddenly realised that the cash that they had stocked was no longer adequate to service their requirements the next day. The supply curve started to shift to the left in response to the shock (to SS_2). As expected, the ‘interest rate’ or value of cash rose and the size of the informal economy shrunk; as the economy reached point ‘B’, which coincides with the real life scenario of huge ATM queues and chaos in the informal economy.

But the government also announced a daily limit on cash withdrawals; as it started recalibrating ATMs. Now the supply curve started becoming steeper, almost resembling a vertical line (SS_3). It becomes steep because it no longer matters how much ‘interest’ or hardship people are willing to bear for getting cash—only R2,500 per account holder is available for spending in the market place. In economic jargon, the supply becomes highly interest ‘inelastic’. Queues get longer, and the informal economy gets further squeezed now at point C.

Meanwhile the demand curve starts to shift! After all, the average citizen is not sitting in front of a giant computer screen tracking overall demand and supply. She will observe the huge queues and panic. She might actually be spending less; but now wants to hoard all the cash.

It is little wonder that Arundhati Bhattacharya, chairman, SBI had recently exclaimed, “I have been requesting people that for heaven’s sake, spend!”

All these external factors will cause the demand curve for money to yank up to DD_3, leading to the new equilibrium point, ‘D’. The length of the queue gets even longer. ATMs will be running dry, thanks to the reduced supply of notes and the inflated demand.

So in the process of demonetisation—from points A to D—the length of the ATM queue has spiked up sharply; while the GDP of the informal economy has come crashing down.

The government could have better assessed the size of this informal, cash-based economy, and its demand for transactional cash; and tried to manage the cash supply curve beforehand to cushion the shock.

Or it could have first tried to flatten the demand curve. A flat demand curve for cash in our model would mean that it doesn’t get affected much by the availability of cash, or queues at ATMs. For instance, had most citizens been regularly using mobile money; they couldn’t have cared less for the cash availability at ATMs. The government could have spent the last few months aggressively running public campaigns promoting cashless transactions; just like it had done for Jan-Dhan Yojana. On a flat demand curve for cash; a sharp retraction in the supply curve would have caused minimal rise in ATM queues.

Unfortunately these steps are being considered now. Per se, demonetisation is a great step. Most economies dealing with their shadow economy have done so by attacking cash transactions. But the juggernaut in India suddenly changed course without warning, and possibly adequate planning. And for all its intended and unintended benefits, it is very important that the people on the ground pulling it do not get crushed by its new course.