Demonetisation: Here’s what can relieve rural India of cash-kill pains, put it on fast road to digital payments

Former prime minister Manmohan Singh went even to the extent of dubbing it as “monumental mismanagement” and “organised loot and plunder”, which may cost the economy 2 percentage points of GDP growth. 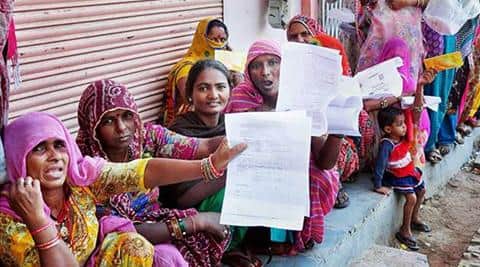 Former prime minister Manmohan Singh went even to the extent of dubbing it as “monumental mismanagement” and “organised loot and plunder”, which may cost the economy 2 percentage points of GDP growth. (Source: PTI)

Demonetisation has evoked sharp and extreme reactions from various quarters. At one end, we have nationwide surveys of C-Voter and the PM’s App, showing 88-90% people supporting it, and at the other we have strong protests in and outside Parliament by several Opposition parties. Former prime minister Manmohan Singh went even to the extent of dubbing it as “monumental mismanagement” and “organised loot and plunder”, which may cost the economy 2 percentage points of GDP growth.
One may differ from both these extremes, but almost all agree that in the immediate run, the unorganised sector has been hit hard as it runs largely on cash. And within the unorganised sector, farmers are suffering as they do not have enough cash to purchase required inputs for sowing of rabi crops.

The rabi area, as on November 25, was about 7% lower than the average of last five years, and fertiliser consumption during November 1-28 is about 12% lower than the average of last three years. Comparison with last year is not appropriate as it was a severe drought year. Although sowing is still on and it may soon catch up to the normal levels, yet it is true that the cash crunch is causing quite a bit of inconvenience and hardship to farmers. The government needs to act on a war footing to increase liquidity and promote e-payments in rural areas. How best can this be done?

It may help to know that of the total outstanding agri-credit in September 2016, almost 76% came from commercial banks, and the remaining from cooperative banks and regional rural banks, almost in equal proportion. Further, there are cumulatively almost 13 crore Kisan Credit Cards (KCC) issued by various banking agencies, of which about 7.5 crore are active.

Also Read
Pakistan: Chaos at the cross roads and what it means for India?
Given its track record, India has the moral heft to bring the developed countries to the negotiating table
Don’t sideline side letters
Inside track by Coomi Kapoor: Deadline postponed?

What this implies is that there is a good chance to upgrade much of the agri-credit to electronic platform quickly. But given that the density of bank branches and even ATMs in rural areas is less than one-fourth of that in urban areas, opening new bank branches or fixing new ATMs in rural areas will not only take time, but is also not economically viable for banks. However, providing custom-made point-of-sale (PoS) machines with business correspondent/agri-entrepreneur model is much cheaper (less than one-tenth the cost of ATM) and can be quickly ramped up in rural areas. These machines can sync farmers’ accounts with their Aadhaar numbers and also use credit/debit cards to conduct financial transactions, including cash withdrawal. Further, PoS machines can help create new jobs and augment incomes in rural areas. With this win-win situation waiting, what is needed is a massive and quick infusion of these PoS machines in rural areas. The government should invite all corporate bodies, especially those having a stake in agriculture and rural finance, to use their corporate social responsibility (CSR) funds to supply PoS machines and train PoS-owners. This would convert the current crisis into an opportunity to narrow the rural-urban digital divide.

Further, in all APMC mandis, the government should make it mandatory that all transactions, above a certain amount—say, R20,000—will take place only through electronic transfers. Payment for MSP of wheat and paddy in MP, Chhatisgarh, Odisha and UP, etc, is already being made to farmers’ bank accounts. But Punjab and Haryana, who route these payments through arhatiyas, also need to pay directly to farmers’ accounts.

NABARD, in association with cooperatives and RRBs, needs to take lead in organising nationwide training/ demonstration camps for farmers familiarising them with digital banking. Using PoS machines and converting all KCCs into chip-based plastic cards needs high priority. Wherever connectivity is a problem due to poor power supply, NABARD has been supporting solar-based V-sat through its Financial Inclusion Fund. We believe all this can be ramped up in a short period and change the very culture of transacting business in rural areas.

This move towards digital banking can be sweetened for rural masses by bringing food and fertiliser subsidies under the direct benefit transfer initiative, especially in regions that have high literacy and bank density like Goa, Kerala, Chandigarh, etc.

Questions are being raised whether demonetisation will help contain generation of black money. It is obvious that this measure, how-so-ever bold it may be, is impacting only a part of cumulative stock of wealth stashed in cash. Bigger chunks of black income may be hidden in real estate, jewellery, and even outside the country. Prime minister Narendra Modi has already warned that demonetisation is only the beginning to contain black money, and more is likely to follow soon to attack other components of unaccounted wealth.

However, to attack the generation of black income (flow variable), several other measures would be needed, particularly rationalisation of taxes, from stamp duties to agricultural income tax. At present, agriculture incomes are exempt from income tax, and that has become an easy route for many non-farming actors to hide their income under the guise of income from agriculture. This is a big loophole that needs to be quickly plugged, by bringing agricultural income under taxation with an exemption limit of, say, R7.5 lakh—amounting to three times that for non-farming incomes—to start with. This would exempt almost 98% farmers, even in an agriculturally prosperous state like Punjab. But it will help catch those who are hiding their black income from non-farming operations and are showing it as agricultural income.

Last but not the least, making political funding through electronic transfers will bring more transparency and credibility to government. All these measures, if taken quickly and cohesively, have the potential not only to relieve rural India from current cash crunch but also put it permanently on a digital platform, which will be a major long-term gain. Is the government ready to bite the bullet? Only time will tell.

Follow us on
Latest News
Global Markets: Stocks bounce and dollar falls, investors cling to China COVID optimism
G20: A look at the agenda after India assumes Presidency
Vice President Jagdeep Dhankhar to attend ASEAN-India summit in Cambodia
US Stocks: Futures rise as focus shifts to midterm elections
upGrad to launch 10 global campuses, aims to hire 1000 PhDs
Galaxy Racer joins hands with Sunburn for Valorant India International
Deribit hackers move stolen Ether to Tornado Cash
Photos
Dazzling & Astounding! Proposed design of the to-be redeveloped Dakaniya Talav Railway Station in Rajasthan-PHOTOS
2 days agoNovember 5, 2022
Heart-wrenching! Here is a look at Morbi and the suspension bridge that collapsed
7 days agoOctober 31, 2022
In Pictures: PM Modi in Kargil to celebrate Diwali with soldiers, says, ‘All of you have been my family for years now’
2 weeks agoOctober 24, 2022
Read More
×
Given its track record, India has the moral heft to bring the developed countries to the negotiating table
Data Drive: The adpatation agenda
Premium
What’s in a definition?
Don’t sideline side letters
Will Lula’s Brazil be a game changer at COP27?
Pakistan: Chaos at the cross roads and what it means for India?