Cow and cane: Will they become PM Modi’s pain?

Farmers, who were promised a much better deal in the 2014 BJP manifesto, feel they have been taken for a ride as they are finding it difficult to retain their existing income levels 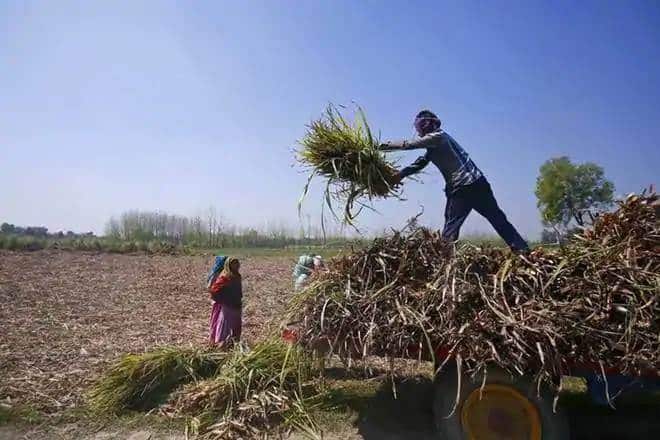 Farmers, who were promised a much better deal in the 2014 BJP manifesto, feel they have been taken for a ride.

If one wants to know about the quality of our evolving democracy, one must watch the ongoing election campaign in India. It is great fun too. And nothing is more interesting than tracking it in Uttar Pradesh (UP), where the real political battle is being fought. As they say, the road to Delhi’s power goes through UP. It accounts for 80/543 Parliamentary seats. In the 2014 election, BJP and allies swept UP with 73 out of 80 seats. Although Narendra Modi came from Gujarat, he contested from Varanasi and scored a thumping victory in 2014. Most agree that it was the Modi wave in 2014!

But in the 2019 election, is the Modi wave still surging or waning? The grand road show of PM Modi in Varanasi seems to suggest that the mood of voters is still upbeat. Modi’s campaign speeches pitch national security and tackling terrorism as the highest priority of his government. He categorically says that he will never hesitate to eliminate terrorists even if he has to bomb their safe havens in the neighbouring country. This brings lots of cheers and chants of “Modi, Modi” from the crowd. But how much of this will sustain till the voting day, and convert into votes for the BJP, will have to be seen. In the meantime, the electioneering pitch has certainly turned hot, even tipping over to remarks that range from ‘Ali and Bajrang Bali’ to as low as ‘khaki underwear’ by certain political leaders. Many others have whipped up emotions to divide people on religious and caste lines, forcing the Election Commission to ban them from campaigning for 48/72 hours.

The moot question, however, remains: will BJP perform in UP as good as it did in 2014? BJP supporters tend to believe that they will repeat the 2014 performance in UP, if not better. But the SP and BSP alliance poses a formidable challenge, and most political analysts believe that BJP will lose significant seats. The best bets for BJP are between 25-40 seats. Analysts also predict that BJP cannot equal its 2014 performance even in Madhya Pradesh, Rajasthan and Chhattisgarh. One of the major factors behind this is the farm distress in this ‘Hindi heartland’, especially in UP. UP farmers are bracing the menace of wandering cattle to protect their fields since the UP government and the vigilante groups came down heavily on cattle traders/slaughter houses. This has adversely impacted the economics of livestock rearing in UP. UP is the largest producer of milk in the country as well as the largest exporter of buffalo meat. Traditionally, Yadavs have dominated the milk sector while Muslims and dalits have been engaged more in the meat sector. Their worsening economic condition and grievances will be fully tapped by SP and BSP for political votes.

Besides this challenge of cattle, there is a serious problem of sugarcane arrears, which have crossed Rs 10,000 crore. The last-minute effort to clear some part of this may help a bit, but farmers do not seem to be very happy in UP. Sugarcane is their most remunerative crop, and when cane arrears mount, their anger spills over to Delhi. Not long ago, many of these farmers from UP had marched and blocked highways to Delhi with their tractor-trolleys and some even had skirmishes with Delhi police at the border. The UP government has been threatening sugar mills with dire consequences if they do not clear cane arrears as soon as possible. But, given the mismatch between sugar prices and the state advised price of sugarcane, sugar mills can pay to farmers only at their own peril. The situation of mounting cane arrears is not new in UP. It is repeated almost every 4th or 5th year, but this time the magnitude is high and it has been going on for more than a year. Farmers, who were promised a much better deal in the 2014 BJP manifesto, feel they have been taken for a ride. The slogan of doubling farmers’ real incomes has not cut much ice with them as they are finding it difficult to retain their existing income levels, which are already pretty low.

Hence the big question: will cow and cane become PM Modi’s pain? The time to carry out any reforms that are needed to bring livestock and sugar sectors back on track, and help augment incomes of farmers, has run out. The hurried, last-minute, announcement of the PM-Kisan scheme to give farm families Rs 6,000 a year has not made much dent, even though UP is at the forefront to distribute that sum. But it is too little, too late. No wonder then, that instead of talking about raising the economic conditions of masses in rural UP, and talk about ‘sabka saath, sabka vikas’, which was the main slogan in 2014, the PM is now talking about successfully conducting ‘Kumbh mela’ in UP and giving befitting replies to those who harbour terrorists. Economics can wait.

Nevertheless, it is interesting to note that UP, with a population of 220 million people, is like the fifth largest ‘nation’ on this planet. More than three-fourths of its population lives in rural areas, with farming as their major occupation. More than 90% of holdings are small and marginal (less than 2 hectares in size). As per NABARD’s Financial Inclusion Survey for the year 2015-16, the average income of a farming household in UP was just Rs 6,668 per month as against Rs 8,931 per month for the country. Ironically, UP’s farm household income is even below those in Bihar at Rs 7,175 and Odisha’s Rs 7,731 per month. Punjab and Haryana are way above. What all this indicates is that no matter which party comes to power at the Centre, UP’s agriculture needs focused attention in order to augment farmers’ incomes. Will that happen?

Gulati is Infosys chair professor for agriculture at ICRIER

Follow us on
Latest News
Rishab Shetty on Kantara: Local cinema is the new global
What is a mono diet? How to detox with it? Know it from Life Coach Mickey Mehta
Work That Speaks | Ad Reviews | 26 Oct to 2 Nov 2022
New Omicron variants not causing significant rise in hospitalisations: Experts
Psychological test mandatory for admission; Uttarakhand’s medical college
UGC NET 2022 Results LIVE: Results expected to be announced soon at ugcnet.nta.nic.in; Answer key released
Petrol, Diesel Price Today, Nov 3, 2022: Fuel rates remain steady; Check rates in Mumbai, Delhi, other cities
Photos
Heart-wrenching! Here is a look at Morbi and the suspension bridge that collapsed
3 days agoOctober 31, 2022
In Pictures: PM Modi in Kargil to celebrate Diwali with soldiers, says, ‘All of you have been my family for years now’
1 week agoOctober 24, 2022
In Pictures: PM Modi inaugurates Deepotsav in Ayodhya; World record set by lighting of over 15 lakh diyas
1 week agoOctober 24, 2022
Read More
×
Next Gen at Tata Trusts
Lula 2.0 can be a game changer
Premium
Towards zero stubble burning
Premium
One Bill to rule them all?
Voting for extremists
A shot at green leadership