VK Sasikala’s husband M Natarajan was in Delhi just before Pongal and met several Congresspersons, including lawyers Kapil Sibal and Abhishek Singhvi, to discuss how to deal with the disproportionate assets case still pending against his wife. 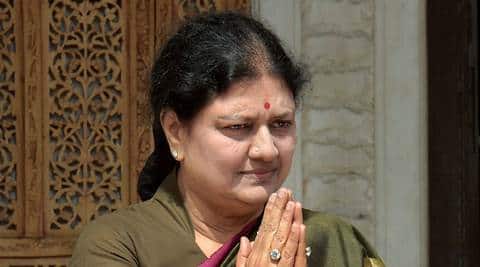 "It is a matter of deep regret that 14 army men who are involved in protecting the Indian borders have died in an avalanche in Kashmir," she said in a statement. (PTI)

VK Sasikala’s husband M Natarajan was in Delhi just before Pongal and met several Congresspersons, including lawyers Kapil Sibal and Abhishek Singhvi, to discuss how to deal with the disproportionate assets case still pending against his wife. Subsequently, in Thanjavur, Natarajan accused a section of the BJP, especially RSS ideologue S Gurumurthy, who has taken over as editor of Thuglak magazine after the death of Cho Ramaswamy, of trying to split the AIADMK.

Sasikala is hopeful of being appointed chief minister by January 29. Most of the AIADMK MLAs are loyal to her and to demonstrate this, they carry her photo in their pocket along with that of Jayalalithaa’s. While there is a photograph of Sasikala in all ministerial offices, there is none of chief minister O Panneerselvam. Sasikala’s immediate future may be secure, but Jayalalithaa’s niece Deepa Jaykumar is playing on her resemblance to her late aunt, bringing out posters of herself and Jayalalithaa dressed similarly, in the hope that it will strike a chord with party workers.

The Election Commission’s verdict allotting the Akhilesh camp the cycle symbol came as a surprise to political observers, including the Uttar Pradesh chief minister. Former CEC SY Quraishi had said that the decision could take months as each affidavit submitted by members of the two factions had to be studied carefully. Since two of the EC members, AK Joti and Om Prakash Rawat, are NDA appointees, Akhilesh had presumed that the symbol could be frozen. Indeed, Ram Gopal Yadav had even begun formalities for obtaining the motorcycle symbol. However, Mulayam played into his son’s hands—despite the advice of his lawyers, he didn’t produce a single affidavit and simply maintained that there was no split in the party. Some wondered whether Mulayam did so because he did not want to harm his son’s interests. Others speculate that the BJP might prefer dealing with a stronger Samajwadi Party; a weak SP would have automatically strengthened the BSP, which hopes to garner a sizable share of the Muslim vote, especially since it has fielded 90-odd Muslim candidates.

Akhilesh Yadav and Rahul Gandhi talked directly to each other on working out an alliance. Both Akhilesh’s wife Dimple and Rahul’s sister Priyanka helped prepare the ground for the talks. The Congress workers may be happy with the alliance since the party expects to win more Assembly seats than it ever dreamed of single-handedly, but the state leaders are sulking. They have lost their importance and will have little say in ticket distribution. There is even an apprehension that some SP party workers could be fielded on the Congress symbol. Mulayam was totally opposed to a tie-up with the Congress and the RLD, believing that the core constituencies of the different parties are incompatible.

Rishi Kapoor, as the title of his riveting autobiography suggests, believes in being “khullam khulla (completely open)”. His frankness has sometimes got the evergreen actor, son of Raj Kapoor and father of Ranbir Kapoor, into trouble. For instance, earlier this year, he tweeted critically about the large number of national assets named after the Gandhi family and demanded to know on what grounds Rahul Gandhi was being promoted as Congress president. This raised the hackles of Gandhi family loyalists. There were threats of violence and mobs were hired to pelt stones at his house. Kapoor was accused of being pro-BJP, though in his book he admits candidly that he eats beef and is opposed to the beef ban. In fact, his family has always supported the Congress party. His point is that the Kapoors may be the First Family of Bollywood, having had a presence for 88 of the 100-odd years of Indian cinema, but each member has had to prove his or her mettle.

When Rahul Gandhi took charge of the Congress, the media speculated that the old guard would be eased out. But judging from the composition of the team selected to accompany Rahul on his postponed trip to China, all ages have been accommodated, from Ghulam Nabi Azad, 68, to Rajiv Satav, 42. The others in the team are: Anand Sharma, Kumari Selja, Jyotiraditya Scindia and Sushmita Dev. Earlier, Ahmed Patel, Sonia Gandhi’s key points person, was appointed by Rahul to head the party’s anti -demonetisation campaign.

Next Story
Intellectual property: GST expected to deal with dual taxation in time, but clarity needed in interim