The P2P lending represents the largest pool of investments, as a category, within the fintech segment, and Lending Club is a market leader in this category. 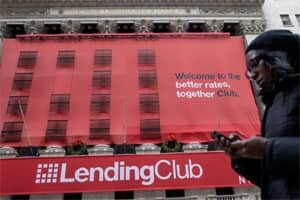 The Lending Club debacle, ten days ago, is making head lines and casting doubts on the veracity of marketplaces for lending and peer-to-peer (P2P) transactions, also referred to as crowd funding. This has led to the resignation of the chairman and CEO of the San Francisco-based company, Renaud Laplanche. Internal control lapses and abuse of sale of some of its loans was cited as the reason.

This is all against the background of growing investments in fintech. The sector grew dramatically in 2015 fueled by demand and need for alternate methods of creating efficient business models—technology being the enabler and driver.

Close to $20 billion was invested in 2015, and for Asia showing fastest growth, investments exceeded $4.5 billion, according to CB Insights.

Also Read
Promoting whose prosperity?
Band-aid for Vodafone Idea
Pressure on the rupee recedes
Agility – A superpower for organisations of tomorrow

The P2P lending represents the largest pool of investments, as a category, within the fintech segment, and Lending Club is a market leader in this category.

The creation of marketplaces were to address the primary lending needs of the consumers and small businesses that were not serviced by the traditional banks. This was more profound after the 2008-09 global financial crisis, when unsecured and even secured lending dramatically dipped almost 35%, with impaired balance sheets. Capital provisions for unsecured loans made it harder when the loan loss rates escalated to high double digits.

The P2P platforms serve both consumers and small businesses and one can observe common fintech players, operating across both these categories.

The prolific growth in the loans books also witnessed the evolution of an ecosystem, with venture capital (VC) backed funding to established and emerging new players securitising and buying these loan assets.

The world is evolving to an intricate model of B2B2C or B2B2B ecosystem. The business models, governance, record keeping, rules of engagement, regulatory jurisdiction are still evolving.

In anticipation of the crisis, Fed announced a discussion paper on May 10, on rules and frameworks to govern marketplaces.

Around the same time, RBI in India and FSB in England have also issued similar discussion papers.

Reverting to Lending Club, the allegations of lapses in internal controls sent its shares plunging and, exposed one of the biggest oddities at the center of its business model. It took other listed lenders like OnDeck with it. Prosper, Avant, Sofi and Funding Circle belong to this category of over $500 million valuation.

While promising to democratise finance by using new technology to match borrowers with lenders, Lending Club has turned to a complicated network of middlemen and professional investors to fund its rapid expansion and disintermediate traditional models. There is no remedy for greed, other than failure.

It is this network that may prove vulnerable to scrutiny following accusations that Lending Club sold non-conforming loans to major investors. Sounds familiar—the 2008 financial crisis led by sub prime mortgages.

The circular nature of the deal raised questions among industry participants as well as eyebrows at the US securities watchdog, which is now reviewing Lending Club’s disclosures.

Institutional investors in loans that originated through Lending Club and other lending platforms have been lured by two promises; the ability of new technology to dampen some of the risks traditionally associated with unsecured lending while simultaneously reducing costs, and secondly, the related assurance of higher returns uncorrelated with more traditional assets such as stocks and bonds.

“The internet, technology, and social habits have finally started to disintermediate banking and lending with the rise of online direct lending platforms, or P2P marketplaces,” read a sales pitch put together by OrchardWay P2P Credit Fund, which invests in certain Lending Club loans via HCG Digital Finance LP.

“This confluence of events has created an opportunity for savers to invest in high quality and lucrative loans that were once reserved for established banks and lending institutions.” Great pitch, but it lacks integrity.

The degree to which such solicitations have proved successful is unknown as is the exact number of funds that have partnered with Lending Club. Many of them borrow using the principles of leverage and lend. Should this scale to a $1 trillion industry and with layers of risks buried under these securitised assets—risks can be cataclysmic. The investors are global.

Some industry commentators have previously questioned the ability of such funds to withstand a downturn in the credit cycle, as well as the rigour with which they both select and value these loans. We can infer from the mortgage crisis, how do you price these assets, when there are no market mechanisms to set or discover prices.

There are already headwinds in the US market with delinquencies rising and lending appetite tapering. It’s these circumstances that can unleash the second spiral, namely charge offs. The relatively nascent stages of the market will make it a cumbersome effort to initiate recoveries, report losses, and charge offs.

Are there remedial measures? These online marketplaces are innovations created with the purpose of bringing lenders and borrowers together. That’s it. They must stick to that goal. There are a number of tasks that can be done by the marketplaces to create an ecosystem of participants—lenders, borrowers, bureaus, record keeping services, regulators, legal houses, escrow services, payment services to list a few.

A number of services can be offered by the platforms and there is enough depth for creating very successful operating businesses—marketing services, lender portals, borrower portals, records management, repayment services, payment services, escrow services, independent social scoring and not risk profiling and let that be the providence of the established players.

Securitisation if done by institutions must come under the regulator scrutiny and monitored marketplaces created to buy and sell loans for liquidity and pricing of these assets. Staying under the covers hurts the efficiency of the market.

Recall, when traditional marketing agencies walked away from digital marketing in 1999-2001, in stepped Google and new firms. Today, digital advertising revenues are over $250 billion globally.

India is in early stages of development of marketplace. As per estimates of a leading investor, R50 crore or less than $10 million worth of loans have been underwritten. It can learn a lot from the lessons and experiences around the world.

RBI has also stepped in, but the elimination of an individual investor from being a lender is not a laudable step. On the contrary, an accredited investor with investible assets of R25 lakh must be permitted to invest up to 5% in this category.

Market expansion can be done progressively with governance rules, oversight and stringent auditing.

Like the payment banks, these lending marketplaces offer great opportunity to bring in transparency and liquidity into mainstream economic activity. It can only help the economy and not hurt it. An ecosystem with clearly defined business rules; with roles and responsibilities is the second step, once the marketplaces are created.

According to Statista, the market is expected to grow from $65 billion in 2015 to $1 trillion by 2025. China is expected to be the leader with some south-east nations.

India must get it right and the fintech players have a role to play with stringent business discipline and a scalable business model and not merely as platform integrators.