Cities at crossroads: Single-use plastic only part of the challenge

Single-use plastics are plastics which are used just once as in disposable packaging, and also in items such as plates, cutlery, straws, cups, etc. 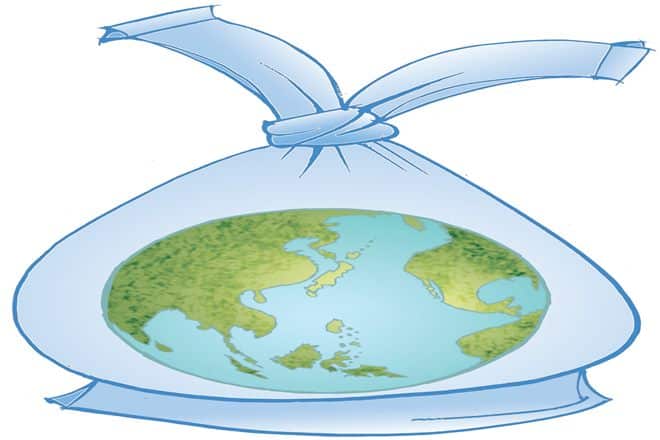 A study by FICCI estimates that 43% of India’s plastics are used in packaging and much of it is single-use.

Prime minister Narendra Modi made a dramatic announcement on August 15 that India would eliminate single-use plastic by 2022. This generated a lot of speculation on whether a ban on single-use plastics was in the offing. Then came another statement on October 2, Gandhi Jayanti, by the Prime Minister that single use plastics will be phased out by 2022, and the officials indicated that states will play a major role in ensuring this happens.

Single-use plastics are plastics which are used just once as in disposable packaging, and also in items such as plates, cutlery, straws, cups, etc. A study by FICCI estimates that 43% of India’s plastics are used in packaging and much of it is single-use. We are also experiencing completely unnecessary single-use plastic entering homes in the form of covers for invitation cards, magazines, bread wrappers, and advertisements.

Ever since plastic was invented by John W Hyatt in 1869, many more inventions of synthetic polymers followed, plastics have been an integral part of our lives, contributing much to the convenience and ease of modern living because of the pliability, flexibility, durability, and lightness of the material. Plastics are used not only in airplanes, computers, cars, trucks, and other vehicles but also in everyday use items such as refrigerators, air-conditioners, furniture, and even casings for electric wires, to name only a few.

The problem is that plastic does not decompose naturally and sticks around in the environment for thousands of years. Safe disposal of plastic waste is, therefore, a huge challenge worldwide. For an excellent short introduction to plastics, see bit.ly/2or5ieh.

Close to 20 states of India have imposed a partial or a total ban on single-use plastics at one time or another. Maharashtra, Tamil Nadu, Telangana and Himachal Pradesh opted for complete bans, while others including Madhya Pradesh, Bihar and Odisha have tried partial bans. Plastic bags have been banned in even a larger number of cases. The bans have by and large not been successful owing to poor state enforcement capacity.

Plastic carry bags pose a special problem. Although they are strong, lightweight and useful, and can be saved, cleaned and reused many times, this is mostly not done because they are available very cheap and are, therefore, not valued (often shops give plastic carry bags for free). They become effectively single-use plastics.

A compulsory charge by retail stores on carry-bags has proven most effective in reducing their use sans a ban. In Ireland, a minor charge added to every bill saw a 95% reduction in demand for such carry-bags, as most shoppers began bringing in their own reusable grocery-bags.

In India, the Plastics Waste Management Rules 2016 included a clause in Rule 15 calling for explicit pricing of carry bags, which required vendors to register and pay an annual fee to the urban local bodies. But lobbying by producers of plastics meant that this clause was removed by an amendment in 2018, that was never put up for public debate, as is mandatory.

In India, plastic producers have been advocating thicker and thicker micron sizes for carry bags. Also, when there is a ban on carry-bags, it instead leads to use of non-woven polypropylene (PP) bags, which feel like cloth and are now even being printed to look like cloth. These are actually more dangerous for the environment as their fine fibres rub off and enter global waters as teeny micro-plastics.

Discarded plastic bags create the greatest problems in waste management. Windblown into drains, they cause flooding of urban areas. Used as waste-bin liners to dispose of daily food scraps, they find their way into the stomachs of roaming livestock. Animals ingest them to get at the food inside and this ultimately causes death. All plastic waste is eventually carried by rain, streams and rivers into the oceans.

We need to build awareness of the damage caused by single-use plastics and develop consumer consciousness to minimise their use. For example, at airports, we could replace meters of cling-film, used to wrap luggage, with a pretty cloth bag temporarily sealed by machine stitching that can later find alternative uses. In our parties, we could use paper plates and bamboo straws. In our pantries, we could use butter-paper as in olden times replacing the millions of bread wrappers needlessly used for a product with shelf life of one to three days. We should also write to those sending us magazines or invitations or advertising in plastic sleeves to switch to tear-proof paper instead. Finally, plastic throw-aways at parties should be replaced with washable reusable tableware.

Single-use plastic can potentially be converted by thermo-mechanical recycling into plastic granules for blending into other plastic products, usually irrigation piping for agriculture. But collection of post-consumer waste and recycling poses a major challenge. This is particularly so when packaging consists of layers of different types of polymer. The multi-layer flexible packaging which is used for Kurkure and other snack foods cannot be made into granules because it contains layers of plastic with different melting points. The Plastic Waste Management Rules of 2016 require creators of such packaging waste to take it back at their cost or pay cities for its management under Extended Manufacturer Responsibility. But there is little compliance.

While it is true that India recycles much more than the industrialised countries through an informal network of waste collectors and segregators (a lot of this is downcycling), a study by FICCI points out that the fast growing consumption has brought us to a point where consumption has clearly outstripped India’s current capacity to recycle plastics.

In our October 2017 column (bit.ly/2JuL4aN) we had pointed out how recycled plastic can be used in strengthening roads. Use of plastics more than doubles or triples road life, and has been approved by the Indian Road Congress (IRC 98 of 2013) and mandated by the National Highway Authority in November 2015 for up to 50 km around every city with population over 500,000. To date over 14,000 km of so-called plastic roads have been built which are long-lasting and free of pot-holes. Only corruption in road contracts inhibits their wider use, as longer lasting roads means fewer contracts for building and rebuilding poor quality roads.

Another ingenious idea is to replace Thermocole with totally biodegradable pith from the shola/sola  plant (Aeschynomene  aspera); this was used in huge quantities till the 1950s for making sola-topees or pith helmets for colonials and their armies. Today, it is used in Bengali weddings and for Durga Puja decorations. Imagine the rural income generation from steady commercial use of this wild marsh-land reed.

We need many more such innovative ideas and a fundamental change in mindsets to minimise the use of single-use plastic. It is high time we also turn to the larger challenge of plastic waste management if we want to avail of the many advantages offered by plastics in our modern lifestyle.