Cities at Crossroads: A looming crisis

The Green Revolution accentuated the need for secure water for the high yielding varieties of food grains. However, inadequate investments and poor planning and maintenance of the irrigation infrastructure meant that canal irrigation was much less effective than planned. 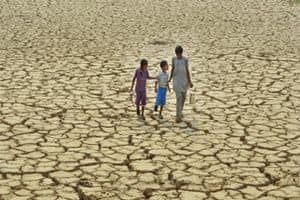 India’s water crisis is even more serious than its energy crisis though this is not generally realised. For energy, alternative sources such as solar and wind energy are becoming more cost-effective. For water, the only major alternative available is desalination and it is far too expensive.

Until about a decade ago, water was seen as a key requirement for the agricultural sector, and the focus was on the need to invest in infrastructure for irrigation, which would reduce the dependence of our farmers on rains and also meet the rural drinking needs. The Green Revolution accentuated the need for secure water for the high yielding varieties of food grains. However, inadequate investments and poor planning and maintenance of the irrigation infrastructure meant that canal irrigation was much less effective than planned. Farmers turned to groundwater with zeal, and they could do this because groundwater extraction was unregulated.

Free or cheap electricity also meant that farmers turned to tube wells and electric pumps as preferred instruments for lifting water from underground. About 80% of the addition to the net irrigated area in India since 1970 has come from groundwater. Since water is not economically priced, it is used inefficiently through flood irrigation. For the same reason, water-intensive crops are grown in areas where water is highly scarce, e.g., rice in Punjab and sugarcane in Maharashtra, thereby contributing further to the decline in water tables.

Over the past decade or so, unplanned urbanisation has highlighted the water problems facing urban India: declining water tables and a serious challenge of water pollution. Urbanisation has been gathering momentum with India’s rapid growth. While only a third or so of India’s population is urban, the share of urban GDP in the total is close to two-thirds. India’s urban population is projected to increase to 600 million and urban share of GDP to 75% by 2031. It is not clear how the resulting increase in urban water demand will be met. Releasing water from agriculture by improving efficiency in water use will certainly help, since agriculture accounts for 80% of the total use of water in the country. Recycling wastewater is another potential source of augmenting water supply for urban areas.

This requires that drinking water, sewerage and wastewater treatment, storm water drains, and also solid waste management be planned and managed in an integrated manner. These services are actually being managed in silos, in some cases by the urban local governments themselves though they are not sufficiently empowered and in other cases by parastatal institutions (metro boards) of state governments.

Even the National Missions are encouraging a fragmented approach by separating solid waste management under Swachh Bharat from the rest under Amrut, and even worse, dispensing with the requirement of a City Development Plan in which all projects must be anchored.

The result is that the state of water delivery in Indian cities is visibly highly deficient. Only 62% of urban households have access to treated tap water and only a little over 50% are directly connected to piped network. The average connected household receives water for approximately 2 hours per day. Only 33% of the urban population is covered by a piped sewer system, while close to 40% is dependent on septic tanks, and 13% still defecate in the open.

Storm water drains are inadequate and ill-maintained, and even natural drains which provide safe exit to storm water including flood water are either encroached or carrying sewage. Natural recharge zones are typically not taken into account in planning for urban expansion.

Wastewater treatment has been a neglected area in India’s urban water planning even though it is crucial to keep our rivers and groundwater clean and also to augment supplies by generating “used water” for gardening, flushing, etc. The capacity to treat sewage or wastewater is only 37% of the total need in the country, and the actual treatment is even less, only 30%.

The sewage treatment capacity is also sometimes redundantly utilised as in the case of Delhi where treated wastewater is discharged into drains and allowed to mix with untreated sewage flowing into the natural storm water drains, and the unholy mixture finally discharges into the river. No wonder then that the Central Pollution Control Board finds that 75% of the measurable pollution in our rivers is from municipal sewage and 25% from industrial effluents. Surveys of ground water also show high levels of microbiological contamination, clearly suggesting contamination from municipal sewage.

The implications of polluted and unsafe water and poor sanitation are extremely serious for public health. WHO data shows that half of India’s morbidity is water related, and there is ample evidence to show that water-borne diseases have been on the rise in India.

When public policy fails to deliver, the gap gets filled by private providers creating markets for water. The solution has been similar to what happened in the case of agriculture: there is increasing but unaccounted use of groundwater by extensive digging of bore wells to meet the demand deficit. The stories of tanker mafia in Delhi are legendary. The result is an accelerated decline in water tables and also increased contamination from fluoride, arsenic, and mercury as efforts are made to dig deeper.

India is the largest user of groundwater in the world with groundwater abstraction at 251 cubic km per year, which is more than double that of China’s.  What is more, India’s use of groundwater is much in excess of the actual recharge being carried out. The states of Punjab, Haryana, Rajasthan and Delhi fare the worst in this respect. A recent assessment by NASA showed a decline in the water table for these four states at an average rate of 4 cm per annum.

The 12th Five Year Plan had called for a paradigm shift and proposed a comprehensive programme for the mapping of India’s aquifers as a prerequisite and a precursor to a National Ground Water Management Programme, and some pilot projects have been initiated.

Ground water use in India is currently governed by the framework of British common law sanctified by the Indian Easement Act of 1882.  This provides that a land owner has the absolute right to draw any amount of ground water from under the land owned by him. The attempt at legislative reform in the past focussed mostly on allocation and setting up a public regulatory authority for groundwater regulation and management such that the state government will take the final decision.

The government of India is currently working on a national water framework bill and also a model groundwater bill which addresses the challenges of equitable access and aquifer protection, moving away from the focus on the link between land ownership and control over groundwater and treating groundwater as a common pool resource to be exploited only for public good.

State governments could adapt the bill to their specific context. This is a bold step which is long overdue. How easy it would be to enforce such a system given the weak capacity for governance at the local government level remains to be seen, though it is clear that this is the only way to go.