Growing population and a rapidly rising demand for electricity in both rural and urban areas, and across sectors, has put an extreme pressure on the ecology. 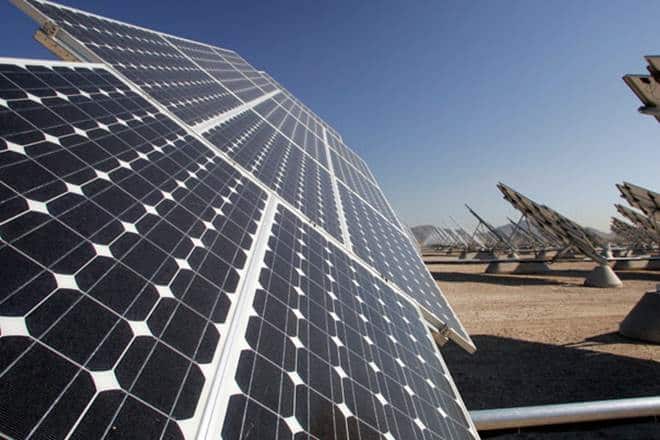 Growing population and a rapidly rising demand for electricity in both rural and urban areas, and across sectors, has put an extreme pressure on the ecology. (Image: Reuters)

Growing population and a rapidly rising demand for electricity in both rural and urban areas, and across sectors, has put an extreme pressure on the ecology. With one of the lowest per-capita electricity consumption and one of the largest solar generation targets, India is paving the way forward to bring sustainable and clean electricity to millions. The tropical country has a vision of reducing its emissions intensity by enhancing the share of renewables in its energy mix. The real thrust on clean energy came with the launch of the National Solar Mission in 2010. As part of the mission, over 1,600MW of grid connected systems and 253MW off-grid systems were installed and commissioned during 2010-2013, during the phase 1 (see chart). The phase 2 of this mission will steer the pumping of 800MW of off-grid systems, primarily in rural areas. In the 2015 Union Budget, Prime Minister Narendra Modi increased the targets of the National Solar Mission 2010 fivefold. The plan of scaling up generation targets from 20GW to 100GW (60% through large and medium scale solar projects, and 40% through rooftop solar projects) by 2022 is the largest ever clean energy target set by any developing country. So far, India has achieved over 8,000MW of grid connected solar power. Currently, India is at the fourth place on the global largest solar power generators’ leader board. These statistics are definitely a ladder to one’s cognitive abilities for computation of volumes of panels, batteries and other associated electrical and electronic components that are being pumped to meet clean energy targets.

It is now time to address the elephant in the room. A 2016 report published by the International Renewable Energy Agency (IRENA) projects India as the producer of over 78 million tonnes of solar e-waste by 2050. While solar technologies enable us to generate enormous amounts of green energy, the components used for generating electricity are themselves not biodegradable. Hence, proper handling of components, after their useful life is over, becomes imperative. With exponentially ramping up of solar power generation, how would we address the prospect of used panels inundating landfills and leaching toxic waste into the environment?

India’s existing rules document—E-Waste Management Rules, 2016—clarifies on the roles and responsibilities of the key stakeholders involved in the e-waste value chain. This is the set of rules referred to in most of the solar power tenders for solar projects in India. However, it does not specifically mention about the issue of management of used components of solar power systems—it only addresses household electronics and not PV panels. Advanced markets like Japan and the growing market of the US face challenges similar to that of India, with no specific regulation for the solar waste generated in these countries, as PV panels are still not identified by the law for specific recycling and regulation. However, in the UK and Germany, its collection, treatment and recycling have been reflected in the respective implementation of the Waste Electrical and Electronic Equipment (WEEE) Directive. This has led to the creation of a separate category for PV panels. Germany has also established a collective producer responsibility system for end-of-life management of business-to-consumer PV panels.

What is holding us back?

At present, the business doesn’t find solar waste management a very lucrative opportunity. In the off-grid sector, owing to the lack of aggregated volumes of PV waste, large players keep their hands off. Large utility scale power projects are not expected to produce PV waste immediately. In general, it will be almost after two decades of the installation and commissioning of a power plant when the efficiency of panels would have fallen below acceptable levels. It is then that the project owners would treat used PV systems as scrap. In the future, it is also expected that power plant owners and commercial spaces would replace PV installed systems, before useful life of panel is over, if very high-efficiency panels are available to them.

In the current situation, it is mostly the unorganised waste collectors who are interested in aggregating e-waste, including panels and batteries. This is evident from the fact that, by the end of last year, there were less than 200 recyclers and dismantlers of e-waste registered with the Central Pollution Control Board (CPCB) of India. There is also a fear that raising concerns about the toxic nature of components used in solar PV system will discourage uptake of solar systems. This will hamper the green tag associated with ambitious clean energy programmes of the government and civil society institutions. Further, doing so might give rise to a wave of pressure groups and environmental advocates who would promote other green technologies such as small hydro and wind energy. Consequently, existing business sentiments might get hampered and the cost of ongoing projects might rise.

A stitch in time saves nine

India has set an example by leading the green energy revolution. It is now time for the country to become an early starter by setting up mechanisms for solar waste management at an early stage; and the efforts in the country have already started. For example, with support from the Norwegian ministry of foreign affairs, The Energy and Resources Institute (Teri) think tank is undertaking a long-term project for recycling of solar PV modules and battery technologies. As a first step, in the off-grid sector, manufacturers and retailers of off-grid products must be mandated to ensure inclusion of relevant text about safe disposal of panels and batteries in user manuals of products such as solar lanterns and solar home light systems. In big-sized tenders, bidders must be mandated to submit proof of evidence for having trained manpower resources and adequate facilities for management of solar waste. In the off-grid areas, setting up institutional mechanisms for waste aggregation will prove to be useful.

For example, the network of the already operational Akshay Urja Shops can be leveraged for aggregation of larger volumes of solar waste at the block or district levels. Institutionalising waste management as a service offering, apart from retail sales, will open newer avenues for micro-entrepreneurs who are operating in the clean energy access space. However, putting regulations into place would not suffice until strict compliance is ensured. In the power sector, we are gearing up to put future-ready systems in place. Similarly, for waste management, it is important for us to plan for the future. It is for us to decide whether we want to interpret green projects in the way we had interpreted the Green Revolution in India, or we wish to look at them through the lens of systems approach.

Martand Shardul is Associate Fellow at Teri and Representative for SDSN Youth in South-Asia; Aashna Agarwal is from the Duke University, US