It is recommended to lay fibre now to small and macro cells, if these cells are to be upgraded to 5G in the coming years. This is to cater to the immense amount of backhaul traffic that will be generated by a 5G BTS 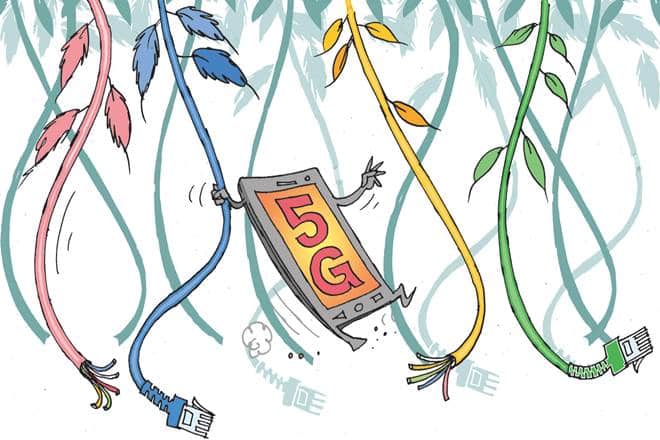 5G could serve as a great replacement for fixed broadband access.

The vision of a 5G network is usually that of an intricate wireless technology offering high data speeds and responsiveness on our mobile phones. Integral to the success of 5G technology is the extensive optic fibre cable (OFC) network that runs underground—5G’s characteristic higher data speeds and throughputs are greatly influenced by these heavy-duty networks that impact both the wireless side and wireline side of the infrastructure. In fact, 5G’s formidable network performance goals are heavily predicated on a massive availability of fibre connectivity, to cell sites and beyond.

The International Telecommunication Union (ITU) estimates ongoing capital investments related to fibre infrastructure will reach a staggering $144.2 billion between 2014 and 2019, in its “Trends in Telecommunication Reform 2017” report. A huge explosion of data, especially video, flowing from tomorrow’s 5G radios and base transceiver stations (BTS) is the primary driver for this immense capital investment into fibre infrastructure deployments.

Mobile data traffic is growing rapidly. According to the Cisco Visual Networking Index, mobile data traffic has grown 4,000-fold over the past 10 years, and almost 400 million-fold over the past 15 years. In 2015 alone, 563 million mobile devices and connections were added to networks. All this usage puts immense pressure on our current wireless networks that are not built to withstand this level of user demand, thus the need for the next generation of wireless networks. So, since wireless is clearly the wave of the future, where does that leave fibre networks? As a matter of fact, we will see a growing demand for a greater optic fibre network to support 5G.

Traditionally, 2G and 3G mobile networks used microwave wireless backhaul to connect cell sites to the nearest mobile switching centre (MSC) over the air. Although this legacy architecture served the industry well for several decades, the advent of 4G and increased data flow has already triggered change. Backhaul upgrades are taking place with legacy copper- or microwave-based cell sites being replaced with IP-based transport over fibre. This provides unlimited capacity to cater to the humongous amount of data being generated by the 4G LTE and LTE-advanced access technologies. These backhaul networks should be suitably leveraged by future 5G networks.

To improve coverage, capacity and overall Quality of Experience (QoE) of mobile users, telecommunications service providers (TSPs) are adopting small cells which strategically place the BTS closer to the users. Small cells can be backhauled either over copper, microwave or fibre. Fibre-based small cell is preferred wherever possible as fibre is scalable, secure and most cost-effective. However, in locations where deploying fibre is either not viable or feasible, they could be served by a number of wireless Gigabit backhaul options, such as E and V band, satellite and HAPS-based options in remote and far flung areas of the rural hinterland.

The math: 4G versus 5G speeds

Today, a typical modern macro-cell (BTS) is served by a 1Gb IP-based optical mobile backhaul network. The typical traffic over this 1Gb physical connection is about 200Mbps to 300Mbps, and leaves room for 4G network growth. Thus, the aggregate bandwidth consumed by all concurrent mobile users to a typical macro-cell is roughly equivalent to the maximum theoretical download speed of a single LTE-advanced (Release 8) user connection. Current mobile backhaul (MBH) networks would soon not suffice even for 4G as it grows. With the expected access speeds and throughputs of 5G, we will inevitably choke existing backhaul networks very quickly.

TSPs connecting 3G and 4G cells using fibre also need to lay the foundation for 5G, which has maximum theoretical download speeds from 1Gbps for high-mobility users (for example, bullet train commuters) to 10Gbps for low-mobility users (those who are stationary or walking). Even if the maximum theoretical download speed of 10Gbps was scaled down by 90% to 1Gbps, the entire 1Gb throughput to a typical macro-cell today, intended to serve all concurrent 4G users, could be easily consumed by one bandwidth-hungry 5G user.

It is, therefore, recommended to lay fibre now to small and macro cells, wherever and whenever possible, if these cells are to be upgraded to 5G in the coming years. This is to cater to the immense amount of backhaul traffic that will be generated by a 5G BTS.

Most bandwidth consumed over mobile networks is related to video-centric content flowing from a distant data centre located across a city or elsewhere. If 5G is aggressively rolled out and delivers real-world access speeds significantly faster to today’s 3G/4G networks, all parts of the wired network connected to the 5G BTS will be affected by the deluge of content flowing to and from data centres. The only transport media capable of scaling to these demands is optical fibre, particularly in the BTS to the hundreds of thousands of small and macro cells deployed.

5G could serve as a great replacement for fixed broadband access. Deployments of fixed 5G wireless broadband access should be quicker and easier than deploying fibre to the premises. One impact of the demand for 5G is the need to push fibre closer and closer to the user. Technology allowed us to do this incrementally over the years, and the industry advanced from fibre-to-the-neighbourhood, then fibre-to-the-curb and now fibre-to-the-home/building. While this sounds like a logical next step, fibre connectivity has historically been challenging, both from a civil works perspective and on the technology front.

Typically, deploying fibre close to the user has meant significant disruption, expense and time. For 5G services to meet their potential, all these challenges with fibre deployment would need to be resolved. Areas targeted for 5G coverage require fibre to be successful, not just for capacity reasons, but to meet the other formidable 5G performance goals of network diversity, availability and coverage. All three goals are achieved through a greater number of interconnected paths of fibre.

Challenges in bringing 5G to India

The global roll-out of 5G commercial services is expected to commence in 2019-20 and India aims to be at the forefront. There is much excitement in the regulatory industry and academia ecosystem, but there are formidable handicaps to be overcome. The percentage of fiberisation of mobile is an illustrative handicap. While comparable regimes like the US and China have over 80% of their towers fiberised, India experiences the inverse—only around 20-25% of towers are fiberised. For 5G, 100% of the towers would need to be fiberised.

The future is about 5G with its promise of less than 1ms latency and 1,000 times the capacity of 4G. If Indian operators plan to stand head-to-head with the Americans and Chinese, they need to accelerate the percentage of towers fiberised and roll out more OFC to leverage both fibre and wireless technology, and deliver 5G to consumers cost-effectively. Or risk being left behind.

Author is President of Broadband India Forum. Views are personal

(With inputs from Debu Bhattacharya)