Tamil Nadu: Tribals to transgenders, how this project is taking the Covid shot to marginalised people 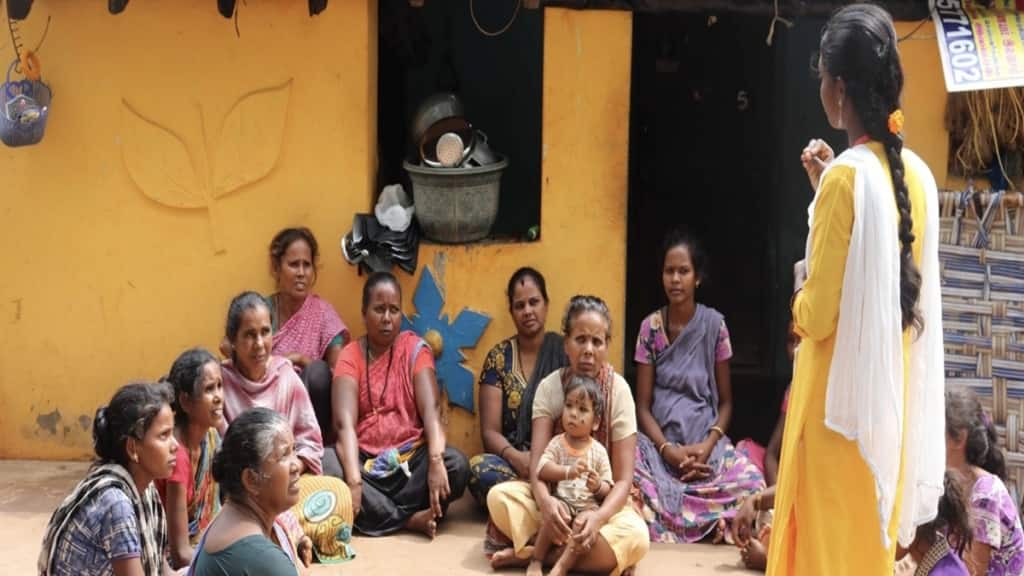 Hiding in forests to claiming they “don’t need” the Covid-19 vaccines, people from several marginalised communities in Tamil Nadu long avoided the jab.

Even as Covid-19 cases have come down in 2022 in comparison with the last two years, vaccine hesitancy has been high among these people. Fear of death, illness, lack of awareness, and misinformation about the shots had made the members of these communities vaccine-hesitant.

To raise awareness and persuade more and more people to get vaccinated, the Momentum Routine Immunization Transformation and Equity project— supported by USAID and implemented through John Snow India Pvt. Ltd (JSI)—took steps to help the government vaccinate members of several marginalised communities in 18 states of India.

Despite ASHA and Anganwadi workers chipping in, the government needed more hands to reach out to these communities to tackle their vaccination hesitancy. This is where Project MOMENTUM stepped in.

Zeroing in on a festival

P Kabilan, a community health worker associated with the Project, said its main aim is to spread awareness about vaccines and ensure that people take them without any hesitancy. Kabilan said though the government is already actively carrying out vaccination programmes, their job is to identify those who had missed their first or second doses and convince them to get the shots against Covid-19.

“We started implementing this in Kallakurichi in February. We saw the Koothandavar temple festival in April as a good opportunity for us to spread this awareness among transgenders. We made people who are familiar with them (transgenders) speak about the benefits of vaccination,” he said.

Kallkurichi is well known for the Koovagam festival, which revolves around transgenders and is held every year in April or May at the Koothandavar temple in the village with the same name.

Project officials said the transgender community was hesitant mostly because they are used to consuming alcohol during the festival and are also on hormonal drugs. They feared the vaccine would prevent them from taking those things.

“Apart from displaying messages on the LED screen and the 4,000 handbills that were distributed to them, we had mentioned that even if they are taking hormonal tablets they can still get vaccinated,” explained Kabilan.

Nagalakshmi Murugan, the Panchayat President of Koovagam, said the project officials got in touch with them 15 days before the mega festival and explained how they were going to implement the vaccination programme. Murugan said nearly 50,000 transgenders from across the state and some even from other countries come for the popular festival.

“Once they approached us, we had no second thoughts. The Panchayat and the project team decided to convince the transgenders to take their shots. We set up a separate space for them during the festival. The vaccines were administered to 15 transgenders in the last two days of the 18-day festival,” added Murugan.

During the annual festival celebrated by transgender and transvestite individuals, the Project officials mobilised them, provided awareness through pamphlets, and even got some of the popular leaders in their community to brief others about the benefits of vaccination.

A big LED screen was placed at the festival for displaying awareness messages related to Covid-19. Police personnel, doctors, and Village Health Nurses (VHN) were also in action during the Koovagam festival to help the project administer vaccines to as many people as possible.

Ambika, 40, a transgender person who has been visiting Koovagam for over three decades, said she is fully vaccinated. She said she wanted to get vaccinated as she did not want to be infected. She also informed the members of her community about the benefits of vaccination and made a couple of them take their shots. “People need not fear, vaccination is good for health. It will protect us from diseases,” she emphasised.

District Project officer Kabilan said they had managed to administer vaccines to thousands, including gypsies, transgenders, nomadic tribes, persons with disabilities, etc, until June. “So far, as many as 25,552 people have been vaccinated here,” he noted, adding their ongoing drive is ensuring these communities take their booster doses.

At the Narikuravar Colony in Samathuvapuram under the Sankarapuram block, there are about 70 gypsy families, who sell colourful bead necklaces and earrings among other items to earn a living. A few of them are graduates and some have also pursued courses to leant tattoo art.

Project officials noted efforts to vaccinate the gypsy population were more challenging as they would slip into their hideouts the moment they saw them.

Saraswathi, who is associated with the project, said they decided to reach out to the gypsies first and started the process to vaccinate the Narikurava community. “When I initially came here, I was shunned. People said they eat non-veg dishes and they have enough immunity to withstand any disease. Some of them even claimed they had taken their vaccines. I came again, managed to speak to a few people, and convinced them about the benefits of vaccination,” said Saraswathi.

“I reached out to their leader, and then we managed to vaccinate 15 people on the first day itself. Then I started coming again to administer the second dose of the vaccine. Whenever I come for other jobs closer to this area, I make a point to visit this colony, enquire people about their vaccination status,” she added.

Radha, 48, who was raised at the colony, said she was initially hesitant about getting vaccinated but based on their leaders’ direction, she agreed to take the Covid-19 shot. She added she doesn’t fear Covid-19 anymore. “I had some apprehension while I was taking my first dose of vaccine but during the second dose, I had no such thoughts,” said Radha.

“On television channels, they said people died after taking the vaccines. We heard that actor Vivek also died after taking the vaccine so we thought if this is the situation for people who have money what will be our situation? But after the volunteers and our leader spoke to us about the benefits of these Covid-19 vaccines and debunked such misinformation, I decided to get vaccinated,” she added.

Latha, who was the first to get vaccinated in this group, echoed similar views. The 58-year-old said she didn’t experience any fever or body pain as was speculated by others. “We travel a lot, so we should get vaccinated. All of us are fully vaccinated,” she said.

Ezhumalai, another Project official, approached the residents of Kalvarayan hills—a tribal block with around 171 villages and a population of about 80,000. “It is very hard to convince the tribal people. At first, they won’t believe you even if you show them proof. They told me that they live in hilly areas in the natural surroundings and they won’t get Covid-19. They refused to allow us inside their streets to brief them about vaccination. They ran inside the forest areas,” he said.

He said people above 60 years even told them they are going to live for just a few more years so there was no need to get vaccinated. “We kept visiting these villages regularly and managed to convince the key influencer of the village. As he took his vaccine and later convinced others, we were able to vaccinate these villagers,” Ezhumalai said.

“We brief them in person and provide pamphlets to those who are able to read. But if we showcase to them something visually, they tend to get attracted quickly. So, we brought some artists to spread vaccine awareness through their play,” he added.

He also pointed out that since these people travel to other states every eight to ten months for work, they had been asked for Covid-19 vaccine certificates by health authorities there and understood that they must get vaccinated.

Velli Kannan, 47, one of the key influencers in Melvazhapadi, noted when he visited Varanasi in Uttar Pradesh recently, authorities at the station asked for his Covid-19 vaccination certificates. Since he was vaccinated with the help of Project MOMENTUM, he travelled without being stopped. Kannan said he informed fellow villagers that only if they are completely vaccinated would they be given work in other states and that made many people take their shots.

“Many here fear that if they take the vaccine, they will get a fever and body pain. I told them it will be alright in just two or three days and the vaccinators will provide tablets. There are about 500 people here and almost everyone has taken their first and second dose of vaccines,” he said.

Keerthi Ammal, also from Melvazhapadi, said since she has blood pressure issues she was hesitant to get her shot but after the volunteers briefed her she got vaccinated. She had already taken two doses of vaccines and during our visit, she was administered her booster dose as well. “What if I was found dead in some field fearing to take these vaccines? I don’t want that to happen. I took the vaccination to save my life,” Ammal said.

Disclaimer: MOMENTUM Routine Immunization Transformation and Equity Project, supported by USAID is implemented in India by John Snow India Pvt Ltd in close collaboration with the Government of India to strengthen their outreach and delivery efforts with communities for vaccination; and through partnerships with local NGOs to increase demand, distribution and uptake of COVID-19 vaccination, particularly for vulnerable and marginalized populations across selected 18 states of India. (Visit: https://usaidmomentum.org/)

Follow us on
Latest News
Mundo Latino – Creating a Latin World in India: A Make In India initiative in the realm of foreign language teaching
Mirchi appoints Yatish Mehrishi as chief executive officer
Indus Towers report on equity conversion delay due to stock price ‘erroneous’, says Vodafone Idea
RBI rolls out CBDC; industry says time to take blockchain and cryptocurrency seriously
7th Pay Commission: No provision for two-time commutation of pension, DoPPW clarifies
Vigilance Awareness Week commences across Indian Railways; Officers take pledge of integrity and transparency
Cryptoverse: Bitcoin wants to break its bond with stocks
Photos
Heart-wrenching! Here is a look at Morbi and the suspension bridge that collapsed
18 hours agoOctober 31, 2022
In Pictures: PM Modi in Kargil to celebrate Diwali with soldiers, says, ‘All of you have been my family for years now’
1 week agoOctober 24, 2022
In Pictures: PM Modi inaugurates Deepotsav in Ayodhya; World record set by lighting of over 15 lakh diyas
1 week agoOctober 24, 2022
Read More
×
Tamil Nadu: Tribals to transgenders, how this project is taking the Covid shot to marginalised people