What to look for when Brahma, Shiva are at work 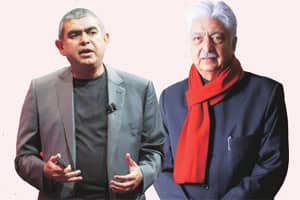 Technology waves since the 1950s have increased the adoption/ proliferation of computing and software use-cases. Absolute IT services spending has however only increased over the long term despite each new technology wave driving new forms of service delivery and cannibalising revenues from those before it. However, in addition to technology waves, IT companies are exposed to Brahma-Shiva (creator-destroyer) cycles and hence investors must be aware of a company’s ability to manage the transition from one wave to another. In this report we highlight the key variables investors should look at in this context. Our relative preference among Tier-1s is Infosys (retain Buy) and Wipro (upgrade to Buy).

Can Tier-1 Indian IT services vendors ride the next wave?
India-based IT services vendors were the biggest beneficiaries of the offshoring wave but the onset of the industrialisation wave (i.e. a focus on tools, accelerators and increasing reuse of code) seems to have caught a few of the incumbents off guard. This has raised the question if India-based IT service providers can ride the cloud-based delivery wave? We think so.

India heritage vendors can continue to gain share:
India-based vendors, as per ISG-One (a market intelligence firm), have won 30-40% of services contracts worldwide (excluding public sector contracts) over the past four years. The share gains can be attributed to their continuing advantages due to offshore leverage, incremental benefits from industrialisation and increasing geographical penetration. While penetration in the US is high, the percentage of spending outsourced relative to other geographies is the lowest. In Europe, while outsourcing is relatively higher, we believe offshoring is lower, leaving significant scope for Indian vendors to grow revenues.

Cloud-based delivery will cannibalise, but we aren’t worried:
According to IBM, 91% of net new software developed in 2014 would be for cloud-based models. This implies that the adoption of cloud-based services delivery will only accelerate going forward. Our conversations with vendors suggest this should throw up significant migration and cloud enablement opportunities, driving incremental growth. Moreover, there are multiple inhibitors that will see continued investments in existing legacy software.

The Brahma (Creator)–Shiva (Destroyer) cycle:
The IT services business is exposed to the Brahma-Shiva cycle (Brahma and Shiva are the Hindu Gods of creation and destruction); however the services business is far more stable than the hardware business, where these cycles are shorter. Investors ascribe valuation premiums for companies based on market perceptions of the management’s ability to take advantage of revenue creators and manage revenue destroyers.

Our preferred picks:
The benefits of managing technology transitions are significant in terms of revenue growth and margins. TCS is a good example of this; however, high valuation and medium-term headwinds restrict upsides (Reiterate Neutral). We prefer Infosys and Wipro on comfortable valuation and our confidence in the managements’ ability to deliver. We maintain our Buy stance on HCL Tech as current valuations are conducive although we see service portfolio risks emerging in the long term.