Virgin America started flying in 2007 with the goal of being low-cost but high-flair. 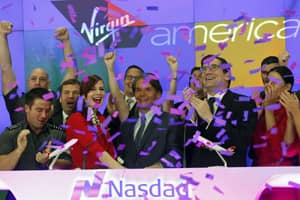 Virgin America made a successful takeoff in its public trading debut Friday.

The timing of the IPO by the Richard Branson-backed airline could hardly be better. Airlines stocks have soared as the carriers reap huge profits thanks to full planes, rising revenue and falling fuel prices. After years of losing money, Virgin America is now profitable.

The airline priced the shares at $23, near the middle of its announced range of $21 to $24 each, and raised more than $300 million before expenses. The ticker symbol is ”VA.”

Virgin America Inc. started flying in 2007 with the goal of being low-cost but high-flair. Its Airbus jets feature mood lighting, leather seats and seatback touch screens for watching TV, ordering drinks or chatting with passengers in other rows.

The airline, which is based in Burlingame, California, scores well in traveler surveys but lost money for six years until earning $10 million in 2013. It is hobbled by limited destinations and a thin schedule. Virgin carried about 6 million passengers last year – less than 6 percent of the crowd that flew on Southwest Airlines. And Virgin’s key transcontinental service faces stiff competition from American, Delta, United and

JetBlue, which are chasing the same lucrative business travelers with amenities such as lie-flat seats.

In an interview on Friday, CEO David Cush said he is confident that his airline would compete on those key routes and said that having a lie-flat bed on a 5-hour cross-country flight was overrated.

Branson’s Virgin Group remains a minority stockholder. The billionaire’s empire suffered a setback last month when a test-flight accident destroyed Virgin Galactic’s SpaceShipTwo, designed to carry tourists into space for $250,000 each. A test pilot was killed. Cush said the accident would not affect the airline.

”We’re obviously sad to lose someone from the family, but we also understand that they’ve got a bit of a high-wire act they’re trying to do there,” Cush said. He said that the accident would not cause Branson to shrink from his role as the public face of the airline.

Airlines and their shareholders have been flying high the past two years. Mergers have reduced competition and fares have increased.

Since the start of 2013, shares of many major U.S. airlines have more than doubled; Delta Air Lines Inc. and Southwest Airlines Co. have jumped about four-fold. Airline stocks sagged briefly in early fall, but they’ve been rising again since early October on falling prices for jet fuel – just in time to boost Virgin’s public stock offering.

”Everything just worked out,” Cush said.