US Federal Reserve Chair Janet Yellen’s statement that case for US interest rate hike has strenthened will not have a knee-jerk reaction on the domestic equity markets, experts said. 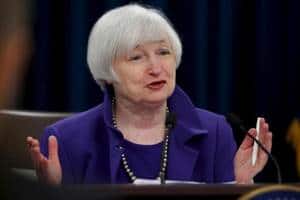 "Our current toolkit proved effective last December (when the Fed raised rates)," Yellen said in a speech in which she firmed up expectations of a second rate rise from the Fed, possibly as soon as September. (Reuters)

US Federal Reserve Chair Janet Yellen’s statement that case for US interest rate hike has strenthened will not have a knee-jerk reaction on the domestic equity markets, experts said. Yellen made this statement at the three-day international meeting of central bankers in Jackson Hole, Wyoming, however she didn’t give a timeline for the rate hike.

Market experts in India said that Yellen’s speech was on expected lines. However, they had mixed opinion about how markets will open on Monday. Sudip Bandyopadhyay, chairman, Inditrade Capital said,”Indian stock markets will have no impact and may see a flat opening on Monday.

Independent market analysts Ambareesh Baliga said rate hike in US is anyways expected going forward. He added, “The only fear was whether rate hike would be in near future. Yellen’s speech today has put to rest the fears of rate hike for a while.” On local markets movement on Monday, he said that there could be a relief rally or a bounce back.

The US Fed hd last raised rates in December 2015, its first hike in nearly a decade, but it has held off further increases so far this year.

Chandan Taparia, analyst with Anand Rathi Securities said that reluctance for a rate hike even after so many meeting is due to Brexit and current US economy situation. He further added that she has been upbeat on crucial US data. “If rate hike happens then that will be negative as FIIs flow will move back to their own country specially FIIs from US nations,” he said. “Volatility which is already at lower levels might see more cool off and consolidation in global and Indian market.”