As US Fed 2-day meeting begins today, what world markets are expecting

At the end of a two-day meeting, America’s central bank will decide if it is time to raise interest rates, the first since June 2006. Indian Express explains why economies around the world are worried. 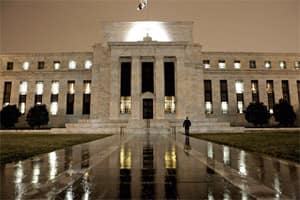 Large financial firms will have to show how they would survive a "severely adverse scenario", including a global recession where U.S. unemployment shoots up to 10 percent and short-term U.S. Treasuries pay negative yields, in this year's bank stress tests, the Federal Reserve said on Thursday. (AP)

The Federal Reserve is America’s central bank. Why is the rest of the world interested?

Over the next two days, September 16 and 17, the US Federal Reserve System will meet to see if the growth rate in the US economy has achieved a certain critical mass and if it is time to raise interest rates. If that happens, it will be the first rate hike since June 2006. The US dollar sits at the centre of the global financial system and any decision by the Federal Reserve can cause ripples throughout the global economy. While a slowing down of the Chinese economy has already rattled markets worldwide, a rate hike in the US could come as another setback for emerging economies such as India. A strong dollar has always meant bad news for these economies since global capital may start flowing back into US treasury bonds.

So what is Fed Reserve expected to do?

The Federal Open Market Committee of the Federal Reserve concludes its meeting on Thursday, at the end of which the announcement on a possible hike in federal funds rate (interest rate) is expected — the first in nine years. This is probably a suitable time to hike rates because following the global financial crisis of 2008, the US Fed kept interest rates low and now, its economy has seen a revival, both in terms of growth and job creation. Many in the US believe a rate hike is important now as a low interest rate regime may create bubbles across various asset classes. According to a recent report by credit rating agency India Ratings, “Interest rates have been too low for too long and may have resulted in excessive risk seeking over the years.”

Does everyone agree that it’s a good time to hike rates?

There are many who think this isn’t a good time to hike rates — when markets around the world are unsteady, when commodity prices have witnessed a sharp fall and when there is evidence of China’s economy slowing down.

Why are emerging economies worried?

The rate hike, if it happens, is expected to be small but will set the tone for more hikes. That’s something emerging countries are worried about. These countries have already seen their currencies and capital markets bleed following the upheaval in Chinese trade data. That, along with by a fall in commodity prices, has spooked global investors into pulling money out of emerging economies over the last couple of months. These economies are now worried that a Fed rate increase will only precipitate the outflow of funds from their economies into the US, thereby putting more pressure on their currencies and stock markets indices.

How did Indian markets react to the last rate hike in the US?

Between 2004 and 2006, the Federal Reserve raised interest rates 17 times — from 1 per cent in June 2004 to 5.25 per cent in June 2006. This coincided with a period of high growth in the Indian economy along with a relatively low interest rate regime. The repo rates (rate at which RBI lends money to banks) stood at 6 per cent for most part of these two years and RBI started raising the rates only after November 2005.

The US rate hike, however, resulted in a sharp outflow from Indian debt markets (such as government bonds). Following the rate hike, Foreign Institutional Investors (FIIs) pulled out significantly from the Indian debt market and their cumulative holding went down from $1.77 billion in December 2004 to $550 million by June 2006.

On the contrary, Indian equities, chasing high growth in the economy, witnessed a strong inflow — FIIs pumped in a record Rs 1,22,687 crore between 2004 and 2006. But that was a time when asset classes were doing well and there were fewer uncertainties.

Will the impact be significant this time around?

A lot has changed in the Indian economy since the last rate hike in 2006. Primarily, the FII exposure to Indian markets is far more pronounced than it was in 2004. While FII money in Indian equities was $30.6 billion in May 2004, it has now jumped five times to $165 billion. But even if equity flows turn volatile in the short term, they are expected to stablise with India expected to clock a higher GDP growth rate. The real concern is on the debt side. From $1.77 billion in December 2004, foreign investment in debt markets has grown over 30 times to $57 billion. And if FIIs in debt markets rush to pull out following a possible Federal Reserve rate hike, that could end up putting pressure on the Indian rupee.