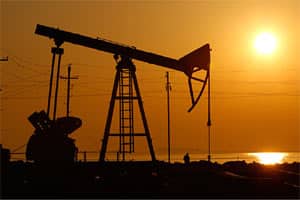 The world's top two oil exporters, Saudi Arabia and Russia, will hold talks together with their counterparts from Venezuela and Qatar in Doha on Tuesday, sources told Reuters. (Reuters)

US oil prices jumped back above $30 a barrel on Tuesday as news of a rare private meeting of top officials from the world’s biggest oil producers spurred speculation of an eventual deal to tackle a deep supply glut.

London Brent crude for April delivery settled 3 cents higher at $33.39 on Monday and had risen above $34 a barrel after the news before trading hours ended.

The world’s top two oil exporters, Saudi Arabia and Russia, will hold talks together with their counterparts from Venezuela and Qatar in Doha on Tuesday, sources told Reuters.

Oil prices have fallen to their lowest in more than a decade over the past year due to booming U.S. supplies and a decision by OPEC to ramp up exports which was aimed at driving higher-cost producers out of the market.

Saudi Arabia has said it would cut output only if non-OPEC producers agreed to join it.

Russia, the world’s top producer, has long refused to cooperate, saying its industry was competitive at any price and it was technically challenging for Moscow to reduce production.

The mood started to change in January as oil prices fell below $30 per barrel – a fraction of what Russia needs to balance its budget as it heads towards parliamentary elections later this year.