Bharti Airtel shares ended 1.91 per cent down even as the company reported 10.1 per cent jump in consolidated net profit for the quarter ended September 30. 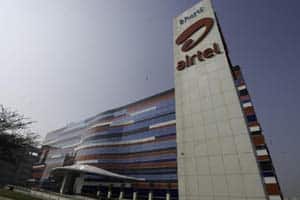 Standard & Poor's has kept rating of Bharti Airtel unchanged post the company's plan to spend Rs 60,000 crore over the next three years even as it anticipates that the investment will slow down the improvement in Bharti's financial ratios. (Photo: PTI)

Domestic equity markets ended about 0.5 per cent lower on Monday, retreating from over two-month highs hit in the previous session as investors booked profits even as Asian equities gained after China cut interest rates for a sixth time in less than a year. Sensex fell 108.85 points to end at 27,361.96 and Nifty dropped 34.90 points to 8,260.55.

Below are the stocks that made news today

Bharti Airtel: Bharti Airtel shares ended 1.91 per cent down even as the company reported 10.1 per cent jump in its consolidated net profit for the quarter ended September 30.

Force Motors: Share price of Force Motors ended 3.93 per cent up at Rs 3,613 after the company posted a 65.35 per cent rise in net profit for the second quarter ended September 30.

Sterlite Technologies: Share price of the company ended 6.89 per cent down at Rs 93.20 even after its standalone net profit more than doubled to Rs 29.39 crore for the quarter ended September 30.

Eros International Media ended 19.11 per cent down after an analyst raised questions about its business operations.

More Stories on
Stocks in focus