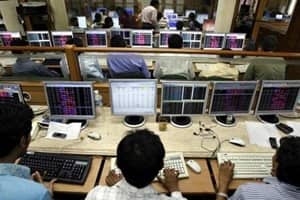 Ramky Infrastructure shares settled the day 3.19 per cent up at Rs 67.85 on BSEafter the company bagged road projects worth Rs 612.88 crore in the states of Chhattisgarh and Punjab. (Photo: PTI)

The BSE Sensex managed to end 34 points higher at 22,986.12 on Friday, but recorded its biggest weekly fall in more than six years as fears of a global slowdown and muted quarterly numbers of blue-chips, especially banks, hammered stocks during the week. The NSE Nifty in choppy movements, tested the 7,000-mark to touch a high of 7,003.80 points at the outset and finally ended 4.60 points or 0.07 per cent up at 6,980.95.

Unitech: Shares of the realty firm settled the day at 2.20 per cent down at Rs 4 after the company reported a consolidated net loss of Rs 16.10 crore for the quarter ended December 31.

Tata Motors: Shares of the company ended the day later 8.34 per cent up at Rs 298.65 after Deutsce Bank upgraded automobile company’s stock to ‘Hold’ from ‘Sell’. The brokerage said that the earnings highlighted their worst fears as the company suffered from weak pricing and profitability. However, it added price correction in past six months justified a rating upgrade.

TeamLease: Shares of staffing firm TeamLease Services debuted at the bourses on Friday. The scrip later closed 20.23 per cent up at Rs 1,021.95 against the issue price of Rs 850.

Oil and Natural Gas Corp (ONGC): State-owned company closed 4.56 per cent down at Rs 193.55 after it on Thursday reported its lowest quarterly profit in more than 15 years as it took one-time impairment charge on reserves due to slump in oil prices.

Tata Steel: Global agency Moody’s on Thursday downgraded credit ratings of Tata Steel on a weaker than expected operating performance in its key operating markets of India, Europe and Southeast Asia on account of persistently weak steel prices. The scrip settled 3.18 per cent down at Rs 217.85.

Srei Infrastructure Finance: Share price of the company closed 3.92 per cent down at Rs 45.35 after it on Thursday said that its consolidated net profit declined by 27.25 per cent to Rs 17.16 crore for the third quarter of 2015-16 fiscal.

Lanco Infratech: The company on Thursday reported a consolidated net profit of Rs 136.49 crore for the quarter ended December 31, 2015 on the back of better performance of operating power projects and write-back of tax provisions. The scrip settled the day 3.37 per cent up at Rs 5.83.