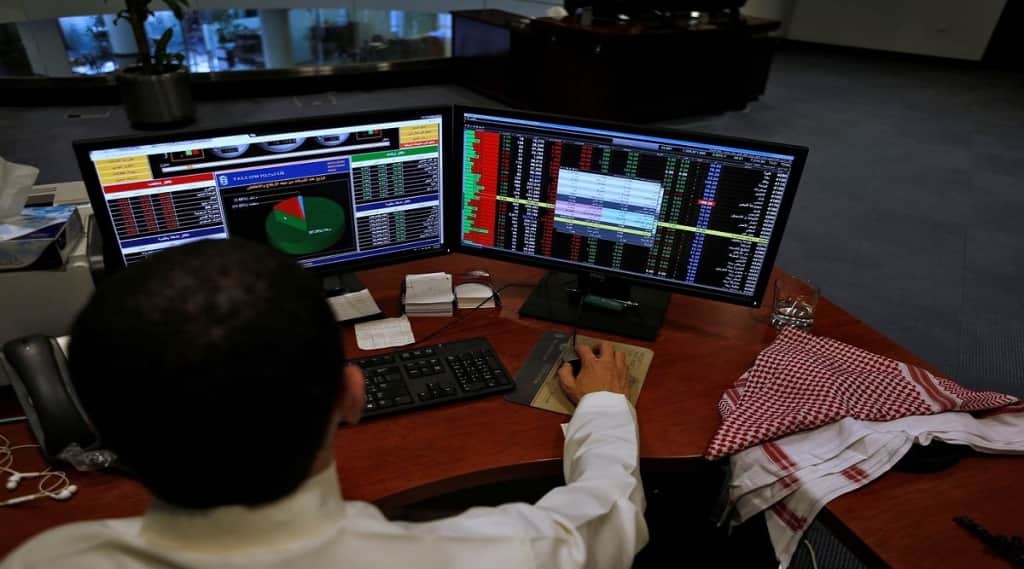 Domestic benchmark indices managed to extend their up-move, narrowly, to the fifth consecutive trading session. Headline indices Sensex and Nifty closed with marginal gains after a volatile trading session on Tuesday. S&P BSE Sensex added 20.86 points or 0.04% to settle at 58,136 while NSE Nifty 50 index ended at 17,345 points gaining 5.4 points. IndusInd Bank was the top gainer on Sensex, up 2%, followed by Asian Paints, and NTPC. Tech Mahindra was the worst performer, ending 1.85% lower accompanied by HDFC, L&T and HDFC Bank. Bank Nifty outperformed and closed above 38,000 mark while India VIX ended 5.95% higher at 18.53 levels.

Sensex and Nifty were down in the red ahead of the closing bell on Tuesday. Sensex was shy of 58000 while Nifty slipped below 17300.

Sensex and Nifty were trading flat with marginal gains on Tuesday just ahead of the closing bell.

India VIX, the volatility gauge, was up 5% on Tuesday. The index has breached 18 levels.

“With the softening of many commodity prices, CPI inflation seems to have broadly peaked at the current levels and expected to witness a downward movement to below 6% by Q4FY23. However, domestic inflation is still high and so is the global commodity prices, we expect RBI to continue with front-loading of rate hiking cycle. We expect 50 bps of repo rate hike in the upcoming policy and another 50-bps rate hike post that taking the terminal repo rate to 5.90% by the end of the fiscal year,” said Rajani Sinha, Chief Economist, CareEdge.

Index heavyweights such as Reliance Industries were trading with gains, pulling the index out of the negative territory ahead of the closing bell.

“If you are sitting on profits – take them. If you are taking fresh trades, focus on position sizing and do not outdo yourself at these levels = Meaning trade in small qty. China-Taiwan issue could be the reason for a dip of around 300 – 400 points in Nifty,” said Rahul Sharma, Director & Head – Research, JM Financial.

Higher NIM and lower apex led to a 1,109 q/q improvement in Indian Bank’s C/I ratio to41.9%. Higher credit costs (~2%) led to muted profitability, with the RoA at0.7%. Slippages were elevated; however, higher write-offs led to improved GNPAs. Ahead, we expect slippages to moderate substantially as most of the stress has already been recognized. Besides, we expect the bank to gain market share from its peer banks. We retain our positive view on it, at a TP of Rs205,valuing it at 0.5x P/ABV on its FY24e book. Anand Rathi Share and Stock Brokers

“India VIX has inched higher and is near 18 levels which is providing comfort to the market to scale higher. Now as long as long as the index trades above 17150 we can expect higher levels of 17350 and 17500 whereas on the lower side support is placed at 17150 and 17000. Market breadth is positive which is indicating buying interest at lower levels,” said Chandan Taparia, Vice President, Equity Derivatives and Technical, Broking & Distribution, Motilal Oswal Financial Services.

“Nifty formed a long bullish candle with bullish runaway gaps indicating that the trend remains intact and is likely to continue its positive momentum. On the oscillator front there are still no signs of exhaustion, or any reversal signal are being unfolded. On the contrary, Weekly RSI clocked breakout from 6 months falling trend line indicating long term positive bias. The psychological level of 17000 which further coincides with the 200 dma would be the immediate short term trend deciding level for the market. On the upside the elevated target level for Nifty is around 17500 (being 80% retracement of two-month decline (18100-15183). Improving market breadth measured by percentage of stocks above 50 & 200DMA within Nifty 500 universe augurs well for durability of ongoing up move. Hence, intraday dip towards 17190-17222 can be used creating a long position for the target of 17500,” said Tirthankar Das, Head of Technical Research, Ashika Group.

Sensex trimmed losses but was still in the red on Tuesday. The headline indices touched 58000 mark once again after having slipped below its during the early hours of trade.

Another Adani Group firm could enter the NSE Nifty 50 index in the upcoming Semi-annual Index review, according to Abhilash Pagaria, Head – Edelweiss Alternative & Quantitative Research. With the cut-off date of July 29 behind, analysts at Edelweiss Alternative & Quantitative Research believe that Adani Enterprises is best placed to enter the headline index and could replace Shree Cements in the 50-stock pack. NSE indices are rebalanced twice every year and changes are made to the index constituents based on various factors. Edelweiss also anticipates a host of other changes to various indices managed by NSE.

Zomato stock price is up 16% on Tuesday, hitting an intraday high of Rs 54.9 per share. The sharp up-move in the stock came a day after the food delivery giant announced its quarterly results.

Capital goods sector stocks have given a breakout from their falling channel signalling the end of the short-term corrective phase, according to analysts at ICICI Direct. The brokerage firm added that their bottom-up work also suggests a remarkable improvement in momentum rankings for most companies in the sector augmenting an overall bullish stance. The sector posted a breakout from the 12-year consolidation phase in the middle of 2021 and is now signalling major uptrend over the coming few years. Among the sector constituents, analysts noted that Grindwell Norton, Greaves Cotton, and KSB are three stocks that are favoured by the charts for an up-move.

Having closed near 17320, our turnaround point for yesterday, today is likely to be an eventful day. The favoured view expects a dip towards the 17240-110 region, but a burst above 17355, would signal the continuation of the 17500 move.~ Anand James – Chief Market Strategist at Geojit Financial Services

ITC share price jumped nearly 3 per cent to a new 52-week high of Rs 316.65 apiece on BSE on Tuesday, after the company’s consolidated net profit rose 33.46 per cent on-year to Rs 4,462.25 crore in April-June 2022. The company had posted a profit of Rs 3,343.44 crore during the corresponding quarter of previous year. ITC stock has surpassed its previous high of Rs 308.80 touched on Monday. Analysts see up to 15 per cent potential upside in the stock, with a target price at Rs 355 apiece. In the last one year, ITC share price has soared more than 50 per cent, and 42.13 per cent so far this year. The stock has rallied more than 34 per cent in the last six months, and 7 per cent in one month. Read full story

Tata Steel was the worst performing Sensex stock on Tuesday morning. Tata Steel shares were down 1.43%, followed by Tech Mahindra, and Axis Bank.

Sensex and Nifty started Tuesday's trade in the red with Sensex giving up 58,000 mark and Nifty 50 slipping below 17,300.

Sensex and Nifty were down in the red with marginal losses ahead of the opening bell on Tuesday morning.

Sensex rose at the beginning of Tuesday's pre-open session while Nifty 50 was in the red.

“The market message from the sharp decline in the US 10-year bond yield to 2.57% from the recent high of 3.27% is that the Fed is nearing the end of its tightening cycle with only one more large hike in September and small hikes thereafter taking the terminal rate to around 3.5%. This has facilitated the rally in global markets with India emerging as one of the best performers. There is a consensus that India will be the fastest growing large economy in the world this year and next with the least vulnerability to a global growth slowdown. This, and the dollar index dipping to below 106 from the recent high of above 109, have paved the way for the return of FIIs who have turned consistent buyers now. The 2100-point rally in Nifty from the June lows has pushed the market into overbought territory with rising valuations. Markets are likely to consolidate in the near-term. Capital goods and autos (the PV and CV segments) are on a strong wicket,” said V K Vijayakumar, Chief Investment Strategist at Geojit Financial Services.

“Asia stocks continued a decline from Wall Street on Tuesday, as investors worried about the risk of global recession. There were also jitters about an escalation in Sino-U.S. tension with U.S. House of Representatives Speaker Nancy Pelosi set to begin a visit to Taiwan against the objections of China, which regards the self-governed island as a breakaway province,” said Deepak Jasani, Head of Retail Research, HDFC securities.

“As the supply situation for electronic components improves, the sector's prospects are expected to advance, aided by commodity price corrections and increased demand visibility. Since the beginning of April 2022, there has been a 30-40 percent correction in the international prices of aluminium, copper, and steel. In July, average domestic PV and CV volume increased by 17.7% and 37.8% YoY, respectively. We anticipate a revival in the 2-wheeler industry in the second half of the year, thanks to the festive season, good monsoon, and increased farm activity. Other positive indicators include an increase in the EV share and favourable valuation to support growth,” said Saji John, Research Analyst at Geojit Financial Services.

08:18 (IST) 2 Aug 2022
A temporary breather should be utilised as incremental buying opportunity

The current rally of 13% is larger in magnitude since April 2022. Consequently, rallies are now getting bigger along with shallow correction, indicating structural improvement that makes us confident to upgrade target to 17500 in the month of August while 16700 remains immediate support as it is 61.8% retracement of current week’s rally (16438- 17172) coincided with the positive gap recorded post U.S. Fed meet outcome on 28th July 2022 (16641-16746). Hence, a temporary breather from hereon should be utilised as incremental buying opportunity.

Petrol and Diesel Rate Today in Delhi, Bangalore, Chennai, Mumbai, Lucknow: The prices of petrol and diesel on August 2, were left untouched by OMCs once again. Prices have held steady for 69 days now across the country, except in Maharashtra. Pieces were cut in Maharashtra when the state government announced a cut in value-added tax (VAT) on petrol by Rs 5 a litre and by Rs 3 a litre for diesel earlier last month — a move that will cost the state exchequer Rs 6,000 crore on an annual basis. For the rest of the country, prices have been steady since May 21 when Finance Minister Nirmala Sitharaman announced a cut in excise duty on petrol by Rs 8 per litre, and Rs 6 per litre on diesel.

Zomato: With four companies in its kitty, food tech major Zomato is looking to have a multiple CEO structure for these businesses and may name the larger organisation, Eternal, for internal purposes.

Stocks in Asia retreated Tuesday amid escalating US-China tension over Taiwan and deepening worries about a global economic slowdown, risks that are supporting demand for bonds as a haven. Shares dropped in Japan, South Korea and Australia, while futures for Hong Kong earlier shed more than 1%. S&P 500 and Nasdaq 100 contracts declined after July’s global stock market rebound stumbled into August.

SGX Nifty was down in the red on Tuesday morning. Nifty futures traded 70 points lower ahead of the opening bell.

The goods and services tax (GST) collections came in at Rs 1.49 trillion in July (June transactions), up 28% on year, thanks to resurgent economic activities, improved compliance, high inflation and a broadening of the tax base. The collections crossed the Rs 1.4-trillion mark for the fifth straight month. The July mop-up was also the second-highest in any month.