Salman Khan asked to surrender before the trial court and furnish a bail bond of Rs 30,000. 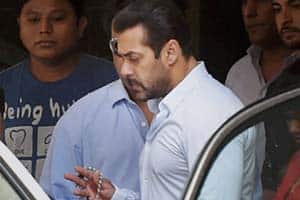 Salman Khan leaves for the court from his residence in Mumbai on Friday. The Bombay High Court on Friday suspended Salman Khan's five year prison sentence in the hit-and-run case. (PTI)

Shares of Eros International Media and Mandhana Industries, the entities associated with Bollywood superstar Salman Khan, surged up to 8.5 per cent after the Bombay High Court suspended the actor’s 5-year sentence in the 2002 hit-and-run case.

Mandhana shares staged a comeback soon after the news of relief to the actor came in and gained 3.48 per cent to Rs 264.

In a huge relief to Salman Khan, the Bombay High Court today suspended his 5-year sentence in the 2002 hit-and-run case and granted him bail pending his appeal against conviction.

The single bench of Justice Abhay Thipsay directed him to surrender before the trial court and furnish a fresh bail bond of Rs 30,000.

The judge, had on May 6, granted 48-hour interim bail to the actor, hours after he was convicted and sentenced to five years of rigorous imprisonment by the trial court on the ground that he had not been supplied with a detailed order explaining the reasons for his conviction.

The term of interim bail was to expire today.

Mandhana Industries is associated with the actor’s NGO ‘Being Human’. It has an exclusive licence agreement with Being Human – the Salman Khan Foundation – for designing, marketing and distributing Being Human clothing products.