Rupee may appreciate on decline in crude prices, retreat in dollar; USDINR pair may trade in this range

The rupee is expected to appreciate today amid retreat in US dollar and sharp decline in crude oil prices. However, sharp gains may be prevented on risk aversion in the global markets and persistent FII outflows. Investors will focus on inflation number from US that could influence Fed’s path for interest rate increases. 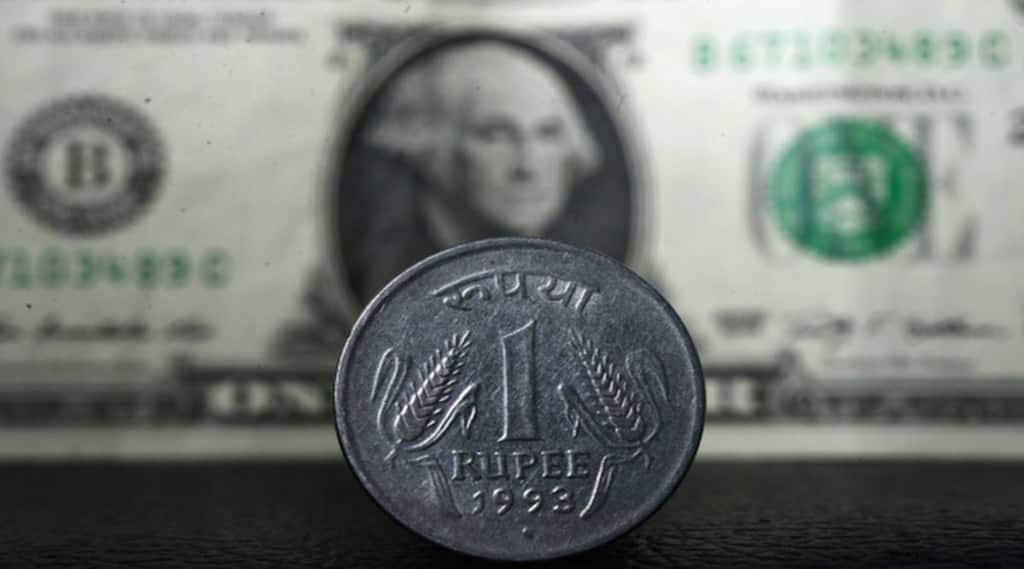 The rupee is expected to appreciate today amid retreat in US dollar and sharp decline in crude oil prices. However, sharp gains may be prevented on risk aversion in the global markets and persistent FII outflows. Investors will focus on inflation number from US that could influence Fed’s path for interest rate increases. US$INR (July) is expected to trade in a range of 79.40-79.85, according to ICICIDirect. In the previous session, rupee closed at fresh record low as the dollar index touched a 20-year high of 108.56 intra-day and FIIs sold shares worth a provisional Rs 1,566 crore. The local unit ended 15 paise lower at 79.60 against the US dollar after hitting a historic intra-day low of 79.66. The domestic currency has depreciated 6.7 per cent this year, weighed by the persistent FPI sales and the relentless surge in the dollar.

“Indian rupee could open slightly higher following better than expected inflation and industrial output data, released after our market closed. However, the question remains how long it will hold the gains as strength in the dollar index and capital outflows limit the gain in the rupee. From the positive front, the southwest monsoon is progressing very well with cumulative rainfall 9% above normal as of July 12 and crude oil prices tumbled below $100/barrel both of these give a hint of lower inflation in the coming months.

On Tuesday, spot USDINR gained 17 paise to 79.60, another lifetime high replicating strength in dollar against major currencies. The fear of recession, foreign capital outflows and high inflations backing the king dollar. The set-up for USDINR remains bullish as long as it holds the level of 78.80 but for today, we could see consolidation in the range of 79.80 to 79.40.”

“Rupee continued to remain under pressure and fell to its record lows following broader strength in the dollar against its major crosses. Gains were limited even after the RBI announced some measures to curtail sharp depreciation of the currency. On the domestic front, data showed inflation eased slightly to 7.01% in June from 7.04% the previous month. Euro fell to a fresh 20-year low against the US dollar nearing parity as investors worried that an energy crisis in the region would bring on a recession.”

“Weakness in the currency extended after data showed German investor sentiment in July plunged below levels at the outset of the coronavirus pandemic due to energy concerns, supply bottlenecks and rate hikes from the ECB.  Today, focus will be on the inflation number that will be released from the US and a higher number could further build expectation of aggressive rate hikes from the Fed. We expect the USDINR(Spot) to trade with a positive bias and quote in the range of 79.05 and 79.80.”

“USDINR opened higher but failed to drift much higher, as possible central bank intervention capped its advance. This has become a daily ritual where the market forces try to engineer an up move but RBI pushes against it. Some days they are successful but most days it either flat or prices pull back. As long as the US Dollar Index continues to power ahead, USDINR will have the pull upward.”

“US CPI is an event risk but considering the fact that every news item is talking about 9.00+% print, it seems we may not get the kind of reaction that we got when the May CPI was out and US Dollar shot higher after that. Today, how far the USDINR pair can move higher will be driven by whether EuroUSD breaks parity and trades well below it or not. If it does, then it can push USDINR even closer to the 80 handle, or else, we will be in a rangebound phase with an upward bias. Support is near 79.50 and 79.25. Resistance is near 79.80 and 80.05 on July futures.”

“Indian Rupee was seen trading sharply lower at all-time-low against the USD. But as our RBI Governor Mr. Shaktikanta Das rightly discussed that they don’t like higher volatility and their dealing room guys decide the strategy on a minute-to-minute basis, the pair remained in a given tight range before having a little breather at the end. Today, the pair is expected to open marginally lower around 79.50 levels and it is likely to trade in a range of 79.30 to 79.70 zone with an upside bias. Broadly, a stronger USD amid Fed’s tightening and safe-have demand due to recessionary fear could be warranting a caution. Thus, one can expect the USDINR pair to steadily move higher toward 80-80.50 levels in the near term. On the flip side, immediate support lies at 79.20 and 78.90 levels.”