RBI is seeking to prevent wild swings in bond markets by agreeing to pay higher interest rates to investors at bond auctions, people with knowledge of the central bank’s operations say. 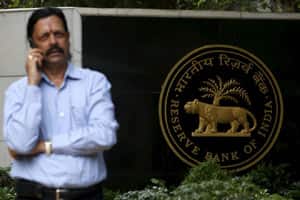 The Reserve Bank of India pabel also said that the banks have to make special efforts to step up account opening for women, and the government may consider a deposit scheme for the girl child "Sukanya Shiksha" – as a welfare measure. (Photo: Reuters)

Haunted by memories of India’s 2013 markets crash, Reserve Bank of India (RBI) is engaging in a tricky balancing act with domestic yields to keep volatility out of its bond markets ahead of the Federal Reserve’s historic policy decision this month.

The country’s central bank, is seeking to prevent wild swings in bond markets by agreeing to pay higher interest rates to investors at bond auctions, people with knowledge of the central bank’s operations say, while also buying bonds in the open market to stop yields rising too much.

Although India has outperformed many emerging markets this year, the country has not been immune to Fed jitters, with foreign investors selling around $1.7 billion in bonds and shares last month.

The people familiar with RBI operations say it is worried weak market participation at its auctions ahead of the Fed’s Dec. 15-16 meeting could trigger a selloff. In 2013, Fed “taper” fears sent the rupee to a record low

“It is best to avoid adding any negative news before the Fed,” said one of the people.

“When there is so much (bond) supply, yields can’t stay low.”

The RBI has in its past two weekly government bond auctions allotted tenders to bidders below market prices, effectively paying higher-than-normal yields.
Typically, the RBI sets a maximum cut-off yield for bids and employs a process known as “devolvement” for weak bond tenders in which the auction’s underwriting dealers buy up the shortfall in undersubscribed tenders at the cut-off yield.

“A devolving auction could mean that there is not enough demand for bonds, which sends a negative signal,” the person said.

This is why the RBI has avoided devolvement at its Nov. 27 and 20 auctions, despite tepid appetite, and has chosen to accept all bids, even those demanding yields above the majority of the bidders.

The RBI’s last devolved auction took place in June when demanded yields rose to rates that were uncomfortably high for the central bank.

Last Friday, the RBI sold 150 billion rupees of bonds, almost half of which were 10-year benchmark bonds priced at a 7.76 percent yield, 4-5 basis points higher than market rates on that day.

Another person familiar with RBI operations said the central bank is also likely to avoid devolved auctions ahead of the government’s budget in February.
“It is a conscious decision to not devolve and keep things on the safer side ahead of the Fed and the budget,” the person said, adding that devolvement will only happen if yields rise dramatically.

An RBI spokesperson did not have a comment on central bank operations.

A surprise RBI announcement on Wednesday to buy $1.5 billion of government bonds in the secondary market, however, is targeted at countering the recent rise in yields and easing tight cash conditions. The move helped push yields down six basis points on Thursday.

And as a result, yields at this week’s RBI bond auction on Friday are also likely to be lower.

However, analysts say the RBI’s current strategy comes with hazards and may perversely create more problems.

An entrenched practice of accepting bids at high yields, while supporting short-term demand, will push up the government’s 6 trillion rupee borrowing costs while open market purchases could add to inflationary pressures.

“In the past, the RBI devolved bonds when they were uncomfortable with high yields,” said Ashish Vaidya, head of trading at DBS Bank in Mumbai.

“This time, the RBI not devolving makes us believe that probably the signal is yields should be higher given demand supply dynamics.