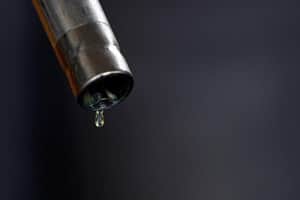 Oil prices slumped by more than 6 percent on Friday after results of a landmark referendum showed Britain had voted to leave the European Union, causing huge market uncertainty and fracturing European efforts to forge greater unity.

Financial markets have been racked for months by worries about what Brexit, or a British exit from the European Union, would mean for Europe’s stability, but were clearly not factoring in the risk of a leave vote.

The dollar fell below 100 yen for the first time since November 2013, while the pound dropped by the most in living memory.

“In the interim, it’s down for everything from equities to oil. Bad economies in the UK and Europe is not good for oil and there could be a domino effect on other economies in Asia,” said IHS oil analyst Victor Shum.

The result leaves the crude oil market in thrall to other drivers but even if the dust settles soon prices are likely to see swings, albeit around an equilibrium mark of $50, he said.

“Putting Brexit aside, the new oil order today is where we have prices and costs regulating the market not OPEC so we’re going to see more price volatility than before,” Shum said.

“The fact that the oil market is re-balancing is still going to support oil prices at close to $50.”

Japan’s Nikkei index fell more than 1,300 points, the biggest fall since at least March 2011, when an earthquake and tsunami killed nearly 20,000 people and set off the Fukushima nuclear disaster.

Early opinion polls in the United Kingdom showed the ‘Remain’ camp in the lead, giving markets a false sense of complacency. An Ipsos MORI poll put the lead at 8 points while a YouGov poll out just after polls closed found 52 percent of respondents said they voted to remain in the EU while 48 percent voted to leave.

But the result is on track to be the opposite of that. A vote to break with Europe is set to usher in deep uncertainty over trade and investment and fuell the rise of anti-EU movements across the continent.