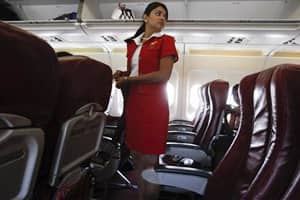 Vijay Mallya-led Kingfisher Airlines and UB Engineering share prices fell as much as five per cent today after top exchanges — BSE and NSE — announced suspension of trading in the shares of these firms from next month.

Kingfisher’s share price tumbled 4.64 per cent to Rs 1.85 — its lowest trading permissible limit for the day — at the BSE.

Shares of UB Engineering also fell by 4.96 per cent to hit its lower circuit limit of Rs 7.67.

Selling was also seen in other UB Group stocks, where UBHL was trading lower by 3.24 per cent, McDowell Holdings Ltd (-2.74 per cent) and United Breweries (-0.44 per cent).

In a major clampdown over non-compliance of Listing Agreement, top exchanges BSE and NSE had on Friday announced suspension of trading in shares of Kingfisher Airlines and another group firm, UB Engineering, from next month.

Besides, the entire promoter shareholding of these companies were frozen with effect from Friday itself.

The action follows non-compliance to a Listing Agreement clause relating to timely preparation and disclosure of financial results by a listed company for two consecutive quarters. The results are required to be disclosed by listed companies on stock exchange platform for benefit of investors.

In separate circulars, BSE and NSE had said that trading would be suspended in securities of Kingfisher Airlines and UB Engineering — both parts of crisis-hit UB Group headed by Vijay Mallya — with effect from December 1.