In a bid to control black money and broaden the tax base in the country, the finance ministry had made it mandatory for furnishing the PAN for all transactions of jewellery and bullion above Rs 2 lakh. 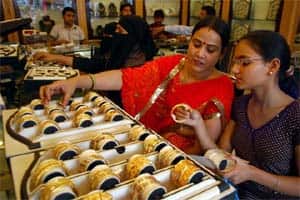 The jewellery industry is likely to suffer a business loss of 20-30% across the country with the implementation of mandatory quoting of permanent account number (PAN) by consumers. The new norm has come into effect from January 1, 2016 for all transactions worth Rs 2 lakh and above.

The jewellery business (both organised and unorganised) is estimated at Rs 3.5 lakh crore annually with majority of the revenue coming from the unorganised sector, according to the industry’s apex body All India Gems and Jewellery Federation (AIGJF).

In a bid to control black money and broaden the tax base in the country, the finance ministry had made it mandatory for furnishing the permanent account number (PAN) for all transactions of jewellery and bullion above Rs 2 lakh through all payment modes with effect from January 1, 2016. It had earlier proposed to make it mandatory for sale and purchase of items above Rs 1 lakh. The limit for jewellery purchase was previously Rs 5 lakh per transaction and for bullion Rs 2 lakh.

The industry body is planning to meet both finance minister Arun Jaitley and Prime Minister Narendra Modi to demand for withdrawal of the new norm. “The ministry seems to be confused. A piece of jewellery is not just gold, it is a product with lot of value addition and sold like a product. We don’t mind implementing the new norm, but hardly 12% of the population has PAN cards and a majority of our customers, especially in rural and semi-urban areas, do not produce PAN cards. So, it is difficult to implement the norm,” G V Sreedhar, chairman, AIGJF, said.

He said the new norm will result in the industry shifting to the unorganised sector and might lead to smuggling of gold. The industry is planning to urge the government to withdraw the new norm and instead make PAN mandatory for transactions above Rs 10 lakh, he said. “We have sought for an appointment with PM and FM during this week. We are hopeful that they will consider industry’s demand and take corrective measures,” he said.

Meanwhile, many trade associations across the country are planning to protest the government’s move and stage protest marches if the government does not take corrective action. The new norm will impact the topline of both branded and unbranded jewellery players. India’s largest branded jewellery maker Titan Company has indicated that its turnover would come down by close to Rs 500 crore.

“The cash transactions in this category amount to less than 10% of the revenue of the jewellery division. However, we do not expect any impact on our revenues for transactions made with credit cards, cheques, gift vouchers, etc,” Titan said in a statement.

“There will be impact on our sales definitely because villagers especially do not have PAN numbers and many who have don’t disclose. We have experienced this in Kerala and Tamil Nadu already,” said Baby George, CEO, Joyalukkas Group, a South-India based jewellery maker.