Drinking more than one and a half pints (0.709 litre approx) of milk… 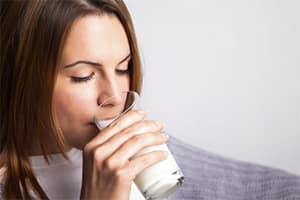 Drinking more than one and a half pints (0.709 litre approx) of milk a day could increase the risk of early death, a new study has warned.

Researchers led by Professor Karl Michaelsson of Uppsala University in Sweden found that the high levels of lactose and galactose sugar in milk mean the drink in large quantities could have a negative effect.

The study surveyed 61,000 women and 45,000 men for more than 20 years and found that there was no reduction in broken bones for those that drank the most amount of milk.

The scientists set out to examine whether high milk intake may increase oxidative stress, which in turn affects the risk of mortality and bone fracture, ‘The Times’ reported.

Men were tracked for an average of 11 years, during which time 10,112 died and 5,066 had a fracture, with 1,166 hip fracture cases. Men also had a higher risk of death with higher milk consumption, although this was less pronounced than in women.

Further analysis showed a positive association between milk intake and biomarkers of oxidative stress and inflammation.

In contrast, a high intake of fermented milk products with a low lactose content – including yoghurt and cheese – was associated with reduced rates of mortality and fracture, particularly in women.

The researchers concluded that a higher consumption of milk in women and men is not accompanied by a lower risk of fracture and instead may be associated with a higher rate of death.