Gold’s latest slide has helped wipe out half the gains from the last decade’s historic bull run, taking prices back to a key chart level… 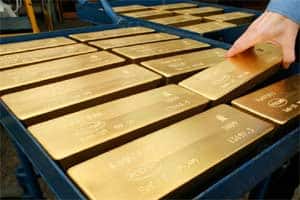 Gold was treading water on Thursday as investors stuck to the sidelines ahead of a widely anticipated U.S. rate hike next week, with even a slump in the dollar failing to trigger interest in the metal. (Reuters)

Gold’s latest slide has helped wipe out half the gains from the last decade’s historic bull run, taking prices back to a key chart level on Monday and threatening a break towards $1,000 an ounce.

Technical analysts, who study past price patterns for clues to future direction of trade, expect this level to hold for now. However, a break could see gold drop back to levels not seen in nearly six years.

“Not only is it the 50 percent retracement of the entire bull move up from the 1999 low, it’s also the approximate location of a 40-year pivot line which comes in at $1,095,” Commerzbank technical analyst Karen Jones said.

A pivot point is a key area of support and/or resistance derived from the high, low and close of a given period.

Gold’s break down to the day’s low came as sellers in the Asian time zone caught up with counterparts in Europe and the United States, who sold gold heavily on Friday after upbeat U.S. data shored up expectations for an interest rate hike later this year.

Some said ‘sell’ or stop-loss orders were triggered by the downturn.

“The support area between $1,130 and 1,135 was where a lot of stops were sitting,” Cliff Green, independent technical analyst at the Cliff Green Consultancy, said. “A lot of the move was technical stop-lossing.”

Yet some technical analysts say after a move of Monday’s magnitude, a recovery is likely to be limited.

“That could end up being too conservative when you look out three to six months from here,” Hine added.